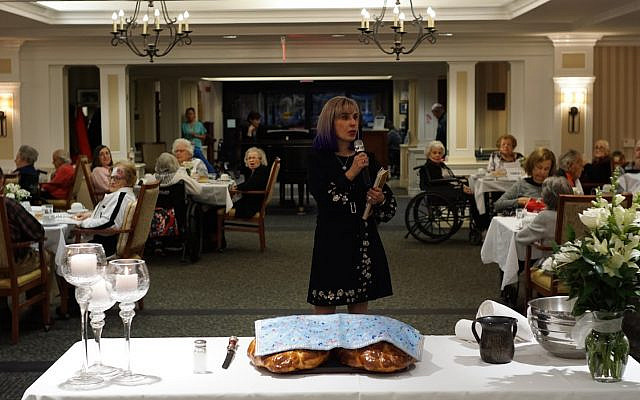 Last week, in recognition of International Holocaust Remembrance Day, we held a Holocaust Remembrance Seder on our Assisted Living campus.  We used the Holocaust Survivors Cookbook as a guide and created a menu with recipes pulled from the book. The Seder program became, as a result, the sharing of the recipe’s author’s story before that specific course or item was served.  It was a lovely evening and the stories were poignant and warm and meaningful.  They also helped to make the connection very real for everyone there, both with respect to what the survivors endured as well as how their lives continued after the war.

Of course the purpose of the Seder, as well as the day itself, is to reinforce the theme of “never again” and to both remind ourselves and educate future generations about the importance of that message.  We are all well aware that the number of Holocaust survivors is dwindling and that the first person stories we have all heard will not be available for all that much longer.

My father’s family was fortunate.  They left Poland before it was too late.  My dad would tell stories of the anti-Semitism that he experienced as a child.  I remember him talking about leaving school and being chased by a gang of older kids who were throwing rocks at him and yelling “Dirty Jew.”  He climbed a tree and hid among the branches until it was safe and when he descended, there was a man standing there who told him, very clearly, that he was not welcome to hide there and that if there was a next time, he would make sure the boys found him—or worse.

Yet my dad never talked about the war and the impact it had on the rest of his extended family.  There are photo albums, now ones that I own, with pictures of family members I cannot identify.  Dad knew who they were but could never bring himself to speak their names, much less talk about what happened to them.  I asked more than once but the answer was always the same, his lips would tighten and his bright blue eyes would glisten with unshed tears.  I learned to let it go.

As an adult I have tried, granted without any real effort, to find out what happened to the rest of his family.  I looked up the little town in Poland where he was born, one of the few things I know, on a Jewish genealogy website. There were many people with the last name that I knew they had before coming to the United States.  All of those names were followed by an indication that they’d been lost during the Holocaust, that no one survived.

Their stories, what they endured, are lost to us.  There is nothing to pass on because there is nothing to share.  And I wonder, in truth, if my children or grandchildren would find the stories meaningful, too far removed from their lives and their life experiences. It begs the question, of course, as to how we preserve this history that must be preserved, how we teach the lessons that must be taught.  We must continue to look for ways to create connection, using approaches like the Holocaust Remembrance Seder.  We must capture these stories and find ways to make them relevant to ourselves and future generations.  We cannot let this recent past fade into ancient history, it matters too much—to us and to the world in which we live.