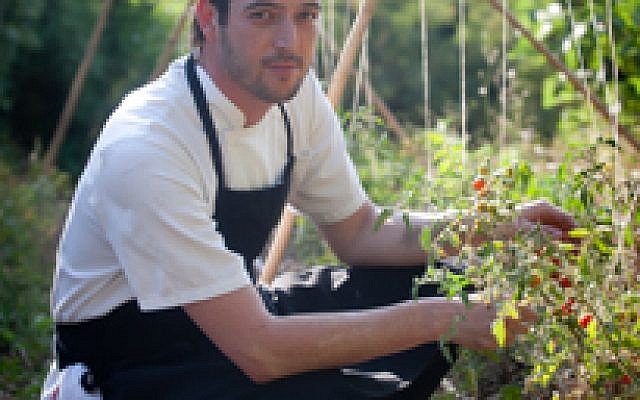 I’ve never been interested in cooking. Eating, yes. Cooking, not so much.

I come by it honestly. My mother always made sure that her husband and three children ate well, if blandly; from what I’ve heard of her mother’s cooking that benevolent disinterest came straight down the maternal line.

But I am lucky. I married a man who can cook.

Andy’s mother couldn’t cook either, he tells me. She was the recording secretary of the Chicago teachers’ union, a big job that left her with no time for the domestic chores she disliked anyway. She deputized her sons, and they learned. It was nothing fancy – at first it was often just how to open a can – but by the time we met Andy cooked well, and he’s just got better.

Most of the time when our children were young I was the one who was at home with them, and I did manage to get them adequately if boringly fed. But when Andy cooked, it was just so very much better.

Andy cooks our Shabbat dinners now. He researches recipes, orders food, starts working in the kitchen. I stay away, hear crashes, muffled curses, metallic bangs, and then smells start wafting out. Little nosefuls of heaven. Eventually I sidle in and try to nibble at tiny little bits of thing, edges of food, and I do that until he notices. Eventually he always does notice.

It’s not that I don’t do anything for those dinners. I invite guests (there’s an art to matching people that comes clearer with time and through mistakes), I make salads (I’m good at that because it’s a matter of tossing in more and more and even more things in, mixing them up, and adding garlic and olive oil, and what doesn’t taste better with garlic and olive oil?), I set the table, bring out the food, and clean up at the end. It’s also my job – also learned through experience — to make sure that there’s enough wine, more than we’re likely to need, because there’s nothing more festive than having enough wine, and nothing less festive than furtively eying a bottle and wondering if those few drops at the bottom possibly could be yours, only to see them dribbled elsewhere.

But Andy cooks, and his food is the centerpiece of every Shabbat dinner at our house, and I love it.

My daughter Miriam also married a man who cooks. Dave always has been interested in food, he said, and when he was in rabbinical school he started to experiment. He’s more sure of himself than Andy, more quick to ditch the recipe and work with whatever he has at home.

He can make brisket – a dish I usually eat dutifully but unenthusiastically – into a silken tangle of bliss. He can make chicken taste like almost anything except basic boring chicken. He can make vegetables taste so fresh that you’d swear they’re not even picked yet.

For Chanukah, Dave makes fried chicken using a beer batter that is not flaky but instead encases perfectly moist chicken with the most satisfying crunch imaginable. For Shavuot, he makes miracles with cheese.

But summertime is best.

Dave has a smoker in his backyard; he had it modified so now a large metal pipe comes out of it and leads to a separate grill. He fills the smoker with wood, and then takes the meat or fish he’s prepared with a homemade rub a day or two before and puts it on the grill. The fire is not in the same device as the food, which is slow-cooked not by flame but by smoke.

Hours later, he takes out the food and puts it on the table in front of his aroma-drunk guests. And then there are no words, just the sounds of eating, and involuntary moans of pleasure.

I wish that I could get the pleasure from cooking that Andy and Dave get. There seems to be something about the rhythms of chopping and mincing; the dance of timing, knowing when to drop something into the boiling water or the hot oil and when to take it out; the music of sizzling and steaming and slicing; the beauty of fresh herbs and vegetables, with their vivid colors and often improbable shapes, the magic of the chemistry that changes shapes and colors and textures when you add water or heat. It’s a deeply sensual pleasure, that’s clear.

But I get the deeply sensual pleasure of eating the food they make, and glorying in the love that’s probably the common and most essential ingredient of all.