The Blogs
Eliezer Finkelman
Apply for a Blog
Please note that the posts on The Blogs are contributed by third parties. The opinions, facts and any media content in them are presented solely by the authors, and neither The Times of Israel nor its partners assume any responsibility for them. Please contact us in case of abuse. In case of abuse,
Report this post. 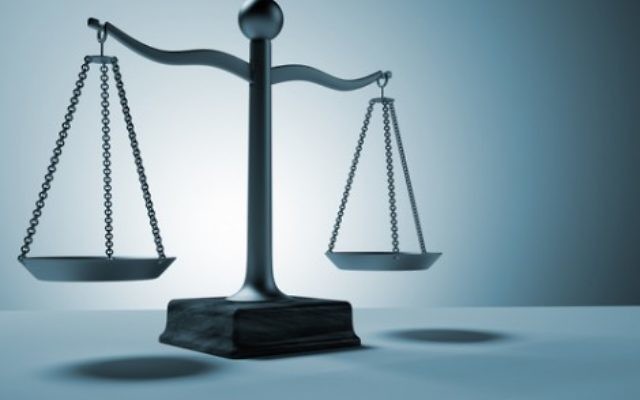 Illustrative. Scales of justice. (via Shutterstock)

I dedicate this post to the memory of my late friend, David Dolinko.  We were schoolmates from second or third grade through high school graduation.  He went on to earn a Ph.D. in Philosophy, and then a law degree, and served as Professor of Law at UCLA for many decades. He wrote about the philosophical underpinnings of laws punishing criminal behavior.  David Dolinko was among the most brilliant thinkers I ever met – which says a lot, since my life has been blessed by encounters with a collection of extraordinary brilliant thinkers.

Does the impulse to act with mercy contradict strict justice?

Apparently yes, according to Rabbi Yehudah as recorded in the Talmud.

Rabbi Yehudah audaciously answers an astonishing question, “What does God do every day?” Rabbi Yehudah’s description of the divine schedule:  “The day has twelve hours.  During the first three, the Holy Blessed One sits occupied with Torah. During the second three, he sits and judges the entire world. When he sees that the world deserves destruction, he stands up from the throne of justice (Hebrew “din”) and sits on the throne of mercy (Hebrew “rahamim”).   . . .  During the fourth, he sits and plays with the leviathan (Avodah Zarah 3b).”

In the Selihot, the penitential prayers that appear so prominently at this time of year, we repeatedly refer to God as “King sitting on a throne of mercy.”  The prayer implies that same God could also sit on the throne of justice.

Maimonides, of course, warns us not to take literally any description of God as sitting, or standing, and not to indulge in the idea of the throne as anything but a metaphor for rulership (Guide of the Perplexed 1:9).  I leave that thought for another discussion.  Today I want to focus on the two thrones.  Apparently “the throne of mercy” cannot also serve as “the throne of justice,” because justice and mercy remain incompatible.  Even if we allow the thrones as metaphors, the notion that God relates to us sometimes in one mode and sometimes in its opposite seems highly problematic.

Kabbalistic texts also make a sharp distinction between the sephirah of hesed (kindness) and the sephirah of gevurah (power).  According to Reshit Hokhmah, a sixteenth-century source, “Chesed is Pure Kindness, though only to the meritorious, as is the reward of the righteous in Gan Eden. Gevurah is Pure Judgment and retribution to the guilty, as is the punishment of the wicked in Gehenom” (1:9).[i]

But what can we do?  Mercy and Justice negate each other.  They cannot coexist without breaking the law of contradiction. So we speak of the one God, just and merciful, as if relating to us from different sephirot, or sitting on different thrones. We have to, because justice contradicts mercy, and mercy contradicts justice.

But what if they do not?

How do Justice and Mercy really relate to each other? My late friend, David Dolinko, with modesty typical of him, called his inquiry into the question,  “Some Naïve Thoughts about Justice and Mercy.”[ii]

He states the paradox in these words:

Mercy is ordinarily conceived as a virtue, as a free gift rather than something to which one has a right or entitlement, and as something distinct from justice (to which, of course, one does have a right). In appropriate cases mercy “tempers” justice, producing a different outcome than justice alone would call for. Yet isn’t a deliberate departure from the requirements of justice an injustice?

Punishment itself, of course, has long been a source of contention-why is it ever justified? The principal answers that legal philosophers have given are either consequentialist (deterrence, reform, or incapacitation) or retributivist (focused on giving the offender what he deserves).

The paradox arises primarily for retributivist notions of justice.  A consequentialist, I think, does not even have to admit that anyone deserves punishment; the punishment merely has to deter other potential offenders, or take this offender out of circulation, or serve some other beneficial end.  For a retributivist, the offender truly deserves her punishment.  Withholding the punishment amounts to injustice.

Dolinko observes, though, that justice does not mean the same punishment for the same crime. A nearly infinite number of circumstances can go into calibrating a just punishment.  Perhaps the offender has boasted of the crime, shown no remorse, or taunted the victim after the crime.  Or, perhaps, the offender suffered an abusive upbringing, or was coerced into participating in the crime, or cooperated with law enforcement after the crime, or shown remorse.  If the judge decides finds more of these mitigating factors relevant to sentencing, then we could call the judge merciful.  However, Dolinko argues, those mitigating factors themselves – if relevant – are not separate from justice.  “Rather, the merciful judge, like one who does not show mercy, imposes on the defendant the sentence the judge believes he deserves, given the relevant circumstances-but takes a more expansive view than her hard-line colleague as to precisely what those circumstances are.”

Theoretically, justice requires “the same punishment for the same crime.” In practice, each crime has its unique aspects. Judges may reasonably differ about which factors have relevance, but that disparity does not seem unjust to Dolinko.  Unfair, and unjust, disparities come when judges take into account invidious factors, such a race, religion, sex, or personal animus.

Dolinko’s applies his analysis to criminal law as enforced in the courts.  It seems to me that the analysis has relevance to theology.  When we envision God as a judge, the supreme judge, we may not need to see God exercising incompatible divine attributes, sometimes judging the world with merciless justice and at other times with unjust mercy, sometimes sitting on one throne and sometimes on another. Rather we can envision God simultaneously understanding all our failures, and all the mitigating circumstances of our failures.

Dolinko finishes his “Naïve Thoughts” with the observation that “. . . I make no pretense of having ‘solved’ (nor ‘dissolved’) any issue. I have tried only to propose a different way of looking at the problem, hoping it may contribute in some small way to the ongoing discussion.”

About the Author
Louis Finkelman teaches Literature and Writing at Lawrence Technological University in Southfield, Michigan. He serves as half of the rabbinic team at Congregation Or Chadash in Oak Park, Michigan.
Related Topics
Related Posts
Comments