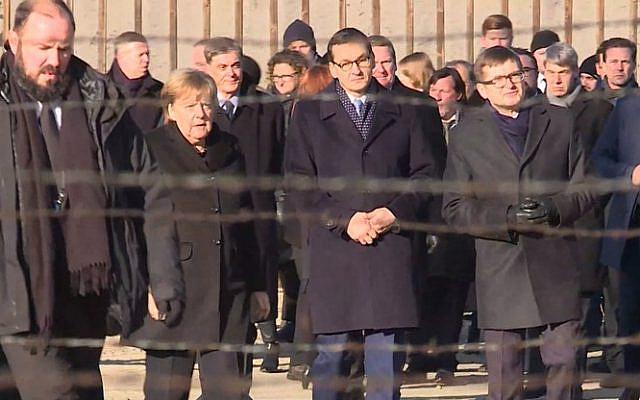 It was a bit surprising to learn that today’s visit of Angela Merkel at the grounds of the former German Nazi Concentration and Death Camp Auschwitz Birkenau is only the 4th ever formal visit of German chancellor at the site.

A quick overview of those visits gives a unique understanding of how collective memory in relation to Auschwitz  was constructed and how it changed over time.

In 1977 it was Helmut Schmidt to come first to the other side of the iron curtain to start with the words “This is a place that commands silence. Yet, I am certain the German chancellor cannot remain silent here.”  Schmidt during WWII saw both the Eastern and Western fronts as solider and was granted the German Iron Cross. In Auschwitz he recognized Germany’s  guilt following in the footsteps of his predecessors especially Konrad Adenauer and Willy Brand. He stated that Poland had suffered the most without making a specific reference to the Jews. In his closing remarks it is worth to point the universal message that shall be taken seriously at all times, XXI century included “There is no escaping the realization that politics requires an ethical basis and a moral order,” 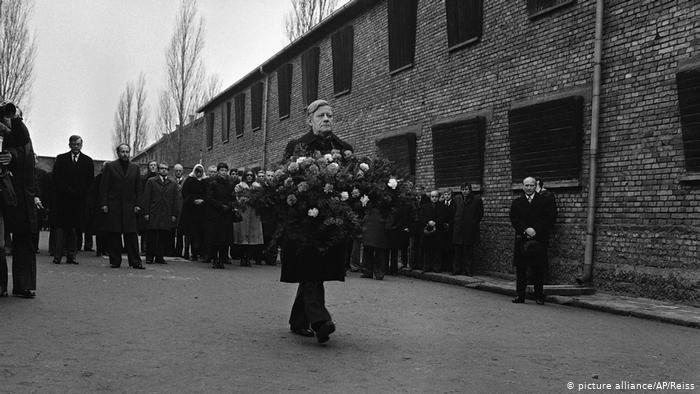 The early November 1989 Helmut Kohl visit to Poland had to be cut short as the Chancellor was needed to cheer the downfall of the Berlin wall and kick start the unification of Germany. Auschwitz was cut short. But he returned two weeks latter  with a journalistically described as “quick visit” to Auschwitz, a place which in the words of Kohl was described as  “minefield”. In his speech he have expended the list of victims. ”The warnings emanating from this place must never be forgotten. Unspeakable hurt was inflicted on various peoples here, but above all on European Jews, in the name of Germany.”

One more quote is worth citing, as it stresses a major cognitive problem humanity has in dealing with the immenseness of Auschwitz, as historical fact and geographical space.

“The image of that place, one that has been completely robbed of all words, must be taken in physically,”

The visit was also wrapped around a new Polish- German cooperation agreement and financial aid to Poland in painful economic transition.

Recalling the recent 50th anniversary of the outbreak of World War II in Europe on Sept. 1, 1939, when Germany invaded Poland, the document stated that ”the large toll of life exacted by that war warns and exhorts us to achieve a relationship of lasting peace between the two states and peoples.” Kohl will latter prove to be a great proponent of Poland joining NATO and EU. In spite of that  Polish president Lech Walesa was not invited to Berlin in April 1995 for the official 50 Anniversary of the end of WW II. The whole political commemorative space was taken by the 4 victors US, Great Britain, France and Russia. No wonder, as there was still no language to talk and embrace the victims into the commemorative political ceremonies. At the same time the role of the Polish Army as the 4th largest army within the Allies was once more obliterated. The offense was deep.

In an attempt to mend what was torn in creating politics of memory of Polish-German relations Chancellor Kohl returned to Auschwitz in July 1995. He followed his phrase from January that year.

“The darkest and most awful chapter in German history was written at Auschwitz.”

Not too many words were used following the statement: “The suffering and death, the pain and the tears of this place, leave us speechless,” Kohl wrote in the Museum guestbook on that visit. “Commemorating together, mourning together and acknowledging our will to be together — that is our hope, our path.”

The images of Chancellor Kohl laying wreaths at Auschwitz and Birkenau side by side with former inmate and at that time Polish minister of foreign affairs Władysław Bartoszewski circulated the news agencies globally. 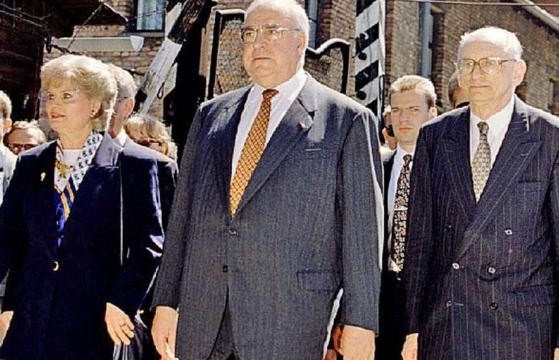 This absence is confronted just now with a risky and brave visit of Angela Merkel.  In her 14 years of holding the office she has proved herself to be able to take unpopular and risky decisions motivated more with moral responsibility then the real politics. She is just now walking the “minefield of Auschwitz” side by side with Polish prime minister and survivors. Her visit emphasizes  the new dimension of Holocaust and Auschwitz memory. Dimension which could be described and awareness and responsibility. Those two values are important both historically, in relation to sites like Auschwitz, but also contemporary in the more brutalizing world around us. She has proved herself in both. She stood up and broke the paralyzing indifference of world leaders in the face of recent refuge crisis. She proved to be aware and responsible and  has and will pay a political price for this. In today’s visit she extends the definition of awareness and responsibility into the domain of history. German and European history. She is walking the “minefield or Auschwitz” to increase awareness just ahead of 75th Anniversary of the former camp liberation. She is also one of the first politicians visiting the site to take financial responsibility for the Auschwitz Museum preservation. Museum which has been and still is the only guarantee that the physicality of Auschwitz will last, meaning the memory will last. We are very visual creatures. We remember as long as there are survivors and physicality of a site. The longest lasting memories are created by survivor at the site.  There are two pillars of memory the oral testimony and physical site.  The survivors will soon lose their physicality and continue to exist only through their testimonies. Angela Merkel today with additional 60 million Euros donation from Germany for the site preservation shows also responsibility for the future of Holocaust education.