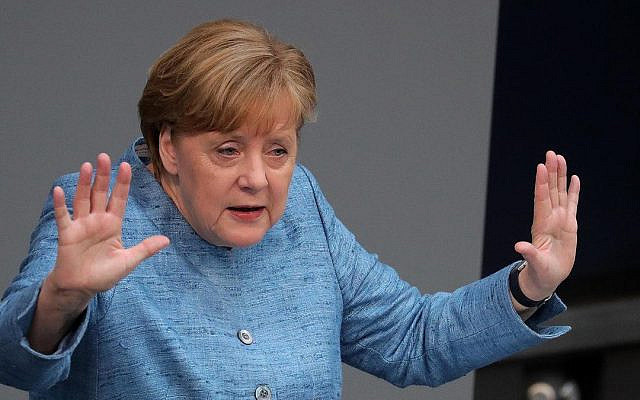 Out-going German Chancellor Angela Merkel visited Israel last month as a part of her fair well tour and received high praise from Israeli officials for supporting Israel during her tenure as the leader of Germany. Merkel also received praise from U.S. Jewish leaders for her efforts to fight antisemitism in Germany. Yet with all of the accolades Merkel has received, in my humble opinion Merkel royally failed in condemning and fight back against the Iranian Ayatollah regime’s repeated antisemitism and Holocaust denial during her tenure as chancellor. Likewise, during her tenure Merkel failed to stop the Jew hatred generated by mosques in Germany that were funded by the Iranian regime and stopping the relationships shared between a German municipality and an Iranian city whose officials promote antisemitism. Ultimately, Merkel deserves no praise from Jewish groups or Israel because she and her administration again and again refused to speak out against and refused to condemn the vile Jew hatred generated by the Iranian regime during her years in office.

Likewise, the Merkel government which claimed to be fighting anti-Semitism never once condemned the anti-Semitic attacks Jews in Iran faced during her tenure. For example, in May 2020, the synagogue next to the tomb of Esther and Mordechai in the Iranian city of Hamedan was fire bombed by unknown assailants. While there was no damage done to the tombs, the synagogue did receive extensive smoke damage, but Merkel and the German government did not utter one word condemning the attack on this holy Jewish site in Iran. Additionally, in 2019, three antique Torah scrolls were stolen by unknown thieves from the centuries-old Ezra Yagoub synagogue located inside Tehran’s Jewish ghetto and the regime never investigated the crime. Merkel’s government said nothing about this anti-Semitic crime and failed to question the Iranian regime’s leaders about it. Also in December 2017, two synagogues located in the Iranian city of Shiraz were vandalized by unknown assailants who left a total of five Torah scrolls and numerous prayer books damaged or totally destroyed. Again, not one word of condemnation came from Merkel or her government members. The list of anti-Semitic attacks on Iran’s Jews and vile anti-Semitic comments made by the Iranian regime’s authorities are too extensive to list during Merkel’s tenure, but her silence and the silence from members of her government to the endless flow of rampant Jew-hatred spewing from the Iranian regime revealed her hypocrisy in championing the fight against antisemitism and Holocaust denial.

Since its inception in 1979, the Iranian regime’s numerous religious, political and military leaders have repeatedly called for the destruction of the Jewish state of Israel in public events and broadcasted television programs. The Iranian regime has also for more than four decades held its annual “Al Quds” day public event calling for the genocide of the Jewish people in their homeland of Israel. Moreover, the Iranian regime has even required every child in Iran’s schools to chant “Death to Israel” on a regular basis because of their vile desire to fill the minds of young children with hate for Jews and hate for the Jewish state. And despite this very open and public call for a second genocide of the Jews, Merkel and all of her government officials never condemned nor denounced the Iranian Ayatollahs for their disgusting policy of calling or the destruction of the Jews! Shamefully Merkel also did not object when the president of Germany, Frank-Walter Steinmeier, sent a congratulatory note to Iran’s clerical rulers on the occasion of the anniversary of the Islamic Revolution this year, in “the name” of the German people. Merkel’s silence to the Ayatollahs’ repeated calls for another Holocaust against the Jews spoke volumes to the regime who to this day continue their calls for the destruction of the Jewish state and its inhabitants.

Something Stinks In Baden-Wurttemberg

Another disturbing aspect of Merkel’s government in failing to stop anti-Semitism and failing to condemn the Iranian regime’s Jew-hatred came from Michael Blume, the commissioner appointed by the government in the southern German state of Baden-Wurttemberg to fight anti-Semitism in the state. Blume not only liked a Facebook post likening Zionists to Nazis, but Merkel’s cabinet ministers continued to tolerate Blume’s alleged high-intensity antisemitic activity on social media. Moreover, Blume has failed to stop the sister-city program between the city of Freiburg which is located in Baden-Württemberg and the Iranian city of Isfahan. When I asked Blume on Twitter earlier this year why he and his office have failed to stop the partnership between city officials in Freiburg and Iranian officials in Isfahan who want the destruction of the Jewish state, he replied he was unable to force any German government official to do anything. Blume’s failure to fight antisemitism even resulted in the Los Angeles-based Simon Wiesenthal Center calling for his resignation. At the same time, Merkel and her government officials failed to condemn or stop the sickening Jew-hatred preached in many of the Iranian regime’s funded mosques in Germany. The Blue Mosque, the Islamic Academy and the Islamic Center of Hamburg in recent years hosted countless Iranian regime religious and political officials who not only spew Israel hate but also anti-Semitism there. And again, Merkel and her government officials never condemned the mosque nor called for it to be shut down despite its anti-Semitic history.

Ultimately Merkel failed in condemning and fight back against the Iranian Ayatollah regime’s repeated antisemitism and Holocaust denial during her tenure as chancellor. She does not deserve praise from Israeli officials nor Jewish leaders worldwide when it comes to her supposed fighting of antisemitism. Merkel and her government officials during their reign of power were only interested in maintaining Germany’s economic ties with the Ayatollah regime and keeping the regime’s petro-dollars flowing into German banks. Therefore, she and her officials shamefully stayed silent to regime’s policy of Jew hatred and repeated Holocaust denial. The future German governments and officials have a responsibility to stand up and condemn the Iranian Ayatollahs for their sickening antisemitism and Holocaust denial if they are serious about honoring the memory of the six million Jews slaughtered by the Nazi regime.