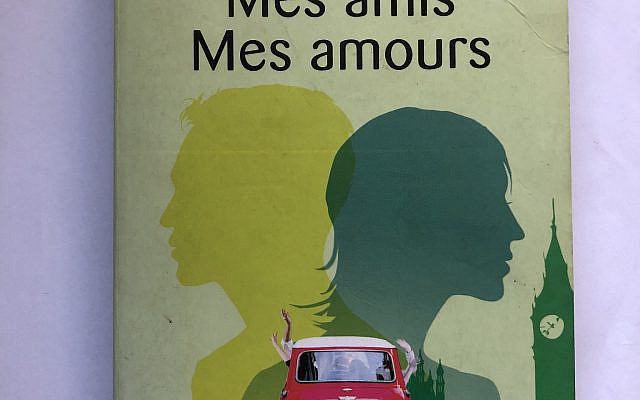 In this novel by Marc Levy two Frenchmen in their 30s,, one separated the other divorced, and each one with custody of a child, are living in London. As the book begins they are sitting in a park in Paris, watching children play and guessing how long the man on a nearby bench has been divorced. (This book is in French, and is part of my quest to read in that language from time to time.)

Antoine, who is divorced, has already established himself in London, where he has opened an architectural office and has acquired part of a house in a pleasant Kensington street. His friend, Mathias, has just lost his job in a Paris bookshop, and Antoine suggests that he join him in London just as an opportunity arises for him to take over a bookshop specializing in French books in the same area. Mathias duly moves to London (in pre-Brexit times this presented no great bureaucratic difficulties, and the Eurostar train made travel between London and Paris quick and hassle-free), joining Antoine in his house, which they convert from two flats into one unit.

In addition to the bookshop and the architectural office, the quiet street contains a café-restaurant run by Yvonne, an older woman who is also from France, as well as a flower-shop run by Sophie, who is younger (and French too). Various other (non-French) characters make brief appearances in the narrative, mainly Mr. Mckenzie, who helps to manage Antoine’s business and is also sweet on Yvonne, and Mr. Glover, the elderly Englishman who is the former owner of the bookshop taken over by Mathias, and who is also very fond of Yvonne. Mr. Glover retires to a cottage somewhere in Kent, and Yvonne promises to visit him there one day.

The children, Antoine’s son Louis and Mathias’ daughter Emily (both aged about eight), are good friends, growing up together as brother and sister, and playing an important part in the lives of their respective parents. The two go to school together, play and watch TV together after school, and constitute objects of affection as well as occasionally also something of a burden for their respective fathers.

When Mathias meets Audrey, an attractive French journalist, matters become complicated, impinging on the friendship between the two men. Among the house rules imposed by Antoine was that they would not use babysitters or bring women into the house. Naturally, it becomes increasingly difficult for Mathias to adhere to this injunction, and his frequent infringements of it begin to affect the relations between the two friends. Matters are further complicated by the fact that Mathias suffers from vertigo, and is unable to tolerate ascending in a life to a restaurant on the top of the high-rise OXO building. Among the more endearing facets of the book are the frequent references to actual physical locations in and around London, presumably based on the author’s knowledge.

Antoine and Mathias take their children on a short vacation to Scotland, where they visit and stay at various castles in search of the ghosts which supposedly haunt them. They devise a plan to renovate Yvonne’s run-down café, and this venture is achieved over the course of the weekend when she finally goes to visit Mr. Glover in Kent. What happens then is unexpected, and as the book draws to a close all the individuals have reached decisions about what they are going to do with their life.

In the epilogue, grown-up Louis and Emily are sitting on a park bench, taking bets on how long the man on a nearby bench evidently caring for a child on a swing has been divorced.

While not being particularly profound, this book gives one an insight into the workings of the mind of French men, as well as some idea of what life was like for French exiles living in London on pre-Brexit times.