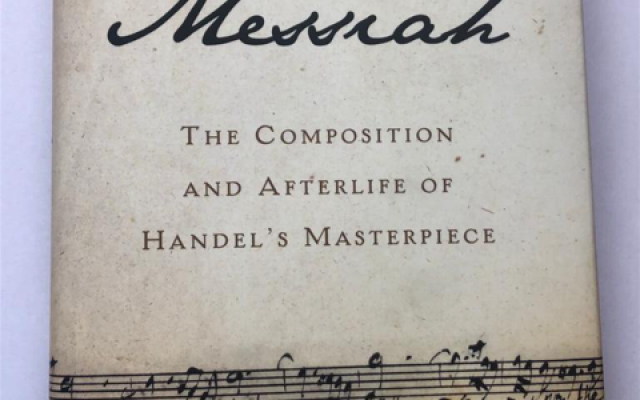 Attending an annual performance of Handel’s oratorio Messiah has been part of my life since childhood, and I have tried to pass this tradition on to my own children and grandchildren whenever and wherever possible.

Over the centuries since its first performance in Ireland in 1741 many legends and myths have developed around the oratorio, and this small book (only 150 pages) seeks to put the record straight about how, when and why Handel wrote it, and what happened to it after his death.

George Frederic Handel was born in Halle, Saxony in 1685, studied composition with various teachers, and also briefly attended Halle University as a law student. In 1703 he moved to Hamburg, where he joined the opera house orchestra as a violinist and keyboard player. It was there in 1705 that his first opera, Almira, was performed. In 1706 he travelled to Italy, visiting Venice and Florence before reaching Rome. He composed his first oratorio, Il trionfo del tempo e del disinganno there in 1707, and in the next two years composed and performed in various cities in Italy.

In 1709 he returned to Germany and was appointed Kappelmeister to Georg Ludwig, Elector of Hanover, who was crowned King of England in 1714. Handel followed him to London that year, providing music for various royal events and serving as music teacher to the king’s children. Handel composed and performed operas and oratorios based on dramatic events or characters described in the Bible. The texts for these were generally provided by his friend and collaborator, Charles Jennens, and were performed in London and throughout England to general acclaim.

Jennens, who compiled the biblical verses which comprise the text of Messiah, was a devout Christian, and an active member of the Anglican church. In fact, it was Jennens who devised the original concept of Messiah, and sent his outline for it to Handel. Messiah was distinguished from previous oratorios by being devoid of a dramatic narrative line. It is divided into three parts, the first one portraying biblical prophecies regarding the coming of a future redeemer, the second the events around the birth and death of Jesus, and the third the message of redemption that is the essence of Christianity.

Parts of the book are fairly technical with regard to the scoring and performances of the oratorio, but on the whole the author provides a clear and erudite account of his subject, which is clearly one for which he feels great affection. The book concludes with Jennens’s outline of the content of Messiah, a bibliography, and a timeline giving the main dates and events in Handel’s life.

However inspired the texts selected by Jennens might be, the music written for them by Handel is something that is sublimely uplifting, taking the listener to spiritual heights that transcend any and every denomination or religion. This would seem in part to account for the widespread and enduring popularity that Messiah has enjoyed for hundreds of years. However, its popularity did not come immediately after its first performance in Dublin. It was only a decade later, when it was performed in London to benefit the recently established orphanage in Bloomsbury known as the Foundling Hospital, that it gained wide recognition. In the course of that decade Handel made adjustments to the music and the orchestral scoring to better suit the instruments and soloists at his disposal for its performance in various venues, as was customary at that time.

Thus, the original score of Messiah was destined for a much smaller orchestra and choir than is generally used in contemporary performances unless an attempt is made to reconstruct the more intimate ensemble used in Handel’s day. Nowadays performances tend to stress the stately and almost overpowering nature of the music, especially in the choral sections, rather than cherishing its more intimate, sincere and transcendent aspects.

Be that as it may, a performance of Messiah gives the listener an opportunity to commune with humanity’s better aspects, to transcend everyday life and ascend to the spiritual heights that only great art and inspired artists can provide.