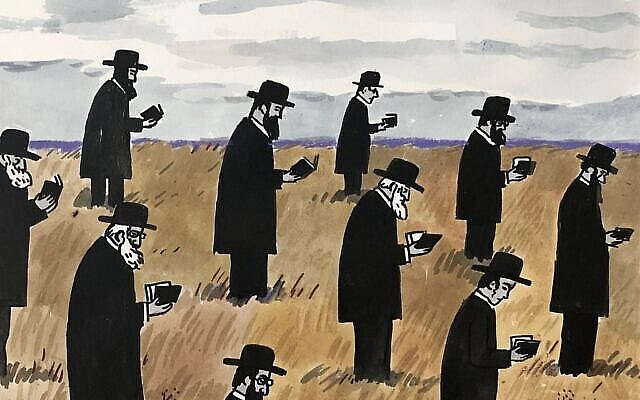 This year, at Congregation Agudath Sholom in Stamford, CT, where I reside, congregants had the choice of davening at one of five different minyanim on Rosh Hashana and Yom Kippur.

There was the service in the main sanctuary, of course.  But there were also four additional minyan choices: 1) a hashkama minyan that started at 6AM, 2) a minyan in the chapel with a slightly faster pace, 3) a Sephardic minyan, and 4) an outdoor tent minyan.  And for those who like to find God in nature, there was an Erev Rosh Hashana sunrise minyan at the beach.

On Sukkot, the shul also had a choice of five different minyanim.  And on Simchat Torah, a day when traditionally there has always been one large minyan, our shul offered a gender-specific and age-specific choice for davening: a women’s tefilla service and a teen minyan.

Welcome to the age of micro-minyanim, a trend that I have noticed happening in shuls a little bit before the COVID pandemic hit, and which has grown in popularity since that time.

I’m not talking about non-sanctioned minyanim at people’s homes, which has been occurring for a couple of decades now.  I’m referring to shuls formalizing smaller minyanim as part of the synagogue’s tefilla offerings, to meet individual demand for specific kinds of prayer services.

How did this phenomenon occur?  Should shuls embrace the desire for smaller and different kinds of minyanim on Shabbat morning, and does this endanger the goal of making congregants feel they are all part of one shul and the value of davening in a large group?

In order to better understand what is happening, it might be helpful to look at the history of our shul in Stamford, which I believe mimics what has occurred in other Orthodox shuls across the country.

After World War II, in the late 1940s, a young RIETS graduate named Rabbi Joseph Ehrenkranz, z”l, was named the spiritual leader of Congregation Agudath Sholom.  The shul’s membership consisted mostly of older European-born families, and there was not much activity at the shul.  Rabbi Ehrenkranz quickly realized that if the shul and the community were to survive, he needed to make the shul appealing to the younger American-born families.

Through his charismatic personality, his intelligent programming, and changes that he implemented in the prayer services, Rabbi Ehrenkranz was able to grow the membership to more than 800 member families by the 1960s, making it the largest Orthodox synagogue in New England.

About 80% of the members were not shomer Shabbat, but they chose to align themselves with an Orthodox synagogue because many of the needs they were looking for were being addressed by the shul.

The highlight of the year was always Rosh Hashana and Yom Kippur, where everyone – and I mean everyone – packed into shul.  The sanctuary, plus the social hall behind it, was filled to capacity with close to 2,000 people.  For many it was the only time they attended the shul during the year, but they all came in droves – to hear an inspiring message from the rabbi … to say Yizkor … to hear the melodies of the High Holidays chanted by the chazzan.

The large High Holiday minyanim at the shul continued into the 1980s, when we first moved to Stamford.  However, by the late 1980s, the demographics at the shul were beginning to change, as more and more observant families had begun moving into the community – and the percentage of shomer Shabbat families became higher.  A small group of families desired a minyan during the High Holidays that had more of a ba’al tefilla than a formal chazzan lead the services – and their wish was addressed with the implementation of a parallel minyan in the chapel.

A couple of decades later, several families asked Rabbi Daniel Cohen, who is the current morah d’asra of the shul, about a hashkama minyan at 6AM on Rosh Hashana, which was billed as a strict no-talking-during-davening minyan and a way to allow males to finish their tefilla … and then watch their infants while their wives attended a later minyan to hear shofar blowing.  That minyan, too, was approved by the shul, and has been running for close to 10 years now.

COVID forced all of us outdoors last year and the year before in large tent minyanim for the High Holidays.  However, in a survey conducted during the summer, the shul discovered there were many people who actually liked davening outdoors in a tent … and a few who were still more comfortable outdoors because of COVID.  So the shul answered this demand this year with a small tent minyan on Rosh Hashana and Yom Kippur.

And yes, there is a growing interest for a Sephardic minyan in Stamford – so Rabbi Cohen and the shul made space for 60 people this year to organize a Sephardic service on the Yamim Noraim.  There will also be a monthly Sephardic minyan on Shabbat morning after the chagim are over.

Many shuls would not be as accommodating to these micro-minyanim as our shul here in Stamford.  Their argument is that it breaks up the feeling that everyone is a member of one shul. In fact, the Young Israel of Stamford — where my wife and I are also active members – outgrew its sanctuary for the High Holiday services this year, and opted for one large outdoor tent minyan rather than two smaller minyanim.

It’s a valid argument. There are other Orthodox shuls that continue to resist parallel minyanim, especially shuls that are smaller in size.  If you only have 50 or 75 total congregants, it’s silly to have three or four separate minyanim, even if there is a demand.

Personally, I applaud the shuls that are making accommodations for these alternate minyanim.  It demonstrates that they are listening to their members concerns and their needs.  In a crude but still accurate sense, congregants really are consumers, and minyanim are goods.  And just like a company would be wise to deliver the kind of goods consumers desire, shuls must deliver the kind of minyanim their congregants want.

That’s not to say that I don’t miss the large minyan gatherings of old. As we know, there is power in davening as part of a large group. (Anyone who has davened mincha at the Siyum haShas with 20,000 other Jews, or who has been at the Kotel for a major event or holiday, can appreciate this.)  There is an important concept of “Berov Am Hadrat Melech,” which we shouldn’t lose sight of.

Perhaps a nice compromise is once or twice a year – during a special weekend or when a scholar is in attendance —  everyone at the shul gathers together in one minyan, and the micro-minyanim are suspended for a week.  Or if the timing is right, everyone gets together for one kiddush after attending different minyanim.  There are ways to address the unity issue without compromising on the desire for smaller and more targeted minyanim.

What do you think?  Please feel free to share your thoughts directly with me.