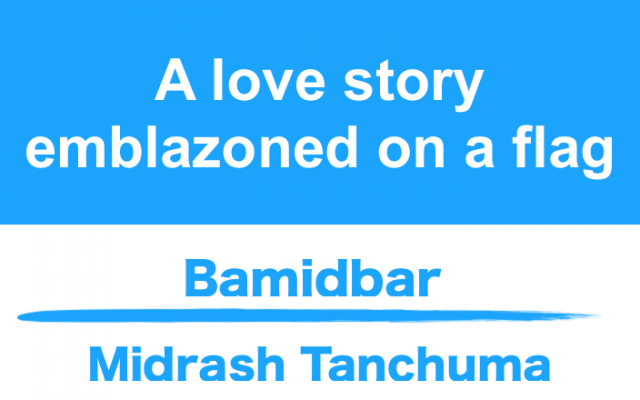 Bamidbar seems like a most uneventful Parsha. It starts with the Jews being counted. At the end of the Parsha the tribe of Levi is counted separately and given instruction for packing up and traveling with the portable Mishkan (Tabernacle).  Yet through the eyes of the Midrash every step of the way is another sign of God’s love for the Jewish people.

The significance of listing a precise date

The first verse of the Parsha tells us exactly when the census started:

The Midrash points out that the dates of seemingly more critical events, like when Jerusalem was destroyed, seem to be obscured. In fact, we don’t know the day the flood started or the great dispersion in Genesis. The point is, when an event  glorifies the Jewish people, like the census, the Torah is precise.

You only count what’s precious to you

The census is described as  to literally, “raise the head of the whole congregation of the Children of Israel” (Numbers 1:20).  By raising them up in this way, it showed God’s love for them

“I have not cherished [any] nation more than you; therefore I have given you a headcount which [is my way of] holding you high”

The Jewish People wanted what the angels had

The Parsha mentioned that the Jewish People traveled in a precise formation. Each tribe had its own flag. This too was a sign of love:

“The Holy One, Blessed be He, cherished Israel with great love, in that He appointed them flags like [those of] the ministering angels.”

Midrash Tanchuma supplies the back-story to the flags. It wasn’t God’s idea for each tribe to have it’s own flag. It seems that during the giving of the Torah on Mt. Sinai myriads of angels appeared in formation with flags. The Jews asked God if they too could travel in formation with flags. Out of great love, God granted their wish. In fact each flag was the color of the stone that represented each tribe on Aaron’s breastplate.

Interestingly, the formation in which they traveled has its origins when the Jews were still in Egypt

Carrying the casket in formation at Jacob’s funeral

It seems that Jacob gave precise instructions regarding his funeral procession before he died. The Torah tells us that he made sure that he wouldn’t be buried in Egypt. The Midrash adds that he arranged for who would carry his casket and in what formation they shall proceed.  Including the instruction that Joseph was forbidden to carry the casket because he was royalty in Egypt. Furthermore, his third son, Levi, should not carry the casket. According to the Midrash, Jacob knew that one day his tribe would be carrying the holy ark (containing the 10 commandments)  and the Mishkan.

This relates to the reason that the Levites were counted separately.

Why the Levites count

Originally the first born were going to serve in the Mishkan and in the Temple of Jerusalem. However, in the episode of the Golden Calf, the Levites exemplified complete loyalty to God. Unlike the first born, they did not worship the idol. When Moses rallied the nation against the golden calf, only one tribe heeded his famous battle cry:

“Moses stood up in the gate of the camp and said, “Whoever is for the Lord, come and join me!” And all the Levites rallied to him.” (Exodus 32:26)

The tribe of Levi took up arms against those who worshiped the Golden Calf. This was particularly difficult because it involved their fellow Jews, including those from other tribes who may have married into their own families.

When giving proper attribution was a matter of life or death

Midrash Tanchuma discusses a notion that seems out of context. When telling over something that you heard from someone else, the Torah encourages you to always quote it in the name of that person who said it.

It sounds like a very admirable trait but is it really that critical? The Midrash brings a proof from  the Book of Esther that this attribute had an important role in saving the entire Jewish People from genocide.

If you recall, the story starts out with Mordechai overhearing two people plotting to kill King Achashverosh. Queen Esther makes a point to telling the king that it was Mordechai who uncovered the plot.

The two men are executed and the King records in his special book that Mordechai saved his life.

Fast forward to when Haman is encouraged by his wife and supporters to share his final solution of his Jewish problem with the king. Haman is so excited he knocks at the palace door at midnight. However the king was awake because, according the Megillah:

The commentators reveal which king we are talking about. At that moment the compassion of the King of the universe was aroused and God intervened subtly, and masterfully, in Jewish history.

Why couldn’t the second most powerful man in Persia talk his way  out of Esther’s accusation?

What would you expect Haman to say when Esther accused him of trying to kill out her race?

“Thank you Esther for pointing out this travesty of justice. I will aggressively investigate this matter and you have my word that I will put to death whoever was responsible for this reprehensible plan to kill our most cherished, loyal citizens of the Jewish faith.”

Can you hear it?

Lies and hypocrisy at the highest levels of government – surely par for the course, today and certainly in the days of imperialist world powers. So, why didn’t Haman have a comeback to deflect blame and defuse the situation? I believe that Haman was traumatized by being forced, just moments earlier, to publically honor a Jew that he so despised. Instead, he got himself deeper in trouble as the evening wore on. What happened to the suave politician who rose to power by manipulating the king’s ego in the story of Vashti? Apparently God’s meticulous timing of events out-maneuvered Haman. It could not have happened if Esther had not made a point of crediting Mordechai with saving the king’s life.

The power of Esther giving credit to Mordechai, is parallel to the flags which our forefathers proudly displayed in the desert. Esther was saying to the king that she is not taking credit for saving the king’s life, rather the credit goes to Mordechai. Similarly, the flags were a form of giving  attribution to God for His love of the Jewish People. By carrying flags they were not attributing any glory to themselves or their accomplishments, rather they were naming the true source of the Jewish People’s glory.

“The Holy One Blessed Be He said to Moses, I will make them flags for My name. Why? Because they are My children, as stated (in Deuteronomy. 14:1), ‘You are children of the Lord your God.”’

What goes on your flag

Perhaps the point of the Midrash is that, like our ancestors, we should proclaim God’s role in our lives for all to see.