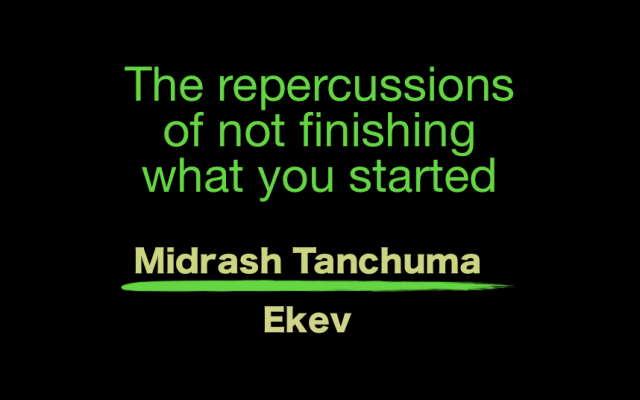 On his deathbed, Yoseph made his brothers take an oath that they would carry his bones out of Egypt and bury them in Israel.  Indeed, while the Jews on the night of the Exodus were busy asking their Egyptian neighbors for valuables, Moshe fulfilled the oath of his ancestors. He went to the Nile river and proclaimed that God has kept his promise to redeem the Jews. Yoseph’s coffin rose from the Nile.

Moshe could obviously not complete the task of bringing Yoseph’s coffin to Israel because he was not able to enter the Promised Land. Subsequently he was not credited in the Book of Joshua as the one who brought Yoseph’s coffin to Israel. That may seem unfair but the Midrash insists that the credit should go to those who finish the job. However, when you examine Judah’s interactions with his brother Joseph, not finishing what you started had grave consequences.

Yehuda, king of his brothers

Midrash Tanchuma sees Yehuda as the brother who was clearly in charge. The one who could have saved the day. When the idea first surfaced about killing Joseph, Yehuda was able to put an end to it.

“Then Yehuda said to his brothers, ‘What do we gain by killing our brother and covering up his blood?” (Genesis 37:26)

Unfortunately, after starting the Mitzvah of saving his brother from harm’s way Yehuda proposes an alternate plan of selling his brother.  In some respects this act was even more heinous and repugnant. A crime for which he paid dearly. According to the Midrash, for not finishing the effort to save Yoseph’s life,  Yehuda lost his wife and two children.

Selling your own brother, how could Jewish history take such a tragic turn

The Midrash Tanchuma on Parshat Vayeishev has a surprising answer. God planted the idea in Yaakov’s head to make Yoseph a coat of many colors. God was literally sewing the seeds of jealousy into the relationship between Yoseph and his brothers. It was all part of God’s plan to bring Yaakov and his children down to Egypt.

”He (God) resorted to subterfuge to ensure events unfolded this way. He made Yaakov love Yoseph, so that his brothers hated him (Yoseph), and as a result they sold him to the Ishmaelite’s, who brought him to Egypt.” (Midrash Tanchuma Vayeishev)

That same Midrash says something else startling,  After the sale of Yoseph, the brothers agreed to excommunicate anyone who tells their father Yaakov the truth – that Yoseph was not killed by a wild animal, but rather sold to a passing band of slave traders. However, there were only nine brothers present – Binyamin was at home, Yoseph was sold and Reuven was away. Since you need 10 to excommunicate someone, God agreed to be the tenth. This seems to go along with the idea that the sale of Yoseph was simply God nudging along Jewish history. Why does Yehuda deserve such a severe punishment if he was simply helping God carry out His plan to bring Yaakov and his family down to Egypt? Furthermore, is the punishment fair?

Why should the next generation suffer for Yehuda actions?

How can Yehuda’s innocent children die for the sins of their father. A commentator to the Midrash, Eitz Yoseph, tackles this head on. He says that children are only punished for the sin of their father if they continue the iniquity of their father. Evidently, when Yehuda’s son, Er, refused to impregnate his wife (spilling his seed) he was exhibiting the same character traits as his father – cutting off future generations. It’s perhaps more evident in the case of Er’s brother, Onan. He spilled his seed  because he did not want to have a child who would be a reincarnation of his brother Er. He killed his brother’s chances of coming back into this world again.

How do we reconcile Midrashim that characterize the sale of Yoseph as part of God’s plan, with those that see Yehuda as deserving of a severe and far reaching punishment?

We must embrace the dialectic and conclude that they are both right. In the incomprehensible complexity in which God runs the world Yehuda can be punished for doing what needed to be done. Selling his own brother was still a test he failed. This concept is familiar in the Torah. Pharaoh was supposed to enslave the Jews but he was not supposed to torment them. He both fulfilled his role as God’s messenger but was punished for taking it too far.

The Talmud says that Nero Caesar was sent to destroy the Temple but he did not want to be God’s messenger. He shot arrows in all four directions and each time the arrow fell in Jerusalem. He then asked a child what verse he learned today and it was a verse in Ezekiel (25:14) which described how the Jews will be  punished through the hand of Edom (Rome).  His divine role was clear yet he still refused:

“If I continue on this mission, I will eventually be punished for having served as God’s agent to bring about the destruction. So he fled and became a convert, and ultimately Rabbi Meir descended from him.” (Talmud Gittin 56A)

Why the emphasis on finishing what you start

Why did the Midrash see it as such a moral imperative to finish a Mitzvah that was started. Furthermore, what does this have to do with Parshat Eikev. Perhaps this is the major theme of the Parsha. Moshe is beseeching  the Jewish people  – you went forty years in the desert, don’t stop now. Continue the sacred mission of the Jewish People in the Promised land.

Of course, the message is aimed at us as well. This Parsha contains the second Paragraph of the Shema. If you keep up the virtuous lifestyle that was started  so many generations before us. “If you listen” (Deuteronomy 11:13)  to these divine teachings there will be  great rewards. But “be careful”  (Deuteronomy 11:16) not to default on the the sacred mission of the Jewish People. The outcome will be swift and unpleasant.

Yehuda got  a second chance

Perhaps the reason the Midrash brings an example from Yehuda is because he took to heart the lessons he learned which enabled him to pass his next big test. This test required him to display the exact character traits he lacked before. Instead of cruelty to his own family, he displayed amazing sensitivity. Instead of lying to cover up his crime (by dipping Yoseph’s coat in blood) he admitted to himself that he deceived his daughter in law, Tamar. After his first two sons died, Yehuda told her to wait until his third son grew up, but he never intended for that son to marry her. Tamar took matters into her own hands and dressed up like a prostitute to have relations with Yehuda. When she was found to be pregnant, Yehuda publicly admitted that he unwittingly had relations with his own daughter in law when he could have had her put her to death and no one would have known the truth. (‘To admit’ is one of the roots of the Hebrew word Yehuda).

For growing, learning and admitting his failings Yehuda regains his position as head of the family So much so that his father blesses him that all the kings of Israel and ultimately the Messiah, must come from the tribe of Yehuda.

Perhaps the message of the Midrash is that if you don’t follow through on a great deed that you started, you have killed the potential for bringing goodness to the world – much like what Er and Onan did. And much like Yehuda almost did, except for the fact that God had bigger plans for Yoseph.