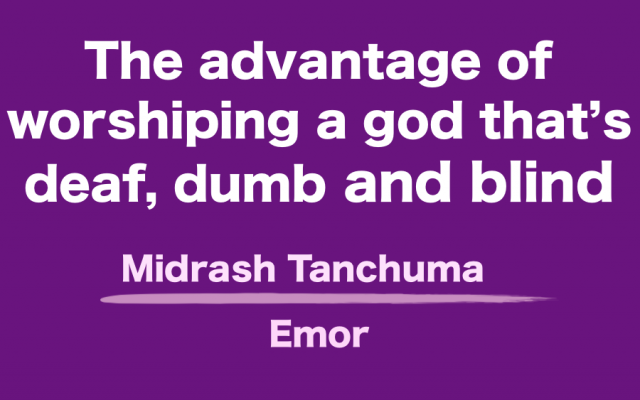 According to Midrash Tanchuma it’s no coincidence that laws pertaining to Kohanim (the priestly class) immediately follow the prohibition against necromancy – communicating with the dead:

“G-d said to Moses: Speak to the priests, the sons of Aaron, and say to them: Do not defile yourself among the [dead] of your nation.” (Leviticus 21:1)

The previous Parsha ends with this verse:

“A man or a woman who seeks to communicate with [the dead through] a ghost or a familiar spirit shall be put to death…” (Leviticus 20:27)

A living G-d vs. a god that is dead

The Midrash see the juxtaposition of priestly laws and the prohibition against necromancy as a plea from G-d to the Jewish People. When you seek spiritual guidance don’t forsake your eternal G-d for someone raised from the dead.

It wasn’t just the practice of raising up the dead, that the Midrash was condemning,  rather the practice that plagued the Jewish People until the destruction of the First Temple. Namely, worshiping gods that are dead. As king David described false gods so eloquently in Psalms (which became part of our Hallel prayer):

The Midrash makes reference to one example from Kings II. Unfortunately the books of the Prophets are replete with them.

Choosing the ‘lord of the flies’ over Elijah the prophet

It’s hard for us to imagine.

In the days of Elijah the Prophet, a Jewish king, Ahaziah, suffered a serious accident. He is wondering if he will survive. Instead of appealing to Elijah, the king sent messengers to inquire of a false god of another country called  baal zvuv (master of the fly!)

G-d tells Elijah to intercept the messengers and send them back to the king with the following message:  “Is there no G-d in Israel” (II KIngs 1:3) that you have to seek out a false god from a foreign land! The king is further told that he will indeed die from his injury.

How does the king react? He sends out 50 soldiers to capture Elijah. G-d saves Elijah and they all die. The king sends another 50 soldiers. They too meet their death. When a third battalion is sent, the terrified commander realizes it’s a suicide mission and pleads with Elijah not to harm them. Elijah accompanies the soldiers back to the king and tells the king to his face that he is going to die. Soon after, the king dies.

Sadly, it has no lasting effect on subsequent kings. It provides them no clarity to distinguish between their living G-d and the dead gods around them.

King Saul – the exception that proves the rule

The Midrash provides a story of another king who did not inquire of a prophet. We learn new insights into the fascinating story of King Saul on the day before his death.

In the book of Samuel II, King Saul is fearful about the impending battle with the Philistines and tries to inquire of G-d about the outcome of the battle. However, all divine channels (the High Priest and prophets) are blocked for him. Out of desperation, he brings the prophet Samuel up from the dead. Samuel is angry and tells Saul that he had no right to drag him up from the dead, especially since Samuel already told Saul (in person) that his kingship would be ripped from him. However,  the Midrash added a new piece of information which was devastating to Saul.

Early in his kingship, Saul violated a direct order from G-d by not killing the king of Amalek. It was at this fateful moment that the prophet Samuel informed King Saul of the dire consequences. Saul would be replaced as king by:

But only now, after being brought up from the dead, does Samuel reveal the identity of  “the one more worthy. “ It was Saul’s nemesis, David. Saul was taken aback and asked why Samuel didn’t tell him this in the first place. According to the Midrash, Samuel answered that he’s now in the “next world.” It’s a world of truth. No mincing words, no political expediencies, just the cold, hard truth.

Saul finds out that he and his sons will die in battle the next day. He heroically accepts his fate and doesn’t reveal this information to his generals or his sons.

The Midrash says that G-d was so impressed with Saul’s valor that G-d summons the angels to show them how courageous a mortal man can be.*

King Saul was a man who lost his moral footing. His jealous rage against David led him to mass murder. When David was running for his life from Saul, David spent one night in a city of Kohanim called Nov.  When King Saul heard that this city harbored David he ordered that every man, woman and child be killed. That’s why Saul was denied access to all forms of divine counsel.

The Midrash said that not only did King Saul know that necromancy was a terrible sin, he himself was on a campaign to wipe out all those who practiced it. Yet he succumbed to this vile medium of foretelling the future. Ironically, he used nefarious means to communicate with a true Prophet of G-d. In doing so G-d presented him with the biggest moral test of his life. Saul fully accepted G-d’s judgement and, according to the commentaries, he was awarded a coveted place in the “next world” next to the Prophet Samuel.

The military exploits of Alexander the Great

The Midrash goes on to relate 2 military encounters of Alexander the Great. The first is against a nation of all women. The Queen of the nation puts a stop to Alexander before he can even start. She tells him that if he plans to wage war against her country, there can only be 2 outcomes. Alexander wins and is the laughing stock of the world for taking on a country of women. Or Alexander loses and it’s an even bigger embarrassment. Alexander concedes and goes on his way.

His next encounter is with a country identified only as “Africa.” The King of this African country offers to show Alexander the integrity of their justice system. Alexander agrees to sit in on an argument between 2 litigants. One person sold his neighbor a dilapidated house and when the buyer knocked it down he discovered gold. The seller of the house claimed that the gold rightfully belonged to the buyer and refused to take the gold back. The buyer claimed that he has no right to the gold and the seller should be forced to take the gold. The judge found out that one claimant had a daughter and the other had a son. His final ruling was that the son and daughter should marry so both families benefit equally from the gold. Alexander was flabbergasted and said that if he was the judge he would have killed the 2 litigants and stolen the gold.

Alexander the Great reflected the moral values of the pagan gods of  Macedonia. What attracted ancient people to idolatry was the fact that religious practices were spiced with witchcraft, black magic and sexual immorality.

But perhaps their most attractive characteristic is that there were no moral consequences to their actions.

That is exactly the contrast that the Midrash wants to present. The Priestly class were the teachers. If you seek true moral guidance – turn to them. If you want to throw off the yoke of morality, choose a god equipped with a mouth that can’t speak, eyes that can’t see, and ears that can’t hear.

*This show’s that Saul’s death was a sanctification of G-d’s name. He heroically  accepted G-d’s decree. Yet, at the same time, the death of the very first Jewish king at the hand of the Philistines can be seen as a desecration of G-d’s name. This dichotomy occurs throughout Jewish history. When Jews sang “Ani Maamin – “I believe in G-d with perfect faith” while entering the crematoria, this is a sanctification of the name of G-d. (Perhaps  G-d even pointed this out to the angels). However, the Holocaust can certainly be seen as a desecration of the name of G-d as well.