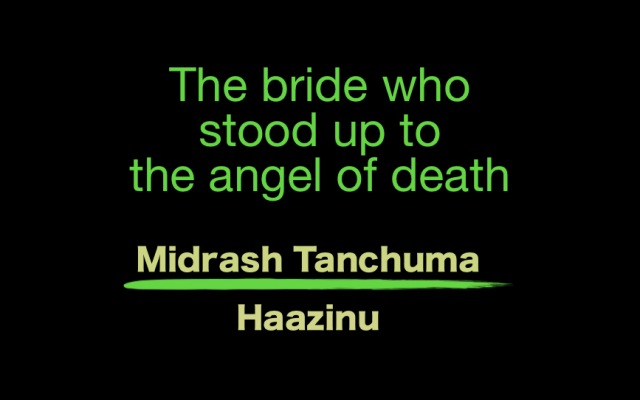 Last year I quoted a hauntingly, beautiful story from the end of Midrash Tanchuma, Haazinu. I would like to take another look at what the message of the story is – especially because (as I noted) it is read before Yom Kippur.

A tale of two brothers

There were two brothers who lived far from each other. One was very wealthy and he had one child – a beautiful and pious daughter. Unfortunately, her first two husbands died on their wedding night. When it happened a third time she realized, with great sorrow, that she can never marry again.

The wealthy man’s brother was very poor. He had 10 sons who worked very hard cutting down trees and selling lumber. Despite their efforts, they struggled to put food on the table. The oldest son, sensing the pain of his father over their desperate situation, prayed to God for assistance and resolved to visit his rich uncle. The young man was warmly received at his uncle’s house. After he settled in and felt comfortable, he mustered the courage to declare that he wanted to marry his uncle’s daughter – his cousin.

Everyone began to cry.

They explained that he was putting his life in danger. His uncle offered him a large sum of money to abandon the idea, but the young man insisted. The young woman agreed. The parents reluctantly proceeded with the wedding.

Among the wedding guests was Elijah the Prophet, disguised as an old man. He took the groom aside and advised him that a hideous-looking, poor man will show up at the wedding. When the groom sees this man he must show him great honor and give him food and drink. Sure enough a man who fit this description appeared and the groom seated him in a place of honor and provided him with many delicacies. After the ceremony, the unsightly-looking man took the groom aside and informed him that he is the Angel of Death and he came to take him.  The groom pleaded for one week with his bride (Sheva Brachot), but the Angel of Death would not even grant him one day. The groom asked permission to say goodbye to his bride. This request was granted. When his bride heard the news she told him that she needed to speak to the Angel of Death alone. She approached the Angel of Death and told him that under no uncertain terms can he take her husband because it would constitute an explicit violation of a verse in the Torah.

“When a man takes a woman for a wife, he shall not be conscripted to the army nor be assigned to it for any purpose; he shall be exempt for one year so he can be home to bring joy to his wife that he has married” (Deuteronomy 24:5), (She added): And the Holy One, Blessed Be He is true and His Torah is true”

But the bride did not stop there. She threatened to take the Angel of Death to heavenly court if he dared repudiate the truth of the Torah by taking her husband’s soul. Her stirring words reached the heavens and God himself intervened and rebuked the Angel of Death, who immediately departed.

In the middle of the night her parents got up, assuming they would once again have to dig a grave. To their surprise the groom was still alive in the morning. When the word spread, the whole community celebrated together.

Haazinu is read before Yom Kippur and I saw the story as a message about the raw power of prayer, even under dire circumstances. If your arguments are holy and legitimate, don’t be afraid to bare your soul to God.

I’d like to approach the same story from another perspective based on what the Midrash discusses prior to this poignant tale. This may also answer why this story is chosen as the grand finale of Midrash Tanchuma Haazinu.

The Midrash relates another story where an angel threatened someone’s life. However, instead of the angel of death, we are dealing with holy angels in heaven. The person threatened was none other than Moshe for the crime of trying to bring the Torah down from the heavens to the Jewish people.  Moshe tricked the angels by lying (or downplaying) what he was holding – the ten commandments. Among the many opinions of the commentators, Moshe tricked the angels by saying “You’re angry because of these insignificant things!” or “You’re angry because of these laws which have no relevance to you!” The angels let Moshe go, not realizing that he would be transmitting the ten commandments as well as the entire oral and written Torah.

Are you allowed to lie to angels?

You could say, it was for a good cause. Furthermore, it dovetails with a similar story in the Talmud where the angels were once again objecting to Moshe Rabeinu bringing down the Torah. God tells Moshe to respond to the angels. Moshe asked God to quote from the Torah and God sites the ten commandments. With each commandment Moshe challenged the angels “where you slaves in Egypt, do you conduct business for which you need a warning not to swear falsely, do you have parents that you have to honor…”  Like in our story of the Bride, the angels get the message and back off.

In another section of the Midrash, preceding the wedding story, we have a story of  someone making a demand of God. King David tells God that he and his friend deserve riches from God’s storehouse. After all, God’s storehouse is vast and it should probably go to the righteous. Like the bride, this was a bold but honest assessment so King David had no shame in beseeching God with his request.

Could it be all about charity

I came across a commentator to Midrash Tanchuma, called Zechira Lehaim, who asserts that the story is all about the power of charity, As it quoted widely in the Talmud and from many other sources “Charity saves one from death” (Proverbs 10:2 and 11:4). When the groom followed Eliyahu’s advice and fed the disheveled, old man (the Angel of Death), God was able to rip up the decree against the bride and the groom.

Continuing on that theme, I always wondered why the rich brother didn’t take an interest in his poor brother. If Charity is indeed the lesson, perhaps it was the rich uncle graciously taking in his poor nephew that changed the fate of the bride and groom.

As we say in the evocative  Nesaneh Tokef Prayer on the High Holidays;

“And repentance, and prayer and charity can overturn a negative decree.”

Moshe and King David bring clarity to the story

The charitable acts of the groom and his father in law also reaffirmed their faith in God. If you believe that all money belongs to God, then giving charity doesn’t really constitute a net loss. It wasn’t your money to start with. This is why King David had no qualms about asking God for money.

Moshe, King David and our Bride all had tremendous clarity as to who runs the world – which comes in handy when you’re praying for your life on Yom Kippur.