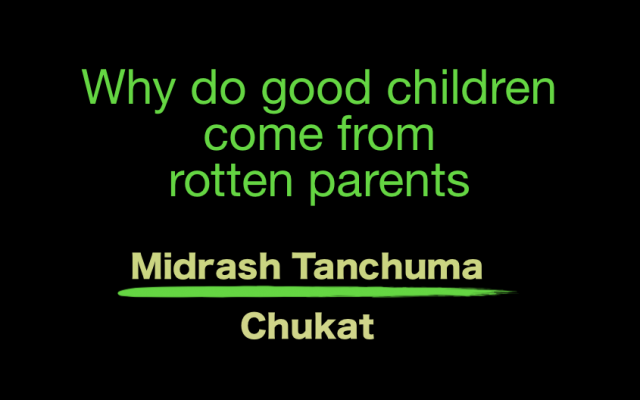 This is the Parsha of conundrums. The very name of our Parsha, “Chukat,” comes from “Chok” –  a law that we don’t understand. How do the ashes of a red heifer bring ritual purity yet those involved in its preparation become ritually impure?

One approach of the Midrash seems to offer a very practical answer: If you’re having trouble understanding how something good (ritual purity) can emerge from something bad (ashes that defile those that prepare it)? Here are some examples from life that are so much more difficult to understand, you won’t be concerned about the Red Heifer anymore:

“[Who], for example, [brought forth] Abraham from Terach, Hezekiah from Achaz, …Israel out of the nations of the world, the world to come out of this world?”

How is it that Abraham, the father of monotheism,  emerged from Terach who, according to the Midrash, ran a cash and carry idol shop.

If you learn the book of Kings II you can’t fathom how Yotam was a righteous king yet his son Achaz was so wicked. Achaz adopted one of the most perverse kinds of idol worship called Molech. It was worshiped by passing your child through a fire. That’s the optimistic opinion. Other commentators say he actually burnt his child to death. Achaz also put idolatry in the Temple of Jerusalem. Wouldn’t you know it, his son was the righteous King Chizkiyahu. The Talmud says that if the people would have been on a higher spiritual level, God was prepared to declare Chizkiyahu the Messiah.

It should come as no surprise that Chizkiyahu’s  son, Menashe, was evil.

Next conundrum. How did the nation of Israel emerge from the nations of the world? It’s true God provided our ancestors and subsequent generations with a unique set of learning and growth opportunities. However, Jewish history shows these lessons to be short lived. Most Jews seem to be running away from Judaism’s hard fought lessons.

Lastly, how could the world as we know it transform itself into a world where swords will turn into plowshares?

Yes, it is one of Maimonides’ principles of faith:

“I believe with perfect faith in the coming of the Messiah, and, though he will tarry, I will anticipate, daily, his coming.”  But can you write the script as to how events will unfold? That’s exactly the point. God is behind each of these events so we can’t expect to figure it out.

What are the limitations of human understanding

Now that we have an inkling of what we don’t understand, the Midrash inquires about how much can be understood. The answer is, it depends on your intellect. Shlomo was described as “Wisest of all (HaAdam) the man” (Kings I 5:11) The Midrash sees in this strange wording, that Shlomo was wiser than Adam.

How wise was Adam? According to Midrash Tanchuma, God showed the angels that Adam could do something the angels couldn’t do. Namely, Adam named all the animals, he named God and he named himself.

Adam named himself “Adam” because he was formed from the “adamah” – the earth. The animals were also formed from the earth. However the animal’s formation was more akin to vegetation that sprouted out of the earth but does not resemble the earth. But Adam wanted to emphasize that he was literally formed from (earthen clay) into which God blew a Neshama (soul). A commentary on Midrash Tanchuma, Be-er Hamamorim, says there’s something deeper in the name Adam.  God wasn’t showing off Adam’s wisdom to the angels, rather he was showing off Adam’s humility. Adam  could have said  that the word “Adam” comes from the Hebrew word “Domeh” meaning “similar.” In which case Adam would be stating that his name is Adam because he is “similar to the Divine .” This kind of haughtiness appears later in history to provide Nebuchadnezzar, king of Babylon, a grandiose vision of himself. Yet Adam, who ruled over the entire world (until Eve came along) was humble enough to say “My name should be Adam because I was formed from dirt.”

The interplay between wisdom and humility

Perhaps the point of the Midrash is that humility is a central component of wisdom. King Shlomo was a tragic example. He violated the Biblical injunctions for kings not to amass wives and wealth. He thought that he was too wise to be affected by such excess, but it was not the case.

The notion of tempering wisdom is aptly expressed in Pirkei Avot:

No matter how earth-shattering your discovery, God runs the world

The Midrash brings a story that seems to drive this point home:

“A certain person was going from the land of Israel to Babylon. While he was eating, he saw two birds fighting. One killed the other. The victorious bird then took an herb and placed it in the dead bird’s mouth and brought the dead bird back to life. The person watching took the very same herb to bring the dead back to life. When he arrived at Tyre ,he found a dead lion. He touched the herb to its mouth. The lion came back to life, got up, and ate the man.”

Perhaps the moral of the story is, if it was God’s will to give man the ability to revive the dead, it would have happened.

The wisdom of knowing what we don’t know

According to Midrash Tanchuma, Parshat Chukat is giving us permission to let go of the assumption that everything can be understood.

We’ll simply never comprehend the mysteries of the  Red Heifer, or why good kids come from rotten parents.  Or visa versa.