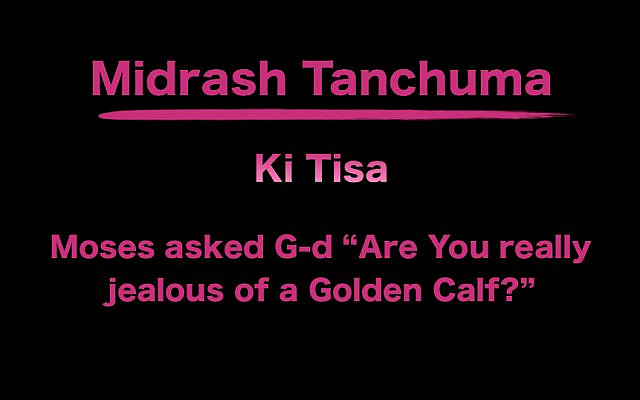 Our parsha starts with the counting of the half Shekels that were used in building the Mishkan (Tabernacle). However, it’s a bittersweet endeavor because part of the reason for building the Mishkan was to bring  atonement for the sin of the Golden Calf. Nevertheless, Midrash Tanchuma finds great blessings among the adversity.

“Ki Tisa” is generally assumed to mean “When you count.” However the Midrash feels that the  literal meaning is what counts. “Ki Tisa” means “When you lift up” or “When you carry” which is perhaps why the Midrash derived so many “uplifting” messages.

Moses was clearly trying to uplift the Jewish People and secure them forgiveness for the sin of the Golden Calf. Moses prayed intensely and used many different creative arguments. He pleaded to G-d to consider what the Egyptians will think – that G-d freed the Jews from bondage (with great fanfare) only to kill them in the desert. He told G-d to “Erase me from Your book” if the Jews were not forgiven. He went up Mount Sinai again to pray for another 40 days and 40 nights. All of this can be found in the Parsha. The Midrash, however, introduces another tactic used by Moses. Although It may seem incredulous and disrespectful, it certainly shows the amazing relationship between Moses and G-d.

Surely you don’t see an ox as competition

“Master of the Universe, are You really jealous of an ox? Is he Your helper? Do You bring the winds while he causes the rain to fall? You make the sun shine, and the moon to glow? You cause the trees to grow, can he make the blossoms sprout? After all, the ox is powerless; it merely eats grass and then is slaughtered.”

According to Midrash Tanchuma, this bold gambit by Moses did have a positive outcome. G-d responded by offering to start a new nation from Moses and his descendants. Moses does not even respond to the offer. Rather he took it as an opening to pray and petition G-d to forgive the nation. Which he did.

The Midrash continues on the theme of uplifting the Jewish People by seeing something enormously positive in the building of the Mishkan.

Reframing the building of the Mishkan

The Mishkan is a forerunner of the Temple in Jerusalem. Except it’s portable and much smaller. True, we may not have needed a Mishkan if it wasn’t for the sin of the Golden Calf. However the Midrash sees in the Mishkan an incredible message of beauty and hope for the future. The logic of optimism goes like this:  If something so wonderful as a Mishkan can emerge from our sins,  imagine the rewards that can emerge from our positive deeds:

“If the great sin (of the Golden Calf) lead to the Mitzvah and privilege (of building the Mishkan), then following G-d’s precepts could certainly lead to something even greater.”

The Midrash brings an even more astonishing example of a positive outcome from tragedy.

Sell Joseph and save the world

If we adopt the same attitude towards the story of Joseph and his brothers, something extraordinary emerges. Because Joseph was sold into slavery in Egypt he was eventually in a position to interpret Pharaoh’s dream about the 7 years of plenty and the 7 years of famine. This, in turn, saved the world from starvation and death.

“If due to one meeting in which the brothers (of Joseph) sat in unity, with one mind, decided to sell Joseph, and it resulted in the sustaining the world through seven years of famine, when they act meritoriously, how much more (benefit and goodness would be bestowed upon the word).”

What amazing positivity from a painful story of epic disunity.

Matchmaker, matchmaker, lift me out of my loneliness

Midrash Tanchuma brings another example of G-d raising up people in an amusing exchange between a Roman Noblewoman and Rabbi Yosé the son of Halafta. She asks:

“In how many days did the Holy One, Blessed Be He, create the world?” “In six days,” he replied.… “What has he been doing since that time?” she queried. “(He replied) He has been uniting couples and making one man wealthy and another poor.”

She dismissed this as something even she could do herself. To prove her case she took 1000 of her male slaves and arbitrarily paired them with 1000 of her female slaves. The next morning she found the truth in Rabbi Yosé the son of Halafta’s statement. Many of her slaves were suffering from broken bones due to “irreconcilable differences” with their forced mate.

The nations of the world accused the Jewish people of committing a crime beyond salvation. Forty days after hearing the Commandment: “Don’t have any other gods before me,” a Golden Calf was declared to be a god! The world assumed that G-d could not overlook such a fundamental breach of trust. However,  the Mishkan sent a clear message to the world that the Jewish People have been forgiven, In the words of the Midrash:

“Yet, thanks to (the intervention of) Moses, G-d gave the Jews the opportunity to lift their heads in pride once again. As it says (in the opening words of the Parsha) “when you uplift the heads.”

This is reminiscent to me of something Rabbi Soloveitchik wrote regarding the claim of  Christian theologians who said that “the Holy One has taken away from the Community of Israel its rights to the Land of Israel, and that all of the biblical promises relating to Zion and Jerusalem now refer in an allegorical sense to Christianity and the Christian Church.” According to  Rabbi Soloveitchik  these doctrines “were all publicly shown to be false, baseless contentions by the establishment of the State of Israel.” (Kol Dodi Dofek, Joseph B. Soloveitchik, translated by David Z. Gordon, 2006). Theologically and politically speaking, the State of Israel enabled Jews to “lift their heads” again.

Ask yourself “who made you?”

Midrash Tanchuma says that to further mitigate the sin of the Jewish People, G-d asked the Golden Calf this question directly:

“Who made you? The calf answered: The mixed multitude that departed from Egypt with the Israelites.”

Perhaps the point of the Midrash is that we too should be asking ourselves “who made us?” If the answer is that we are man-made by the same people who produce video games and reality shows, then we have no right to be optimistic about life getting any better.

However, if we believe that we were made in the image of G-d, and we are willing to look to G-d as a source of growth and self improvement, then we can be uplifted by the promise that the best is yet to come.