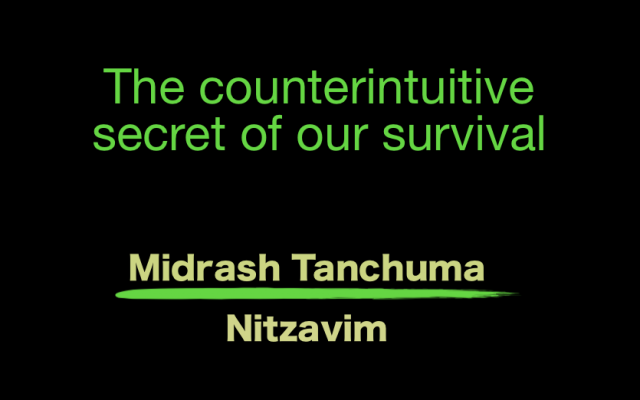 Midrash Tanchuma explores the secret of the Jewish People’s survival, based on the opening words of the Parsha :“You are standing upright today…” (Devarim 29:9).

According to the Midrash, Moshe saw that after the blessings and curses (mentioned in last week’s Parsha), some Jews were demoralized. He therefore explained that it is precisely the difficult chapters in Jewish history that enable us to endure. In fact, how a nation reacts to exceedingly difficult times is fundamental to the survival of the Jewish People and the disappearance of so many ancient civilizations.

The traditional reaction is to rebel against god

According to Moshe, the endurance of the Jewish People comes from the fact that tragedies evoke contrition and prayer – a time of introspection and self improvement. The reaction to adversity of the great world powers of the ancient world was just the opposite. They were not humbled and they did not see the need for repentance. Rather their reaction is summed up by the words  “they kick them”. Which perhaps means they express anger at God and/or they “kick off” (deny) any responsibility for national calamities.

The great exception, which did not last long, was recorded in the Book of Yonah. The great city of Nineveh did repent. Perhaps it is read on Yom Kippur to emphasize that it was the exception that proves the rule. However, a ‘contrite heart’ is generally not an accurate description of ancient civilizations that ruled the world like Babylonia, Greece and Rome.

Moshe summed up this philosophy this way: “Even though you will encounter tumultuous times, they will keep you in good stead.”

This is, of course, reminiscent of the story attributed to Napoleon. When passing through the Jewish ghetto in Paris he heard sounds of crying and wailing coming from a synagogue. He asked his troops to investigate. He was told that the Jews were remembering the destruction of their Temple. “When did it occur?” asked the Emperor. “Some 1700 years ago,” was the answer he received. Whereupon Napoleon stated that any people who remember the past are destined to endure.

Of course, the Midrash goes well beyond remembering the past. What has enabled us to spiritually revive ourselves?  Our ability to accept God’s hand in history and taking responsibility for our exile and all the suffering that we had to experience. This, according to the Midrash, has been the secret of our survival.