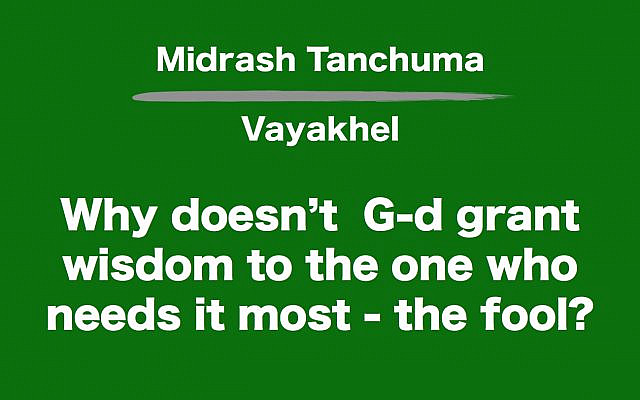 Yet the Midrash tells us that this was indeed the case with Bezalel – the man who was imbued by G-d with the wisdom to design the Mishkan and much of its vessels. As the verse states:

“And I will fill him with the spirit of God, in wisdom, in understanding, and in knowledge of every kind of craft” (Exodus 31:3)

Midrash Tanchuma comments that the particular choice of the word “And I will fill him with” implies Bezalel had these intellectual gifts already. G-d simply added to what was there.

“To teach you that the Holy One, Blessed Be He, does not grant wisdom to anyone unless he already possesses some wisdom.”

Shouldn’t G-d grant wisdom to the one who needs it most – the fool?

The Midrash provides an answer by way of a Roman Noblewoman who was troubled by the same question. She inquired of Rabbi Yosé the son of Halafta based on a verse in the Book of Daniel where it says:

She wondered why the verse didn’t say that G-d gives wisdom to the fool.  Rabbi Yosé the son of Halafta answered her question with a question:

“If two men came to you to borrow money, one of them being poor and the other rich, to whom would you lend the money?” She answered: “I would lend the money to the rich man, of course.” “Why?” he asked. And she replied: “If the rich man should suffer a loss, he would still have sufficient money to repay me, but if the poor man lost my money, how could he possibly repay me?”

Rabbi Yosé told the Noblewoman that she answered her own question. The Midrash implies that just like a poor man might squander the money and then have no way to repay it, a fool would squander wisdom that was given to him and have no innate wisdom of his own to draw from. Furthermore, the Midrash says that he would gravitate to places where other foolish people can be  found and waste his wisdom for self aggrandizement among fools.  The community would not benefit from the wisdom that G-d bestowed upon him. However, a wise person will seek out others with wisdom and spread wisdom in the study halls and houses of prayer.

But how does G-d choose among the wise?

The Midrash hones in on the question of how one person acquires a good name. Perhaps the Midrash is asking the following. Granted, a wise person should be the recipient of wisdom, however, on what basis does G-d choose which wise person to imbue with more wisdom? Which innate quality (besides wisdom) must the wise person possess to start with.

The answer emerges from the sensitivity that Midrash Tanchuma has to the words the Torah uses to introduce Bezalel.   “take note that G-d has called upon Bezalel by name…”(Exodus 35:30).

According to the Midrash, this verse in the Torah reveals two messages about greatness. First, “take note” which signifies that greatness is a quality that emerges – it becomes obvious over time. Secondly, “by name” – which means it’s all about a person’s reputation.

G-d chooses someone who has earned a great name for themselves.

The Midrash defines 3 kinds of “names” people acquire in life:

What single quality contributes to someone having a great name

The Midrash shares the secret of acquiring a good name and acquiring the label of a  a true Torah scholar. Once again, it comes from a sensitivity to the language of the Torah.

“Rabbi Hanina of Sepphoris said that Bezalel made three chests for the ark, two of gold and one of wood. He inserted the wooden chest into one golden one, and then the other golden one into the wooden one. After that he covered the edges with gold in order to fulfill what is written: And he overlaid it with gold within and without (Exodus. 37:2), .. From here we learn that a scholar’s “inside” should be like his “outside”.

What does it mean to have your inside be like your outside?

The phrase is also found in the Talmud in reference to the great Rabban Gamliel who did not allow students to enter the major academy of learning unless  – “their inside was like their outside.” (Berakhot 28a)  It means not to be two-faced or hypocritical. What you know inside – the knowledge and wisdom you acquired – must manifest itself on the outside – be consistent with the way you act.

Although Bezalel constructed the Ark, The Midrash points out that the commandment to make it went out to the entire Jewish community ׃ “and  you (plural) shall make the Ark” (Exodus 25:10). Why was it so important that every Jew felt they had a part in the construction of the Ark? For the Midrash, this goes to the heart of what Judaism is all about.

In the words of Midrash Tanchuma, the reason everyone was instructed to build the Ark is to make sure no one can say to his fellow Jew:

“I contributed more to the building of the ark than you, therefore I am more learned and have a greater right to it than you do. And since you contributed little to the ark, you will have no portion in the Torah.” That is why the Torah is likened to water, as it is said: “Behold everyone that is thirsty, come to drink’ (Isaiah 55:1).”

The Torah was given to the entire Jewish People. Everyone has an equal right to partake.

All joy, no shame

The Midrash makes a further point about the study of Torah that can be observed in study halls (real and virtual) all across the world.

It’s G-d’s way of building upon the wisdom that the giver and receiver already have, and filling them with even more.