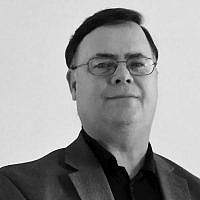 Like many others, I was outraged by the comments by the American evangelical leader Mike Evans concerning the recent Israeli election.[i] In a rambling blog, he seemed to blame Jews for the Holocaust and invoked anti-Semitic tropes in his negative comments about the election. Yet, as disturbed as I was by Evan’s comments, I was also not overly surprised. Within the evangelical world, there is a significant subset who still believe they know a harsh “truth” which they often brandish as a theological weapon against us Jews. What they do not know or seem to understand is that their “truth” is based on the oldest lie in the history of the world. Before I explain this comment, first I need to provide some background information on an important chapter in my own journey, because it is the foundation for what I am about to state. Please bear with me.

Many years ago, when I was working on a lengthy research paper for my Ph.D. program at a Christian seminary, I had an unusual experience that changed my life. Late one night, I was doing research on the development of the early Christian church, and its relationship with the Jewish people in the first century CE. There were some complex issues I was attempting to resolve, and during my research, I kept having an overwhelming sensation that there was something very important that I needed to know about the Jewish people, but my mind could not grasp what it might be.

Eventually, I fell asleep at my desk. When I woke up, my sense of urgency was still there, so I said a little prayer asking G-d for guidance. What did I need to know? After a brief pause, a clear and profound thought came into my mind: “You are Jewish”. I was very surprised by this thought, because I had grown up on a cattle ranch in western Nebraska far away from a Jewish community, and not once in my 30 plus years of life (at that point in time) did anyone in my family ever mention anything about being Jewish.

I initially thought that I must be wrong, but I had to know for sure. The next morning, I called my mother, and I asked her about our ancestry. She recited the various genealogical aspects that I already knew, and she did not mention anything about being Jewish. After she completed her comments, I asked her, “Is there anything else that I need to know?” There was a long pause, and then after taking a deep breath, she said there was. My grandmother on my father’s side was Jewish, but my grandmother had not wanted anyone to know. I did not know what to say, so I just thanked her and quietly hung up the phone.

Over the next couple of years, I finished my Ph.D. program and accepted a position teaching Biblical Studies at a small Christian college. Yet, I could not let go of what I had discovered about my connection to the Jewish people. Therefore, I decided to visit a local synagogue, and I had frequent conversations with a Rabbi who took the time to listen to me and guide me. Also, I enrolled in an introduction to Judaism class. Over time, my sense of connection to my Jewish roots grew stronger, and I felt that I belonged in the Jewish community. But I had an obstacle. What was I going to do about my view of Jesus? I realized that I needed to re-examine what I thought I knew and believed about him before I could go any further in this spiritual journey.

To determine what actually happened during Jesus’ life and after his death, I decided that I could not rely on any secondary sources or translations that had guided my belief up to that point, but rather I had to do primary research on the Gospels. Based on an examination of existing tenets concerning the quest for the historical Jesus and based on my own training in Biblical studies, I developed a set of criteria by which I analyzed every verse in the Gospels. [ii]  I was looking for evidence that would either authenticate a verse’s historicity or demonstrate that it was inauthentic (i.e., not historically reliable). Over a period of five years, I translated the four Gospels into English from the Greek text, and I divided the verses into categories, separating those that were historically valid from those that were not, based on my criteria. After I completed my work, the historical evidence was clear to me. Jesus is not the Messiah. Therefore, I was no longer a Christian nor believed in any of the Christian doctrines. I officially converted to Judaism in 2001, and then I made Aliyah to Israel in 2019, a few months before the pandemic started.

First published in 2004, the main conclusions of my research are as follows: [iii]

1) Jesus was a Jewish teacher who had teachings similar to those of Hillel the Elder, and Jesus also had unique ideas concerning pacifism, the presence of the Kingdom of G-d on earth, and how humans could be good citizens in the kingdom.

2) Jesus never claimed to be divine or the Messiah, and he was disinterested in being elevated. Rather, he viewed himself in terms of a being a servant to others.

3) Jesus was very popular among many Jewish people in his time, who loved him and followed him.

4) There were political forces that were opposed to Jesus, including supporters of the Herodian dynasty and those tasked with pacifying the Romans who were constantly concerned about the rise of indigenous leaders who could cause a revolt in the lands the Romans had conquered.

5) After Jesus was arrested on the charge that he was potentially a leader of a revolt against Rome, he was sentenced to death by Pontius Pilate, the Roman governor of Judea. The historical evidence is overwhelming that Pilate was a vicious butcher who had many Jews killed, and Jesus was just another victim of his sadistic and violent rule.

6) The passages in the Gospels in which the Jewish people supposedly called for Jesus’ death are historically false. It appears that those passages were created to disconnect early Gentile Christians from Jewish people at the time of the Jewish-Roman war (66-70 CE). Christians wanted to evangelize Romans and did not want to have to explain Jesus’ Jewishness. Therefore, they developed one of the biggest lies in the history of the world, namely that Jesus was rejected and sentenced to death by his own people, an idea that eventually led to the burning of synagogues in the fourth century CE by the church, the killing of Jews by the Christian Crusaders in the Middle Ages, Christian pogroms against the Jews in countries throughout European history, and the horrific Holocaust in the 20th century.[iv]

While the conclusions of my research have brought me to a much different place from where I started, it is important to note I still have friends in the Christian world. They have been supportive of my journey, and they are good people, who closely follow Jesus’ main teachings to “love G-d” and to “love your neighbor as yourself”, both of which are found in the Torah.[v] They seek to make the world a better place, and they care for people. To these Christian friends, I have said and continue to say: I wish you well in your faith.

However, to evangelicals who hold a view like that of Mike Evans, I have three things to say. First, we Jews did not kill Jesus, and we are not responsible for his death. Stop trying to gaslight us with that tired old anti-Semitic trope. It is a lie. We have suffered violently at the hands of misguided Christians throughout history, and NOT because we deserve it or did something wrong for which we are paying the price. Instead, we have suffered due to anti-Semitic actions built on the oldest lie. Second, whatever struggles we have as Israelis are our own. As an Israeli, I do not believe we need outsiders telling us how to run our country, particularly those who historically have undermined and hurt us.

In closing, while I believe interfaith cooperation to achieve common goals is very important, I also believe outside entities should NOT overtly influence Israeli politics, particularly when those entities have guiding agendas that are detrimental to the well-being of our nation. Instead of constantly repeating the oldest lie in the world and bullying Israel, Evans and his ilk should abide by the words of the one they say they follow: “Do unto others as you would have them do unto you”.[vi] If Evans and his followers would stop looking for a speck in Israel’s eye and remove the log that is in their own, then they might be able to see and begin to address the enormous socio-cultural problems in America, such as divisive politics, racist attacks on innocent people, frequent mass shootings, and rampant homelessness. I hope and pray they can make this turn, because the people in the USA could really use their help.

[iii] The results of my research are in my book The UnGospel: The Life and Teachings of the Historical Jesus which was first published in 2004. A second edition was published in 2010.

[iv] Two well-written books which go into significant detail on the historical connection between Christianity and Anti-Semitism are William Nicholls’ book Christian Anti-Semitism: A History of Hate and James Carroll’s book Constantine’s Sword.

About the Author
After he earned his Ph.D. in Scripture, Stephen S. Carver taught at a small college in the USA for over 20 years. The classes he taught included: Hebrew Scripture, Biblical Hebrew, Ancient Judaism, Koine Greek, Religious and Philosophical Foundations for Ethical Practice, and Introduction to Peace Studies. He has presented many papers at scholarly conferences and has had two books published. He and his wife made Aliyah in November 2019.
Related Topics
Related Posts
Comments
Advertisement