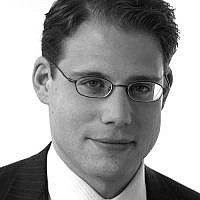 The Blogs
Elie Jacobs
Jacobs is a public affairs consultant based in NYC.
Apply for a Blog
Please note that the posts on The Blogs are contributed by third parties. The opinions, facts and any media content in them are presented solely by the authors, and neither The Times of Israel nor its partners assume any responsibility for them. Please contact us in case of abuse. In case of abuse,
Report this post. 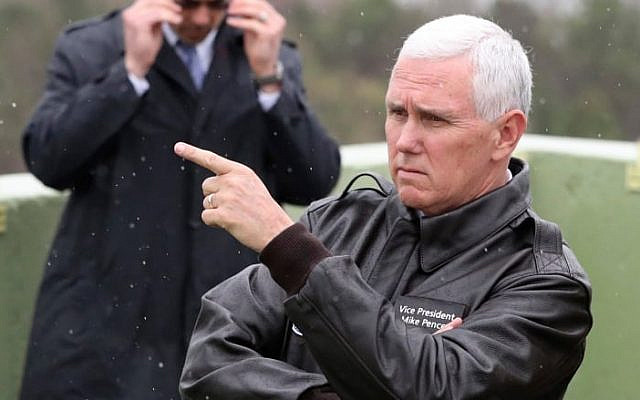 U.S. Vice-President Mike Pence visits the Observation Post Ouellette in the Demilitarized Zone (DMZ), near the North Korean border village of Panmunjom. The DMZ has separated the two Koreas since the Korean War in the 1950s. (Lee Jin-man/Associated Press)

Many self-declared one-issue voters like what President Donald Trump has done vis-a-vis Israel. If you’re one of them, I’ve got an offer you can’t refuse and it’s just two words: Dump Trump. Think about it, wouldn’t it be nice to have an unabashedly pro-Israel American president for whom you wouldn’t have to go through Talmudic-level, logic-defying, mental gymnastics to defend?

While it is likely that President Trump has been violating the emoluments clause of the Constitution since he was sworn in, and while the Mueller Report laid out a pretty solid case for the president’s impeachment, the issues currently under consideration is if Trump abused his power and obstructed Congress. At this point, it is inevitable that Trump will be impeached in the next week and possibly additional times in the next 11 months.

It’s also more than likely that he’ll be reelected in November 2020. However, if you truly support Israel’s long-term well-being, this is not the outcome you should be hoping for. You should want Trump to be convicted by the Senate (however unlikely that is), making Mike Pence the next President of the United States. (double bonus: one-issue voter fan favorite Nikki Haley will undoubtedly play a role in a Pence administration.)

Pence – someone with whom I wholeheartedly disagree with on nearly everything (as one is wont to do with a fascist, Tea-Partying homophobic, soul-selling, choice-denying, wanna-be cartoon hero) – is no one’s definition of an electrifying politician, but no one has ever accused him of not being a supporter of Israel. Given his devout faith, and votes as a member of the House, comments and positions on Israel, he will undoubtedly continue the aspects of Trump’s Israel policy many people support.

In other words, you could support Mike Pence and not have to spend time figuring out how to defend your support of him to your children. Sticking by such a deficient – intellectually, morally, emotionally, constitutionally – person (Trump) when there is an option to upgrade takes a certain level of equivocation no one should be comfortable with.

Donald Trump has no love for Israel. He does not feel it in his “kishkes”. Trump loves Donald Trump – that’s it. Don’t think for a second if he saw an electoral advantage to supporting Moldova he wouldn’t toss Israel aside in one beat of his artery-clogged heart. He feigns love of Israel, because he base demands it and at little cost to any other potential voting bloc, he can cow-tow easily…while still finding time to ignorantly (being generous) toss out anti-Semitic slurs regularly. Trump had been to Israel only once before becoming president. He’s never made significant donations to any pro-Israel organizations and contrary to most successful hoteliers, he never put one of his hotels in Israel. Having Jewish grandchildren doesn’t make you a supporter of Israel. He’s an unreliable ally, who does things – at best – to garner electoral support. At worst, he’s doing irreparable damage to the very concept of bipartisan support for Israel and to Israel’s national security.

Trump is far from the strong man, many supporters thought he was going to be. Declining to retaliate against Iran after the downing of an American drone or after the attack on the Saudi Aramco facility or announcing the drawdown of troops (twice) in Syria, leading people like Dore Gold to compare Israelis to the Kurds, in terms of American support/protection. the theater of war, or ducking the Israeli Prime Minister’s calls to slow down an attempt at reconciliation with Iran should not give supporters of Israel succor. Would Mike Pence be doing any of this? Doubtful.

Think of Pence what you will, but it is hard to deny his avowed dedication to an evangelical belief system, thereby making him a strong supporter of Israel at least in the short/medium term.

In sum, you can get all the Trumpian pro-Israel policies you love with none of the fecal aftertaste of supporting a hateful, embarrassing, childish, mentally declining buffoon. It’s like trading in your unreliable, busted car for newer model you can rely on. The American-Israeli relationship relies on stability and reliability – two things Donald Trump is constitutionally incapable of providing and Mike Pence offers in spades.

So call your senators and ask them to push for a secret ballot in the upcoming senate trial of Donald Trump and vote to convict. Kicking Trump out of office and elevating Mike Pence may be the only way a one-issue voter can demonstrate their support for Israel.

About the Author
Elie Jacobs is a NYC-based public affairs and public relations consultant and a political partner with the Truman National Security Project. He is a co-host of the podcast "Taking Ship". VIEWS EXPRESSED DO NOT REFLECT THE VIEWS OF ANY ORGANIZATION AND ARE SOLELY HIS OWN
Related Topics
Related Posts
Comments