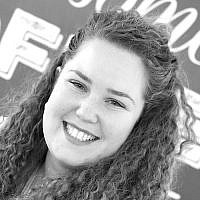 The Blogs
Linor Stein
Apply for a Blog
Advertisement
Please note that the posts on The Blogs are contributed by third parties. The opinions, facts and any media content in them are presented solely by the authors, and neither The Times of Israel nor its partners assume any responsibility for them. Please contact us in case of abuse. In case of abuse,
Report this post.

This past summer, my 69-year-old father came to visit me in the States, for a 3-week father-daughter road trip of the American south. We were sitting at Starbucks in Nashville as we got into a conversation about “these American millennials”, and their relationship with Israel. My father then said, with full confidence (without knowing a single millennial but me, let alone an American one) that these Jewish kids today don’t care about Israel anymore. “They live in a generation that takes Israel for granted” he said with a rough, sabra-like attitude, “maybe they’ll donate money when they’re older, but they have a good life here in America, why would they care about Israel?”

Now, in order to understand this notion, you must understand my father. My father, Tzvika, is the youngest of 3 boys. He was born in 1949, to a newly born, war-ridden nation, in the first Hebrew city of Tel Aviv. Both of his parents escaped Poland right before the war with the assistance of Jewish youth movements and made their journey to Israel to raise proud Jewish Israeli children. My father is a part of the generation that watched this small country grow into the wonder it is today – he’s been a part of all its wars (and even fought in some), he’s seen it through financial crises, political turmoil, 2 intifadas and constant threats of destruction. Being Israeli is the only way he knows to be Jewish – he never goes to synagogue, he doesn’t own a copy of the bible, and he definitely does not keep a Kosher diet…

And yet, his way of being Jewish, of supporting Israel, seems to be the only way he can fathom. To me, growing up with two Israeli-born, rough on the edges, Zionist parents, this was the only way I was taught to be Jewish, to love Israel.

As I began my journey with the Jewish agency and the Hillel movement, we went through trainings and started to learn more about the American Jewish community. In one of our first sessions with Americans at our training, we studied the famous text by Rabbi Yehuda Halevi, “My Heart is in the East.” This poem tells the story of the deep longing to Zion, to Israel, to return to the holy land. For centuries, Jews have been exiled, separated and forced out of their land, and here I am in 2016, in a classroom in America, talking about the exact same idea. I kept wondering if this text is still relevant, if that longing is still there, burning at the hearts of American Jews, guiding them back home. The answer, of course, is not simple. After 2 and half years on this journey, I will use the most worn out term of my work here – “it’s complicated”.

I truly and whole heartedly believe that American Jews (yes Aba, millennials too) care deeply about Israel. But, it is different. They will never experience that thrill, that feeling of a joint cause, that passion to join forces and rebuild a nation. They will never experience Israel as an underdog. They will never get to see their financial contributions planting whole forests in Israel, or building new neighborhoods, or arming a small, struggling military. They live in a reality where Israel is an undeniable fact. They live in a world where a Jewish state is a normal concept. Their Israeli friends aren’t writing them letters from battle fields; they’re snapchatting them from the beach in Tel Aviv, or from the offices of their start up company. We, as Israelis, are different today than those men and women who fought alongside my father to get this country on its feet, and so are the young American Jews I work with on college campuses today. They want different things out of their relationship with Israel, they have different struggles with it, but it is still a core part of their Jewish identity, whether they like it or not.

In my time here, I have seen Jews living an active Jewish life, “without Israel”. Meaning, they avoid dealing with it, or it’s not that interesting to them. Or sometimes they simply just don’t see why they should care about a country that is thousands of miles away from them. If I am being honest, at that first session with Yehuda Halevi’s text, I was wondering the same thing. But, the more I learned about the Jewish community here, and my own Judaism, the more I realized that without Israel, there’s just something missing. When I see my students touch the western wall for the first time on Birthright, something in them lights up. When they are in Israel during Hanukah, they experience for the first time in their lives what it’s like to have a Jewish national holiday. When they see traffic slowing down as Shabbat enters, when they meet 18-year old’s newly enlisted in the army, when they pray for the “people of Israel” while walking the same streets their ancestors used to walk – they feel, for the first time, like they belong.

Israel is not a simple love story. Even the best Rugalach at Shuk Machne Yehuda can’t sweeten the deal on this one. Like any love story, falling in love is the easy part. What comes next is a lot harder. This is when these young American Jews start to ask themselves questions – do our values align? Is my religious practice welcomed here? What if I don’t support the government? What if some of the policies here go against my own politics? And so many other issues that could easily make anyone walk away. But not this generation. We are stubborn. This generation asks questions, they dig deeper, they care. They want to make sure that their relationship is real, based on passion and love. They don’t want to be distant supports of Israel, they want to engage. They travel to Israel often, they participate in programs, they ask difficult questions. And to me, that is what true love and support really is. How do I know? Because I get to be there for their journeys. I’m there to help them find their why. I’m there to help them navigate this love story.

A few weeks ago, Jewish life at Georgetown, where I work as a Jewish Agency Israel Fellow, held its first ever Israel Shabbat. At one point in the service, with a room packed with 70 students, everyone turned to one of the last pages of their Sidur, got up on their feet, and together sang “Hatikva”. Every single student in that room was familiar with the words and melody. I stood in the back of the room, with tears in my eyes, miles away from home but at home nonetheless, and thought back on my conversation with my Dad over the summer. I wish he, and so many other Israelis, were there in that room with me. I wish they could feel the power of peoplehood, of community, of the passion that these students have. We Israelis are very cynical, often hide our feelings, refuse to gush over emotional moments; but even the toughest Israeli I know, my father, would be a sucker for this particular love story…

About the Author
Linor Stein is a 3rd year Jewish Agency Israel Fellow to Hillel. For 2 years Linor served as the Israel Fellow at Boston University Hillel, and now works at Georgetown University and Hillel International's Israel Engagement Group. Linor was born in Ramat Gan, served as an intelligence officer for 6 years, and completed her B.A in Communications and Sociology at the Hebrew University of Jerusalem before embarking on her Shlichut journey.
Related Topics
Related Posts
Comments