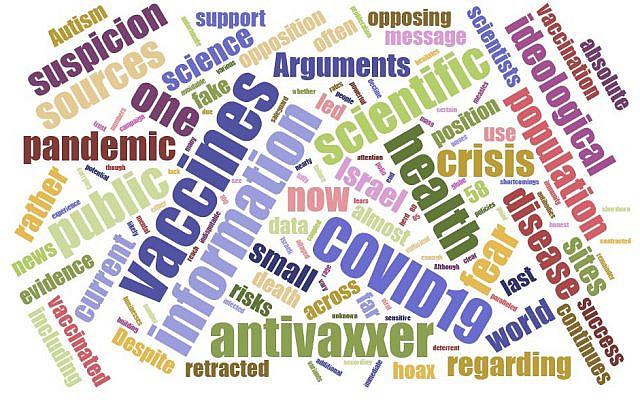 Summary of this post (word cloud created by the author using https://www.jasondavies.com/wordcloud/)

We are almost there. Although the COVID-19 pandemic continues to rage across the globe, in Israel we see the potential end.

Despite the many shortcomings of the Israeli COVID-19 policies – avoidable proliferation of the disease and death, failure to safeguard small businesses, loss of a year of education, or lack of sufficient attention to the mental health crisis that paralleled the viral crisis – we can point to one indisputable success: The mass vaccination campaign, with 58% of the population now vaccinated, led to an absolute and nearly immediate decline in the number of infected.

It is unknown whether 58% vaccinated (coupled with those carrying antibodies due to having contracted the disease) is enough to reach herd immunity. Those numbers vary according to disease, such as 95% for measles and 80% for polio. What is certain, though, is that the more people that vaccinate, the more likely we will not experience additional waves of COVID-19. So, it is unfortunate that there has been a slowdown in the vaccination rates, as the remainder of the population hesitates – either through fear, suspicion, or ideological opposition. 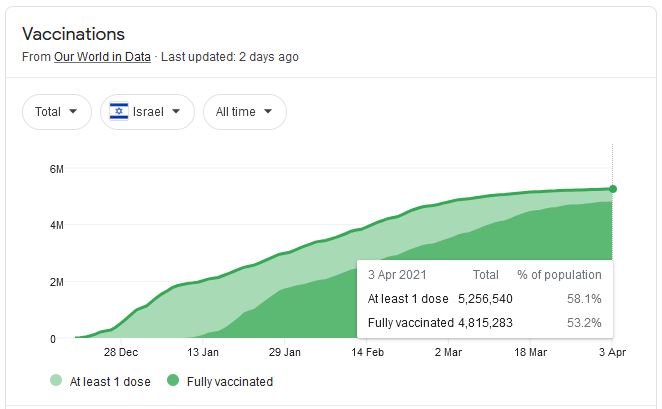 Almost there. While most of the Israeli population has vaccinated, numbers have plateaued. From Our World in Data (https://github.com/owid/covid-19-data/blob/master/public/data/vaccinations/country_data/Israel.csv).

Fear is a powerful deterrent, and both fears and suspicion can be allayed through providing reliable scientific information, by building trust between scientists and the public, and through honest, clear, and sensitive government policy. When any of these are lacking, fear and suspicion grow. Unfortunately, there is a small but vocal segment of the population that has enthusiastically jumped into the void of fear and suspicion to promote their ideological position: Anti-vaxxers, who are serial opponents of vaccines in general, and coronavirus vaccines in particular. Throughout the COVID-19 crisis, they have exploited uncertainty, fear, and distrust by proselytizing their ideological message and fomenting distrust in vaccines and the science that supports them.

The anti-vaxxer message is a profound threat to public health. For this reason, the World Health Organization has designated COVID-19 misinformation as one of the most significant threats to public health last year. In response, the World Health Organization, top scientific journals, think tanks, and government agencies all have dedicated websites for countering COVID-19 misinformation.

The anti-vax message has little to do with science. The effectiveness of vaccines is a scientific question subject to testing and data analysis. While there continue to be scientific unknowns about the current pandemic and the vaccines created to fight it, vaccines have already proven their overwhelming efficacy. A large majority within the scientific and medical communities in Israel and elsewhere support the use of the COVID-19 vaccines, which have gone through rigorous clinical trials and have thus far been shown to be safe, with the risks far smaller than those caused by the disease (some have shown to have negative side affects for a statistically tiny proportion of the population, and these continue to be studied).

The scientific method – the gold standard of current intellectual inquiry – has built-in checks and balances, such as hypothesis testing, replicability, statistical rigor, public scrutiny, and peer review – to generate knowledge and confidence in conclusions. The arguments of the anti-vaxxer, on the other hand, violate the norms of science. The evidence brought to bear against vaccines is a rich mixture of rumor, anecdote, fake news, propaganda, and some actual research that, in proper context, would be scientifically useful.

Anti-vaxxers are, historically and presently, cherry-pickers of information. Rather than looking at the vast of expanse of data and overwhelming historical evidence of success of vaccines, including the COVID-19 vaccines, they select small bits of information and obscure studies that support a pre-determined ideological position of opposing vaccines. One of the most predominant examples is the lionization of a discredited British researcher who suggested that vaccines cause autism (now popularly referred to as the “Lancet MMR Autism Fraud”, or by others as the most damaging medical hoax of the last 100 years). Despite that his work has since been retracted by the journal (a rare and severe event) and his medical license has been revoked, he continues to inspire the anti-vaxxer community, including during the past year. His now retracted study is hailed as proof that there is a cabal of scientists and economic interests colluding to keep this information from the public.

Anti-vaxxers flood the social media with cherry-picked information including random references, quotes, and videos that do not reflect a comprehensive overview of the state of knowledge of vaccines, but rather a confused mishmash of information gathered from myriad directions and creating the oddest of bedfellows. I followed the links of my anti-vaxxer Facebook friends to maverick orthodox rabbis, homeopathic medicine advocates, libertarian organizations, vegan activists, nutrient supplement businessmen, and right-wing misinformation sites. The only thing that ties these disparate sites and sources together is their opposition to the consensus opinions regarding COVID-19 and vaccinations.

Not only are the sources of anti-vax information widely diverse, but so are its arguments opposing vaccines. Arguments start with a denial that we are facing a medical crisis, suggesting (as is now graffitied on bus stops across Israel) that the pandemic is a hoax. Other claims suggest conspiracy, ranging from the feasible (Netanyahu’s use of the pandemic to avoid the political fallout of his legal woes) to the outlandish (Bill Gates is trying implant microchips into the population via vaccinations). Even when some anti-vaxxers accept that the public health crisis is real, they suggest that fresh air and herbal remedies, rather than “Big Pharma” vaccines, are the best cure. And for the most science-oriented among them come the cherry-picked information, mostly anecdotes, regarding supposed health risks from vaccines (regardless that each of the current vaccines has a different mechanism of operation – they are all, in the eyes of the anti-vaxxer, equally suspect).

In order to systematically discount all legitimate sources of information regarding COVID, one must adopt the conspiratorial world view that each of them is misguided, misinformed, or lying. It is not surprising that if we follow the sources of anti-vaxxers, they often lead to known conspiracy or fake news websites in North America and Europe (one of the posts of my Facebook friend, who is otherwise a progressive liberal, led to me this conspiracy-oriented site). The political right, along with former President Trump and Russian and Chinese disinformation campaigns have been identified as prominent sources of COVID-19 misinformation, which is often scooped up and amplified by anti-vaxxer sites.

It is crucial for public health and for scientific progress to recognize the nature of anti-vaxxer rhetoric. While free speech is sacrosanct and scientific knowledge is almost never absolute (that is a beauty of science), false information is dangerous – and in the case of anti-vaxxers, it can lead to sickness and death. Our scientific knowledge has provided our ability to weather this pandemic storm with relatively few casualties. Distrust in that knowledge will only serve the coronavirus and future threats.