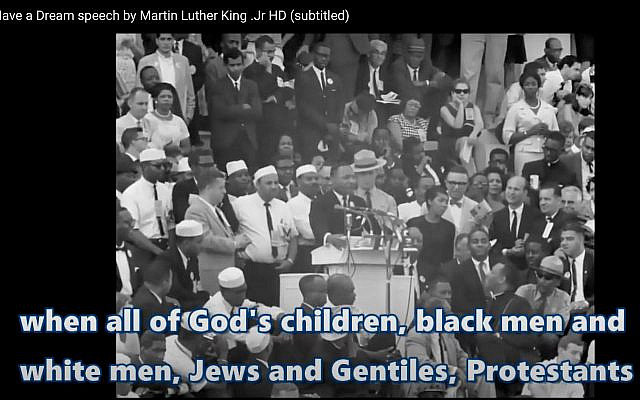 I heard Al Sharpton during his Minneapolis speech paying tribute to George Floyd.  Sharpton said he is organizing a march to mark the 57th Anniversary of Martin Luther King’s “I Have A Dream” speech.

Excerpt from Martin Luther King’s “I Have A Dream Speech”

Comparing what King said with Sharpton’s Minneapolis speech and many of Sharpton’s past actions  should be very worrying to the US Jewish population. In fact, it’s what Sharpton did not say in his Minneapolis eulogy that should put every Jew on alert.

And because Sharpton is a regular contributor to MSNBC, it is even more disturbing he is given a national platform considering his past history regarding our people and Israel.

The Most Disturbing Part Of Sharpton’s Minneapolis Eulogy- 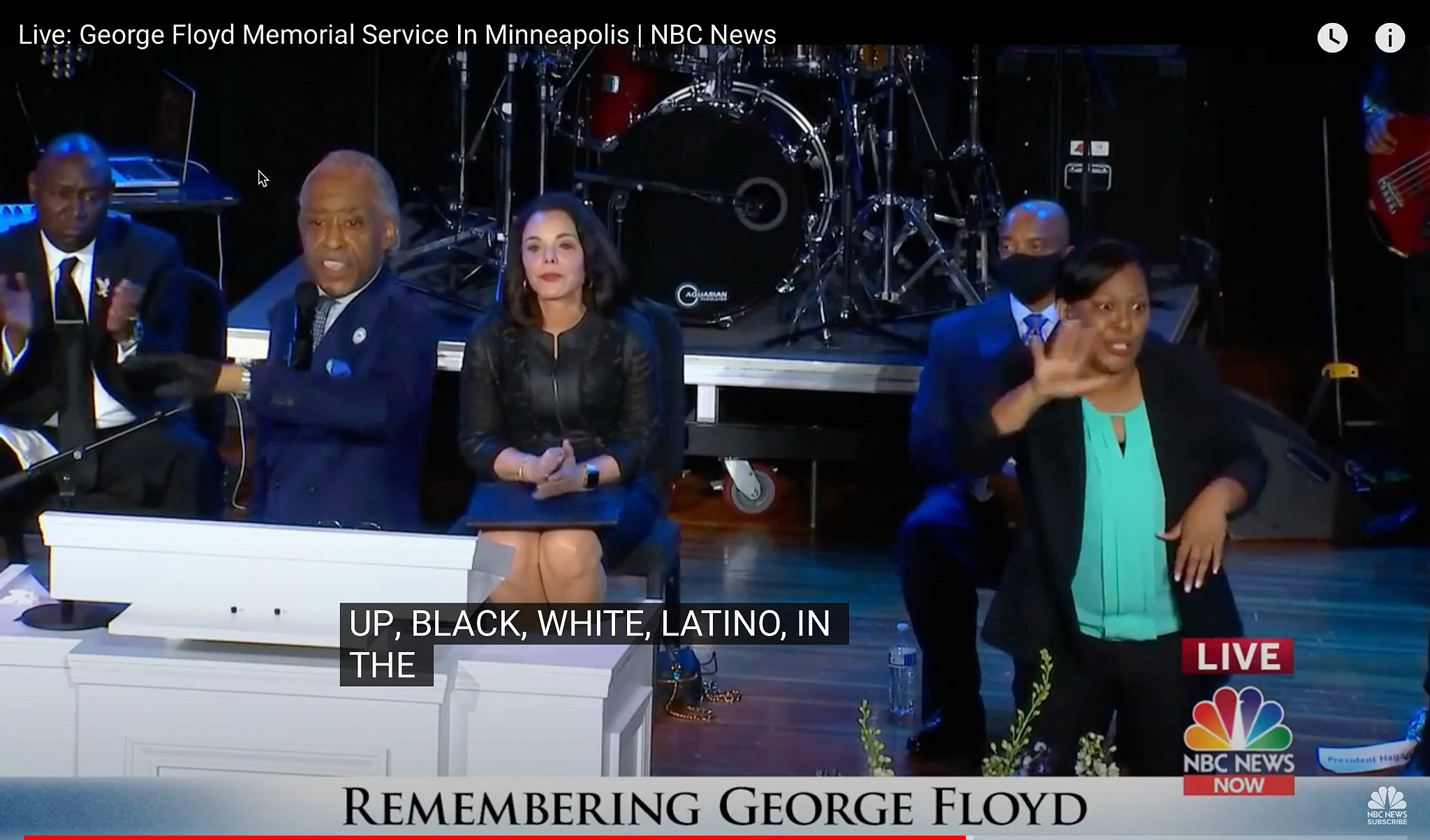 At the George Floyd Minneapolis eulogy, Al Sharpton announces that a march on Washington will take place on August 28 to commemorate the 57th Anniversary of Martin Luther King’s “I Have A Dream” Speech (Screenshot/Youtube)

The portion I am referring to appears at the 1hr 29min mark of the NBC video I was able to capture in a screen grab shortly after his speech finished. But I have not been able to locate it recently via a Google search. So either NBC has deleted it or it is temporarily unavailable. During his speech he said-

“We need to go back to Washington and stand up — Black, White, Latino, Arab — in the shadows of Lincoln and tell them, ‘This is the time to stop this.'”

There is a running written word for word display of his speech at the bottom of the monitor, and the words “Blacks, Whites, Latinos” appear but not the word Arab. I ran other videos of the same speech and Sharpton definitely said the word “Arab”.

Sharpton did not mention Jews. NBC did not include the word Arab on its word for word display. Was that intentional or not?  Is Sharpton sending a message that Jews are not invited to his march?

It was not a problem for Martin Luther King to mention the word “Jews” during that famous speech, why was it missing from Al Sharpton’s Minneapolis eulogy to George Floyd?

Al Sharpton -Looking Back In Time

The Crown Heights race riot took place from August 19 to 21, 1991, in the Crown Heights section of Brooklyn, New York City. Black residents turned against Orthodox Jewish Chabad residents, resulting in a deterioration of already tense racial relations in the densely populated community. The riots began after Gavin Cato and another child of Guyanese immigrants were accidentally struck by one of the cars driven by Yosef Lifsh in the motorcade of Rebbe Menachem Mendel Schneerson, the leader of Chabad. Gavin Cato died and the second child was severely injured.

About three hours after the riots began, early on the morning of August 20, a group of young black men surrounded Yankel Rosenbaum, a 29-year-old Jewish University of Melbourne student in the United States conducting research for his doctorate. They stabbed him several times in the back and beat him severely, fracturing his skull. Before being taken to the hospital, Rosenbaum identified 16-year-old Lemrick Nelson Jr. as his assailant in a line-up shown to him by the police.[3] Rosenbaum died later that night because the doctor didn’t notice a stab wound in his chest. Nelson was charged with murder as an adult;[23] he was acquitted at trial. Later he was convicted in federal court of violating Rosenbaum’s civil rights and was sentenced to 10 years in prison. Nelson eventually admitted that he had stabbed Rosenbaum.[24][25]

On the third day of the disturbances, Al Sharpton and Sonny Carson led a march through Crown Heights carrying antisemitic signs and burning an Israeli flag.[27][28] Rioters threw bricks and bottles at police; shots were fired at police and police cars were pelted and overturned, including the Police Commissioner’s car.[4][13]

Riots escalated to the extent that over 1,800 police officers, including mounted and motorcycle units, had to be called to stop the attacks on people and property.[4]

By the time the three days of rioting ended, 152 police officers and 38 civilians were injured, 27 vehicles were destroyed, seven stores were looted or burned,[29] and 225 cases of robbery and burglary were committed.[4] At least 129 arrests were made during the riots,[29] including 122 blacks and seven whites.[30][31] Property damage was estimated at one million dollars

Twenty years after the riot, a Manhattan synagogue invited Sharpton to participate in a panel discussion marking the anniversary. Norman Rosenbaum, brother of the murdered Yankel Rosenbaum, was outraged, saying inviting Sharpton to speak was “an absolute disgrace” and that his “vile rhetoric incited the rioting.” He added that Sharpton “did absolutely nothing then to improve black-Jewish relations — and nothing since.”

In a 2019 speech to a Reform Jewish gathering, Sharpton said that he could have “done more to heal rather than harm”. He recalled receiving a call from Coretta Scott King at the time, during which she told him “sometimes you are tempted to speak to the applause of the crowd rather than the heights of the cause, and you will say cheap things to get cheap applause rather than do high things to raise the nation higher”.[52][53]

“We remember Al Sharpton for what he did in 1991. It was in August of that year that he led violent, murderous anti-Semitic rioters on a pogrom in Crown Heights. They terrorized that Jewish community for nearly four days, during which 183 people were injured and the innocent visiting Australian University academic Yankel Rosenbaum — brother to one of us — was murdered in cold blood amid cries of “Kill the Jew! Kill the Jew!”

Anti-Semitism is on the rise, not just in the form of shouts or graffiti but also the murder of Jews. It is thus incomprehensible how the Religious Action Center could have ever made this decision( to invite Sharpton).

Norman Rosenbaum also said that Sharpton has never once demanded all of the mob that attacked and murdered Yankel Rosenbaum be brought to justice.

Before Sharpton returns to Minneapolis to sit in on the trial for the four policemen accused of taking part in the killing of George Floyd, he must also seek justice for the family of Yankel Rosenbaum. Failure to do so clearly illustrates that for Al Sharpton, when it comes to a choice between Jews and Blacks, only Black lives matter.

Shortly after the Crown Heights Riots, a lawsuit was brought to court against Lifsh, who had moved to Israel. It was Al Sharpton who flew to Israel to serve papers on Lifsh. Many newspapers confirmed this report such as The New York Times and Chicago Tribune on September 18, 1991.

When Sharpton arrived at Ben Gurion a few people recognized him and at least one began shouting “Go To H*ll” in response to which Sharpton responded “I’m in H*ll already, I’m in Israel”.

By saying this and many other statements against Jews and Israel in the past, this only helps to confirm that in all probability Sharpton does not want Jews to participate in the upcoming march on Washington he is organizing.

Referring Back To My Previous Blog About Hubert Humphrey

I asked why Sharpton never made reference to Hubert Humphrey in his eulogies for George Floyd. Hubert Humphrey was a strong supporter of the Jewish cause and especially Israel. He made many trips there to help the Jewish people, as a representative of the US Government.

For his efforts, my people have much to thank Hubert Humphrey for when we were under constant Arab attack since the time the Jewish State was established. Frank Cover played the part of Hubert Humphrey in the movie “A Woman Named Golda” who was played by Ingrid Bergman in her final film. This film represents only a small part of what Hubert Humphrey accomplished for Israel. And it clearly shows the respect Prime Minister Golda Meir had for Hubert Humphrey and how much respect Humphrey had for Meir.

Given Al Sharpton’s negative feelings toward Israel and Jews, it’s very obvious why he would not make reference to Hubert Humphrey.

By refusing to recognize Hubert Humphrey, making derogatory remarks about Israel and being involved many times in inciting violence against Jews, Al Sharpton has no interest in supporting the fundamental vision of the Civil Rights movement laid out by Martin Luther King.

Jews and all those who are admirers of MLK , HHH and what they stood for should refuse to participate in this march.