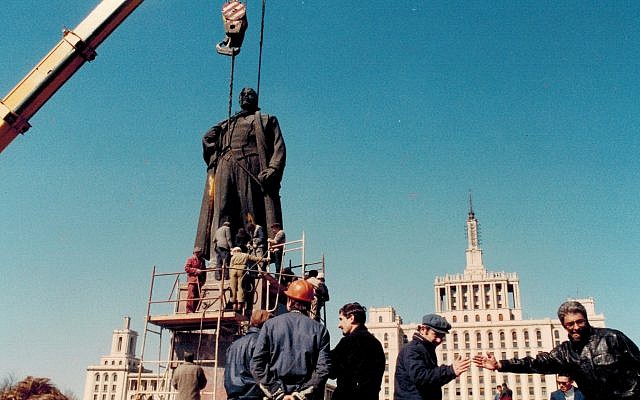 It is a truth held to be self-evident that people caught up in political debate struggle to resist the soundbite that scores points. The phenomenon is on full display these days, with monument conservatives everywhere bemoaning the effort to “erase history.”

You can see where this comes from. When arguing against the removal of, say, statues of U.S Civil War figures who fought to preserve slavery, it is more convivial to cast oneself as defender of intellectual honesty than as a nostalgist of the Confederacy.

Donald Trump figures this may be a winning card in a reelection battle in which he has lost the economy to the pandemic and race-baiting may have backfired. With demonstrators having torn down a series of statues of slaveholders and other offending monuments, Trump has signed an executive order calling for jail time for such acts. And over the weekend a president not known for his in-depth reading showed up at Mount Rushmore, where in the shadow of four predecessors he channeled his inner Josephus Flavius.

“Our nation is witnessing a merciless campaign to wipe out our history, defame our heroes, erase our values and indoctrinate our children,” he said. “Angry mobs are trying to tear down statues of our founders (and) deface our most sacred memorials.”

He may be onto something, electorally. It is a card that may work for Trump in the way that his economic populism worked four years ago in the still-rusting Rust Belt.

Republicans have set up something of a straw man with their feigned fear of a progressive tyranny, but it is certainly true that a vocal (and youthful) minority has coalesced into a rather successful Twitter mob bent on “cancelling” resisters of its orthodoxy and setting ever harsher rules for “appropriateness” that concede little to any yearning to be free.

To the ordinary person, it may therefore actually seem conceivable that the American left is not above “erasing history.” And while it’s reasonable to dismiss anything said by Trump as a cynical connivance, the argument is also popular in more presentable quarters.

Arguing against the removal of statues of colonial-era figures in France, President Emmanuel Macron leaned on the history argument as well: “The Republic will not erase any trace, or any name, from its history,” he said. “It will not take down any statue.”

Among the many who would agree are professors of history who genuinely seek to preserve a record of human events and are understandably wary of revisionism. One of them is Sir Geoff Palmer, a black professor in Scotland, who is concerned about the lessons of black history being swept under the carpet (it seems safe to assume that Palmer’s concerns are not the same as Trump’s, even if his conclusions point in a similar direction).

It is a complex issue that defies clear rights and wrongs. But anyone genuinely wringing their hands over erasing history is missing something very basic about statues and monuments: They are not in fact intended as a record of history, an extension of books; they celebrate a person or a thing.

They bestow an official seal of approval by according a prominence in public space. But prominence need not be permanence.

A new generation may suffice with adding elements to the monument to account for the changing perspectives. But it also has the right to no longer want to celebrate a person or a thing, at all.

But all means keep the history in books, photographs, documentary film and even art, but it’s OK to take down a statue that causes inordinate offense.

When I arrived in Romania just after the anti-communist revolution one of the first events I witnessed was the removal of the Lenin statue from one of Bucharest’s major squares. Unlike the statue of Saddam Hussein, knocked down in Baghdad 13 years later, Lenin actually had a constituency in eastern Europe for a time; but by 1990 it was gone, and no one misses him today.

And, of course, no one wants statues of Hitler on the Alexanderplatz, yet he did once (sort-of) win a Germany parliamentary election. Hitler always serves to clear the mind.

Where to draw the line, one might reasonably ask. Could it extend to the Washington Monument? He was very tall, he could not tell a lie, he was the most paternal of Founding Fathers. But however allegedly uneasily, he did own slaves.

Consider the Romans, who practiced butchery on a scale rarely matched. Have they done enough for us that we might allow the Colosseum to continue to stand?

And what about the patriarchy, perhaps the greatest absurdity yet perpetrated? Will we soon face calls to remove commemorations of all those who played a role in denying women the right to vote until about a century ago, meaning almost every figure in history? Don’t be surprised if we do. It will not be illegitimate, and that’s the vector along which the youth are headed, even though many would consider it outrageous.

There is no equation that can give us the answer. And if we know anything about the progressives today, they certainly possess the capacity to harm their cause with overreach.

So who should decide which monument remains in the black of a collective moral compass? As in democracy itself, the least-bad system may be to gauge majority opinion, perhaps even by the holding of a vote.

That is yet another reason why the coming reality of Israel as a relatively balanced bi-national state that includes the West Bank, an outcome gift-wrapped by Israel’s clueless right wing, is so dysfunctional.

Can anyone imagine a population somewhat equally divided between Jews and Arabs agreeing on whether the monuments (and even naming conventions of bridges) should favor Izzedine al Qassam (who begat a terrorist group) or Rehavam Zeevi (who is closely associated with the idea of encouraging Arabs to leave the Land of Israel)?

To have an even decent chance of navigating the combustible morass of 21st century civilization, a society needs a modicum of agreed narrative at least in the present, if not about the past.