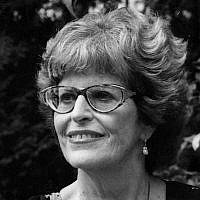 The Blogs
Ada Aharoni
Apply for a Blog
Advertisement
Please note that the posts on The Blogs are contributed by third parties. The opinions, facts and any media content in them are presented solely by the authors, and neither The Times of Israel nor its partners assume any responsibility for them. Please contact us in case of abuse. In case of abuse,
Report this post.

Peace and Freedom should be the right of both the Israelis and the Palestinian people. However, on the side of Hamas, there is a complete denial of the right of Israel to exist; it is clearly stated in the Hamas Charter that its goal is the destruction of Israel.

Toward their goal of annihilating Israel, leaders of Hamas continue to send youths and children to send incendiary -balloons and kites that burn thousands of acres of Israeli fields and woods. Ironically, they call these terrorist actions – “Peace Demonstrations”, and unfortunately, several of the world Media swallow their lies!

If these are peace demonstrations, why don’t we see any Peace signs, posters or slogans, or any speech proclaiming the Palestinian’s will to make peace with Israel, like Egypt and Jordan? All we see and hear are terror proclamations that they will destroy the border and storm their way through the heavy smoke of burning tires, into Israel and straight to El Aksa in Jerusalem.

Of course, Israel has the right and duty to defend itself and the army announced that whoever crosses the Israeli border will be shot.  However, the lives of its youngsters are not important to Hamas and several young Palestinians, among them some children, were killed and wounded. However, some of the world Media continue to falsify the facts and to blame Israel instead of blaming Hamas. Instead of blaming Israel for defending its borders, the world Media should see the following pictures to know the truth, and to cover it accurately and honestly.

Hamas leader Yahya Al Sinwar, clearly declared at the scene of the violent riots, on April 6, 2018, that the aim of all these demonstrations is to erase the borders of Israel! He also made it quite clear that the terror so called “peaceful protests,” will continue after May 15, 2018, “Yom El Nakba”, the Day of the lost Land and the Revenge – until they return to Jerusalem.

What an apt name Hamas leader Sinwar bears,  he indeed is a Sin-War who sins not only against Israel but mainly against his own Palestininian people, keeping them extremely poor and famished, and endangering them with the threat of a new war.  Instead of using the cement, gas and other materials Israel sends to Gaza for re-building the poor Palestinians’ houses, Hamas leaders use the materials for building Terror Tunnels to penetrate into Israel under the homes of peaceful Israeli villagers and farmers.

Sinwar’s hope is that Israel’s borders will be annihilated, and Israel will be destroyed. When this carnage happens, the Hamas leaders will lavishly “pluck out the hearts of the Israelis”, then pray in satisfaction at El Aksa in Jerusalem!

Why is there so much hatred of Israel by Palestinians? The major reason is a misconception that is based in the Hamas Charter, and taught widely in Palestinian schools and even in Kinder gardens, that Israel is an illegal State, which is of course false! The establishment of Israel was voted by a great majority at the United Nations on November 29, 1947.  The UN declared then, that two States will be created: Israel and Palestine, living in peace side by side.  Israel accepted, whereas the Palestinians refused and started a bitter war aided by other Arab countries, against the half million Jews that lived in Israel then, declaring they would throw the Israelis into the sea. However, Israel won and since, the 15th May 1948 is Israel’s Independence Day. This year, in 2018, Israel is celebrating its 70th anniversary. However, the Palestinians are still fighting ruthlessly until today, for a State they could have easily received at the UN on the 30th of November 1947.

There are many other misconceptions that have created deep wounds in the hearts of the Palestinians. A major one is that they feel they are the only ones who are the victims of the Arab-Israeli Conflict, and the only ones who have been uprooted. This of course is completely wrong, as in every war both sides suffer. The Palestinians fled from Israel in 1948, because their Mufti in Jerusalem, told them to flee, and that they would come back soon with the aid of seven Arab countries, to throw the Israelis into the Sea. The fleeing Palestinians from Israel were then 700,000 in number.

However, there was another drastic tragedy taking place in the Arab countries. The Egyptian Foreign Ambassador declared at the United Nations, after the Balfour declaration, that if a Jewish State was created in Palestine, the Arab countries, would throw out all their Jews.  And indeed, almost a million Jews were banished or fled in fear from the Arab countries in which they were born and raised, with only their shirts on their backs. Everything they had was totally confiscated, as from my own family in Cairo, Egypt.

There are almost no Jews left in Arab countries today, except for a small number in Morocco and Tunisia. In Egypt for instance, there were 100.000 Jews living there in 1948, and today there are only 6 very old Jewish widows left in the whole of Egypt! The Jewish Community in Egypt was a very ancient, highly cultured and prosperous one. Since the Prophet Jeremiah arrived in Egypt with his followers, 3000 years ago, there had always been a Jewish community in Egypt, until “THE SECOND EXODUS OF THE JEWS FROM EGYPT,” in the mid twentieth century, and now this prosperous and vital Jewish community has completely vanished. The same happened in most of the Arab countries.

One of the major causes of the current wave of modern anti-Semitism in Europe, is the Palestinian fake propaganda concerning the points made above, that produces the anti-Jewish and anti-Israeli climate. To combat this basic source, the truth must be revealed about the Uprooting of the Jewish communities from Arab countries. The world has only heard about the injustice caused to the Palestinian refugees and almost nothing about the Jewish refugees from Arab countries, mainly from Egypt, Iraq, Syria and Lebanon.

When the Palestinians realize that they are not the only ones who have suffered an uprooting and are victims of the Arab-Israeli Conflict, they tend to become less intransigent and more open to reconciliation. The uprooting of the Jews from Arab countries causes them a Catharsis that brings back their “Honor” which for the Arabs is more important than life.

On the other hand, seeing that their history and narrative is at long last considered, the Jews from Arab countries and their descendants, who are today half of the citizens of Israel – may be more inclined to make concessions for the sake of peace with their Palestinian neighbors.

The continuation of sending incendiary balloons and kites by Hamas over Israel and the burning of tires at the Israeli border with the aim to storm into Israel, is endangering the Palestinians in Gaza with a new war, which they will again lose!

Let us hope the tolerant Arab countries will succeed to convince Hamas leaders that they will have more to gain by making peace with Israel, like Egypt and Jordan, if they annihilate their violent and destructive Charter, instead of trying for the fourth time to destroy Israel! Already at the beginning of the Hamas Charter, the Preamble states: “Israel will rise and will remain erect until Islam eliminates it as it has eliminated its predecessors.”

It is hoped that the Hamas leaders will soon realize that the Palestinian people have suffered enough and that it is high time to give them a chance of peace and freedom, by changing their Charter of destruction and their whole attitude of hatred and violence toward Israel to one of peace. And if not, it is high time that the Palestinian people in Gaza get rid of their incompetent leadership. In this case, Israel too will eventually agree to have a peaceful State of Palestine flourishing by its side. May it be!

About the Author
Professor Ada Aharoni is a writer and sociologist in the field of Conflict Resolution. She has published 33 books to date, that have received numerous prizes. She is the Founding President of IFLAC: International Forum for the Literature and Culture of Peace.
Related Topics
Related Posts
Comments