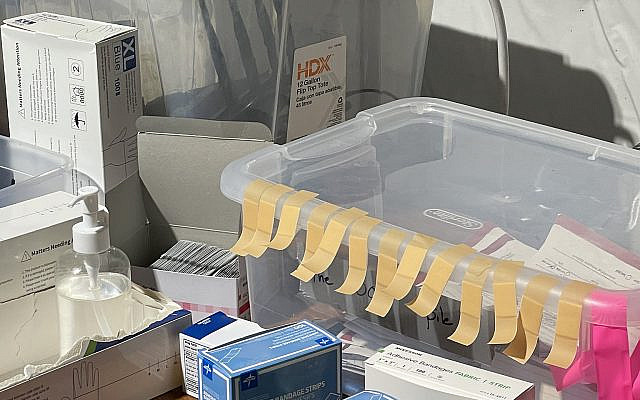 Bandaids at the ready, one every three minutes. Photo courtesy Vicki Cabot.

The nasty weather was perhaps emblematic of the past year, with the shadow of COVID hovering, infecting thousands, taking hundreds more, inflicting pain and suffering on far too many, leaving a cloud of darkness and sorrow over us all.

The rancorous election, the rearing of endemic racism, the protests that devolved into violence, and then the devastating attack on the Capitol, exposed the ugly fault lines of our beloved America.

But the promise of a vaccine to arrest the deadly virus, the promise of new leadership in Washington to heal the country’s rifts, propelled us out the door that dreary night.

We were headed towards State Farm Stadium, volunteers at a vaccination site administering the COVID-19 vaccine. Its potential to protect millions of Americans could provide the safety needed to resume some semblance of the normalcy the virus has diminished over this too long COVID year.

The vaccine roll out has not been easy. Fraught with confusion on eligibility, inefficiencies in scheduling, rumors of insufficient supply, it heightened anxiety, provoked frustration, even anger. But as we realized that night, it was an enormous endeavor that required massive organization and planning. A few glitches should be expected, be patient, we’ll get it right.

As we approached the site, we caught a glimpse of a vast, well lit parking lot; of orderly lines of cars snaking through; of canvas bays set up in neat rows, of helpful volunteers wielding red traffic flares directing the traffic flow.

Almost before we knew it, we were trained and assigned to Lane 3, Howie checking in cars, me providing assistance to the medical personnel. Every three minutes, another car pulled into the bay, questions asked and answered, shots administered, Band-Aids on, then on to the next carload. Adrenaline kicked in.

Young, old, black, white, brown, a multitude of Americans were coming together to protect themselves, their loved ones, and the rest of us. So many driving their elderly parents, helping them through the process, some translating for them. Their care and concern was heartening. Some arrived with little ones fast asleep in the back seat, others with dogs in tow, whether for company or comfort.

Sometimes there was a chance for a quick conversation, to help allay anxiety, “So what are you doing here at 4 am?” was an opener. The driver relaxed, then rolled up his sleeve and got ready for a jab with a needle.

The shift went off without a hitch. Staffers shuttling back and forth to replenish vaccine and other supplies, to fix tech glitches, to offer snacks. It was orderly and efficient, military in execution, yet with appreciation for each and every person who was part of the effort. It was, in a word, what the president had called for in his inaugural address. A show of unity, and we were both awed and humbled to be part of it, even for one night.

At the end of our shift, we returned to our car and were directed to one of those bays to receive our shots, then headed home feeling hopeful, just as the sky shimmered with the promise of a new day.

Even in the darkest times, morning comes.