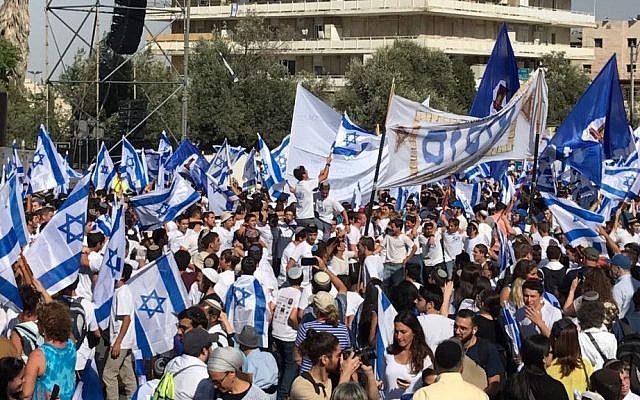 Illustrative. Hundreds of revelers wave Israeli flags as they they prepare to march their way through the city towards the Western Wall for Jerusalem Day. (Like Tress/Times of Israel)

I’ve wanted to write about the Otzma Yehudit (Jewish Power) – Bayit Yehudi (Jewish Home) deal for a while now, but I don’t know what to say. I am struck, over and over, by the verse from the scroll of Lamentations, which mourns Babylon’s expulsion of the Jews from the land of Israel: “About these I weep; my eyes drip water, for a comforter, a restorer of my soul, is far from me — my children are desolate, for the enemy has become strong.”

I don’t mean to sound like a religious fanatic, but to me, this is a religious issue. I believe it is a violation of Judaism to support a party that seeks to oppress people as part of its platform — as Otzma Yehudit does, as reflected in its policy towards Palestinians. So when I see a party that claims to be a representative of Religious-Zionism make a deal with that party, I become upset not as a left-wing humanist, but as a religious Jew. I think if the Religious-Zionist mainstream is ready to make a deal with such a party, we can honestly say that Religious-Zionism has failed — at least, if we assume that the goal of Religious-Zionism is to create some sort of moral state, or to serve as a redemptive (and therefore, by definition: moral) project for the Jewish people.

I’ve never identified as a Religious-Zionist. I have always identified as a religious Jew and a Zionist. For me, the two identities were separate, not hyphenated. My Zionism stems from my belief in each nation’s right to self-determination — which is also the source of my support for the creation of a Palestinian state.* My Judaism, as it relates to my Zionism, is very similar to how my Judaism relates to my American identity: whichever country I live, I must fight for a moral and just society, because to do so is a religious imperative. Unlike many of my compatriots, I did not move to Israel because I believe that the land is holy; I moved because, as a religious Jew, I wanted to contribute to the history of the Jewish people, and believed that moving to Israel was the most effective means of doing so.

I do believe, on some level, that the land is holy. But what does that mean? Certainly not that I have some sort of exclusive right to it. If anything, the holiness is a challenge — to act better, to try to be a person who is worthy of God’s presence, which is especially strong in the Land of Israel. But what does it even mean for the presence of God, a non-corporeal being, to be stronger in one place than in another? Perhaps God’s presence is strongest wherever you find someone who makes a place for God, by acting in a Godly manner — that is, with mercy and kindness.**

But it is precisely because I believe that the land is holy that I am so afraid: In the past incarnations of a Jewish state, we were kicked out by God for acting in an immoral manner.*** The words used in the Bible are that the land of Israel will “vomit out” inhabitants who act improperly, as if there were something in the land itself that cannot stomach unethical behavior.

So in my eyes, as a religious Jew, acting immorally in the name of maintaining control over the land of Israel, actually brings us one step closer to being kicked out of Israel.

With the Bayit Yehudi – Otzma Yehudit deal, I feel we’ve grown one step closer to the “failed attempt at a Jewish state” option. The fact that the harbinger of this step should be Religious-Zionism grieves me, as a religious Jew. Even if Bayit Yehudi does get more Knesset seats because of this deal, it still shows that the Religious-Zionist movement has failed: The movement cannot be trusted, and has nothing meaningful left to say, if it is willing to abandon all principles in pursuit of political power.

So today I am mourning for Religious-Zionism.

*We can have a serious debate about whether or not nation-states are the best way for societies to organize themselves, but given that, due to Western hegemony and cultural imperialism, that is how most of the world chooses to organize itself currently, I think that within that context, each nation has a right to self-determination. I also think singling out Israel for the sin of nationalism when we’re seeing the rise of hyper-nationalist (fascist?) parties across Europe is a bit hypocritical.

*** Even if you want to say that the first expulsion was for idol worship, according to the Talmud, the idol worship was merely a pretence for immorality (giluy arayot and shfichut damim).