The Blogs
Aliza Lavie
Apply for a Blog
Please note that the posts on The Blogs are contributed by third parties. The opinions, facts and any media content in them are presented solely by the authors, and neither The Times of Israel nor its partners assume any responsibility for them. Please contact us in case of abuse. In case of abuse,
Report this post. 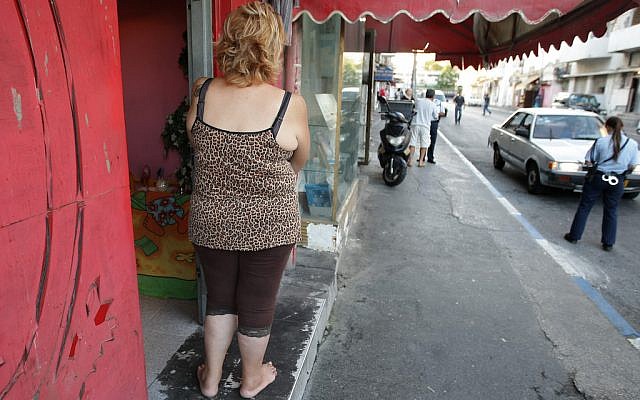 A female prostitute stands outside a brothel in south Tel Aviv, looking at a police woman near by. Sep 21, 2008. Photo by Kobi Gideon / FLASH90.

Last month saw a historic success in the fight against prostitution in Israel: the Knesset gave unanimous preliminary approval for a bill incriminating the clients of prostitution and providing rehabilitation services to survivors of prostitution. It was a bill I submitted along with colleagues from across party lines in the Knesset, which is intended to ensure Israel joins a united front of advanced countries, who have made clear that the sale of women’s bodies as sexual merchandise is unacceptable and carries devastating consequences for women, men, children, and society as a whole.

First of all, this bill proposes a change of perception. For the first time it imposes responsibility on the client, understanding that as long as there are buyers who are willing to pay, there will always be pimps and traffickers who are willing to exploit women to make a profit. Secondly, and even more importantly, it recognizes that women in prostitution, in the vast majority of cases, are victims of terrible circumstances, and it is, therefore, our moral duty as a society to offer assistance and rehabilitation.

The unprecedented support of the Knesset on this bill might give the impression that these assumptions are obvious, and that wider society is acutely aware of the dangers and tragedies of prostitution. The reality, however, is far more complicated. Arriving at this historic moment meant overcoming obstacles and objections, which are likely to increase as the legislative process continues.

Over the past year and a half, I have chaired the Knesset Subcommittee on Combating Trafficking in Women and Prostitution. Of all the issues that I have dealt with, none have sparked such resistance and heated responses as the idea of client incrimination. I have been told that my committee is wasting its time trying to legislate a natural part of human nature, that it is the oldest occupation in human history, and that I’m taking away a woman’s legitimate choice. Others have accused me drafting legislation that is even more dangerous for prostitutes, as criminalization simply forces the industry into a more dangerous underground.

Most of these objections are groundless. However, as the legislation progress still has a long way to go, I believe it is important to address some of the common myths about prostitution, in order to promote a serious discussion before this dramatic move is finalized.

One of the most common objections to prohibition is the belief that prostitution is a product of free choice so we shouldn’t be taking away their freedom of choice. Because two adults engage in an agreement, a visit to the brothel is a legitimate consumer act. According to this logic, prostitution is a victimless crime.

There is no greater lie than this in this debate, and describing the true reality that women and men of the Israeli sex industry face is essential in order gear the conversation away from the theoretical into the practical level.

In the past year, I have visited shelters, brothels and assistance centers, to hear first-hand testimonies from victims and survivors. I have held in-depth committee discussions with non-governmental organizations and professionals. My time getting close to some of the women and girls trapped in prostitution has given me a much clearer view of what prostitution truly is.

It is an industry that captures minors at a terribly young age, without family ties or a safe haven to turn to. According to the National Survey of the Ministry of Welfare and the Ministry of Public Security, about 12 percent of Israeli prostitutes are minors. In most cases, women degenerate into prostitution as a survival option, from backgrounds of domestic violence, rape and childhood sexual abuse. Many testimonies brought to light the vicious cycle of women taking loans and falling into debt on the gray market, falling into prostitution to pay back those loans. It is an industry sustained through violence and exploitation, and in most cases massive drug and narcotic use to blur the pain and suffering. As one progresses in the ‘business’, harder drugs are required, and more money is needed to cover the expenses, leading to more prostitution to feed the habit. This destructive circle erodes the body and soul. In extreme cases, this cycle leads to death, suicides, and murder (in the past decade about 60 women in prostitution have been murdered, committed suicide, died of severe illness or overdose).

Those who insist that engaging in prostitution is a women’s choice are lying to themselves. At best – they are unaware of the destructive consequences of the industry, or worse, consciously deny the consequences because they are part of the cycle that takes advantage of women and girls plight. The scope of the industry is estimated at more than NIS 1 billion per year, so it is not surprising that there are those who still want to keep prostitution around.

Some would argue, and rightfully so, that the reality described here may not reflect 100 percent of the cases, and we must not forbid women who still want to engage in this industry.  But, let’s not forget that a state restricts a person’s freedom of choice to harm himself or others in many other areas – hard drug consumption, drunk driving, different types of gambling or polygamous marriage. This is the role of the state, to reject behavior which causes harm. In this case, the well-being of the vast majority outweighs the limitation placed on a small minority.

Another common objection is that we will drive the industry underground, making the climate more dangerous for the victims. It is argued that Israel should take after the Netherlands and provide social services for prostitutes, as it would remove violence and pimping from the industry.

For those who feel this way, I have some bad news. The industry is already underground, and in large numbers. In fact, regardless the bill, most of the prostitution in recent years takes place in discreet apartments or in the dark corners of the internet. It is run mostly by criminals.

We understand that the eradication of prostitution is not attainable in the short term, but what we seek to achieve is a significant decline in demand (many of the clients are just ordinary people who would not like to be tainted as criminals), and to provide rehabilitation and assistance for women to reintegrate into society. It is interesting to note that since the first vote took place, preliminary reports already indicate that there has been a decrease in the presence of clients in prominent spots in south Tel-Aviv, meaning the deterrent is working.

But more importantly, institutionalization is completely unacceptable, because it poses the sex industry as a legitimate norm. Do we really want our children to grow up thinking that prostitution is normal? Wouldn’t we like to educate them with a healthier perception of sexuality? I hope that in twenty years, our children recognize that the sale of women’s bodies as an unimaginable and reprehensible occurrence of past generations.

The last objection to the bill I would like to address is that trying to eradicate prostitution is futile. As “the oldest profession in the world,” it is inherent in human nature, it has a history stretching back to biblical times, and can never be eliminated. Similar claims were made against attempts to end slavery or to give women the vote. Moreover, in biblical times, murder, slavery, stoning, and casual violence were also present. Should we embrace any ancient norm only because it is deeply rooted in history? Our role is to constantly look forward and shape the future as we would like to see it for our children.

That is the action we are taking. We are improving the lives of thousands of women in Israel, but beyond that, we are working to reshape distorted perceptions about women’s bodies and their status in the world. It’s time to make clear that in the 21st century there is no place for an industry which sells women’s bodies as sexual objects.

About the Author
Aliza is a member of the 20th Knesset as part of the Yesh Atid party. She is currently Chairwoman of the Knesset Subcommittee on Trafficking and Prostitution, as well as a member of the Foreign Affairs and National Security Committee and the Ethics Committee. Before beginning her political career, Aliza was a writer, public speaker and social acitvist. She has taken her passion to the Knesset to work for the people of Israel to create an even better future for this wonderful state.
Related Topics
Related Posts
Comments