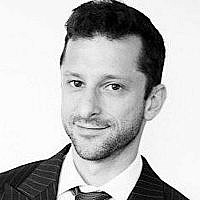 The Blogs
Michael Nahum
Apply for a Blog
Advertisement
Please note that the posts on The Blogs are contributed by third parties. The opinions, facts and any media content in them are presented solely by the authors, and neither The Times of Israel nor its partners assume any responsibility for them. Please contact us in case of abuse. In case of abuse,
Report this post. 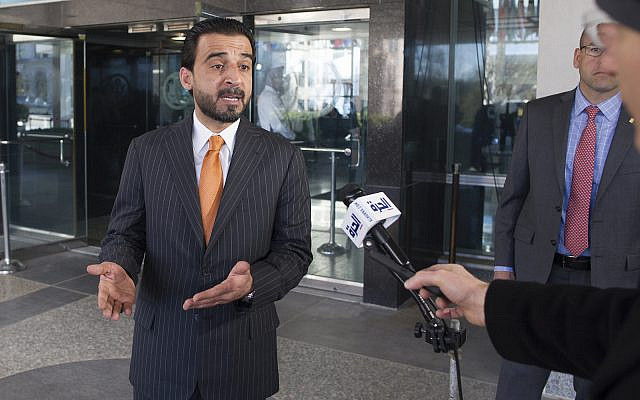 Iraqi Speaker of Parliament Mohammad Halbousi speaks with reporters as he departs the Department of State after meeting with Secretary of State Mike Pompeo, in Washington, March 28, 2019. (AP Photo/Cliff Owen)

Mohamed al-Halbousi, the Speaker of Iraq’s parliament, presents an appealing persona to outside powers. Affable, charismatic, and globalized, he is at ease meeting with world leaders or expounding on the importance of inclusive governance and women’s empowerment. Unlike other cosmopolitan elites in Arab countries, he hasn’t lost the common touch, having overperformed in Iraq’s recent elections. He is, in short, a man with whom the West feels it can do business. Over the past four years, he has held high-level meetings at the White House, State Department, and Department of Defense. He had scheduled a visit to Congress this week, though the visit has been postponed.

Back home in Iraq, the facade of cosmopolitanism falls away. His ascent to the speakership was due largely to an alliance with Moqtada al-Sadr, the former chief of Iran’s largest militia in Iraq who proceeded to form a major parliamentary bloc steered by former death squad organizers. As a Sunni from Anbar province, Halbousi’s enthusiastic support for key elements of the Sadrist agenda lends it a veneer of cross-sectarian support.

The recent “Law Criminalizing Normalization with the Zionist Entity” is a case in point. It prescribes the death penalty or life imprisonment for Iraqis who attempt to forge any contact at all with Israelis. Though the bill itself was proposed by Moqtada al-Sadr and primarily drafted by his bloc and Maliki’s State of Law party, Halbousi played a decisive role in whipping Sunni and tribal votes to ensure its swift passage. Employing demagoguery and antisemitic language, he has far exceeded whatever realpolitik might have justified his involvement with the law, and now wants to export it across the region.

Before the bill was even introduced, Halbousi began making the case for persecuting Iraqis who seek closer ties with Israel by writing them out of the Iraqi consensus. At a town hall held by the pro-Iranian Al-Rafidayn Center for Dialogue on August 31, 2021, Halbousi asserted, “There will never be normalization with that usurping entity. Never! Whether I’m in or out of power. Iraqis will never extend their hands to the Israelis. Never! We differ amongst each other in orientation — some in Iraq are nationalists, others Islamists — but we all agree that Palestine is free and Arab forever.”

This consensus is largely imaginary, however. Survey data indicates that close to 50 percent of the Iraqi public want relations with Israel and its people. More than 750,000 Iraqis follow Israel’s official Arabic platforms on Facebook and Twitter. Last September, 312 civil and tribal leaders assembled in Erbil to call for peace with Israel and its people — not one month after Halbousi confidently asserted that no such Iraqis exist.

Indeed, though the Law Criminalizing Normalization is presented as a natural outgrowth of Iraqi consensus, it serves to suppress the many many Iraqi voices who have been actively striving for peace and good relations with Israel. Halbousi, far from a bellwether politician reacting to an organic outburst of populist rage, has worked assiduously to stoke that rage and enshrine it into Iraqi law. Days after the pro-Israel conference in Erbil last September, Halbousi sought to make an example of the participants: while the Iraqi judiciary issued arrest warrants for several of them and Iran-backed militias threatened to kill them, Halbousi whipped crowds into a frenzy, vowing, “I’ll cut off their manhood. I hope they hear me say it.”

Western analysts maintaining the antiquated view that Arab public opinion is overwhelmingly anti-Israel tend to dismiss such rhetoric, viewing it as the inevitable consequence of impersonal forces. Implicit in this approach is a severe underestimation of both the agency and sophistication possessed by a political operator of Halbousi’s caliber, and it is belied by the extent to which Halbousi has gone far out of his way to promote the anti-normalization agenda even where there is no domestic political imperative to do so.

A vivid demonstration of this came shortly after the Law Criminalizing Normalization’s passage. Halbousi traveled to Cairo to the Union of Arab parliaments, where he gave a speech chastising the assembled representatives for using the name “Israel” in an official communique, and demanding that the body (then chaired by Bahrain, an Abraham Accords signatory) publicly praise and celebrate Baghdad’s law.

Halbousi has his hands full in Iraq this week after Sunday’s resignation of the Sadrist bloc’s 73 MPs in protest of eight months of government deadlock. Whether Halbousi’s next visit to the West includes a European leg or just the Washington visit he postponed, part of what the meetings will achieve is a demonstration to the region that Israel’s most powerful supporters have acquiesced to his campaign against normalization and the many Arabs who want it. If he faces no political consequences, he’ll be right.

About the Author
Michael Nahum is Chief Operating Officer of the Center for Peace Communications.
Related Topics
Related Posts
Comments