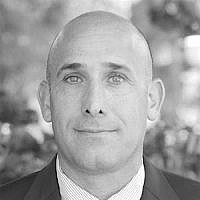 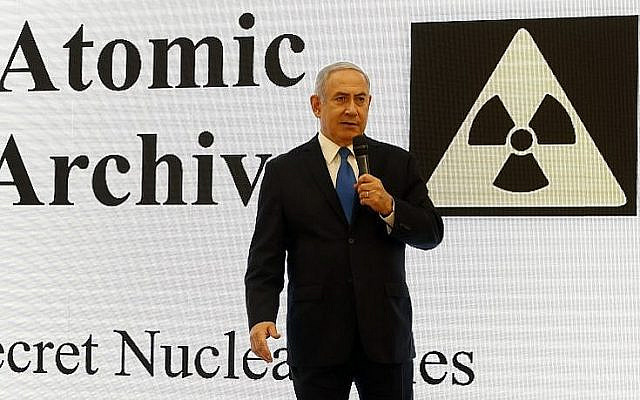 Prime Minister Benjamin Netanyahu gives a speech on files obtained by Israel's Mossad that he says prove Iran lied about its nuclear program, at the Defense Ministry in Tel Aviv, on April 30, 2018. (AFP Photo/Jack Guez)

Given the flurry of critical editorials by leading newspapers around the world condemning the right-wing Israeli government and those who will lead it, even before it has been and as it is being sworn to office, I wish to re-focus attention on the harsh security reality that Israel faces along its borders and from within.

The Persian elephant in the room needs to be acknowledged. So far, diplomacy and sanctions have failed to prevent the Islamic State of Iran from becoming a nuclear threshold state. By most assessments, Iran will obtain enough enriched material to produce nuclear bombs, and it is also in advanced stages of matching bombs with missiles to fire them thousands of miles from Iran’s borders. Israel needs to face that reality or prepare and activate the relevant military measures to negate that. This will be the dominant military threat that Netanyahu’s coalition will have to deal with, and time has nearly run out. The way Israel deals with this specific threat will likely determine how many of the other threats materialize.

Iran’s strategy of encroachment and fight-by-proxy is tightening the virtual noose around many Israeli necks, visible from all our borders in Lebanon, Syria, Gaza, and even in area A of the Palestinian Authority. In this regard, consecutive Israeli governments have failed to prevent the buildup of substantial terror armies at our doorstep, and the time has come to address those threats in a more direct manner.

The most pressing threat is Hamas, which has stockpiled tens of thousands of rockets in Gaza over the last 15 years, and can effectively cover all of populated Israel and bring the country to a standstill. Moreover, Hamas has demonstrated a complete disregard for the humanitarian consequences of waging war with Israel. If Israel really desires to improve the security of its citizens, Hamas has to go — or be denied the weapons to threaten Israelis. Israel has been doing more or less the same thing for the last 15 years, while expecting different outcomes, and that needs to change. A similar threat comes from Lebanon, where Iran-funded and -controlled Hezbollah continues to drive the country into even deeper financial and social despair, but still possesses a massive arsenal of 130,000 rockets, all aimed at Israeli civilians.

Speaking of Israeli civilians, according to various surveys, Israelis were asked about what they perceive as the biggest threat to their security, and a clear majority responded that domestic terrorism and a lack of law and order are the most pressing issues, even more than a nuclear Iran. Criminal links between Palestinian terrorists and Israeli Arabs and Bedouins are deepening, making it harder to distinguish between hostile elements from within Israel and those from the outside. Both Hamas and the Islamic Jihad in Gaza are vying for power over a weak and corrupt Palestinian Authority, led by an ailing Abbas — and anarchy looms just around the corner — which could ignite Judea and Samaria (aka, the West Bank) and start a third Intifada. Israel has no interest in this, but desperately needs to reevaluate its policy regarding the PA. We cannot continue to prop up a hostile entity that spends most of its resources on fighting Israel, whether by financing terror, lawfare, BDS, or undermining it in the media. The PA has proven itself a failure, and Palestinians and Israelis deserve a better option. Of various options, a clan-based system of local governance appears to be the most natural and long-term prospect for stability and prosperity for Palestinians.

Israel will have to choose which threats to focus on immediately, and which to manage or delay. A tough choice. To succeed in safeguarding the Jewish state for generations to come, Israel needs to take bold decisions, but try not to act alone, especially against the Iranian nuclear threat — which is a menace to global stability and not only an Israeli issue. Hamas should not be allowed to continue to terrorize Israelis with their rockets and tunnels, and Hezbollah must be deterred from implementing Iranian dictates against Israel. Both these terror armies have been allowed to fester for too long, with Israelis paying the price.

But most importantly, Israel needs to focus its collective energy on these pressing issues, set aside political differences, and not get carried away with distractions or political whims, while working with like-minded democracies around the world to promote peace and prosperity. War and bloodshed can be avoided if Israel succeeds in building diplomatic and pragmatic bridges, based on the revolutionary Abraham Accords, with additional Arab neighbors and regional powers.

I expect Netanyahu to implement lessons learned from his previous governments, as well as those generated by his predecessors, to dramatically improve Israeli security for generations to come. After all, this is why Israelis elected him and that is what they demand of him.

About the Author
Brigadier-General Amir Avivi (Res.), is the founder and CEO of the Israel Defense and Security Forum, an NGO comprised of over 16,000 members who served in various Israeli security organizations, including dozens of reserve duty generals. The IDSF focuses on national security, education and the strengthening of Zionist values in Israel.
Related Topics
Related Posts
Amir Avivi