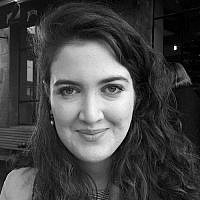 The Blogs
Rivka Hellendall
Apply for a Blog
Advertisement
Please note that the posts on The Blogs are contributed by third parties. The opinions, facts and any media content in them are presented solely by the authors, and neither The Times of Israel nor its partners assume any responsibility for them. Please contact us in case of abuse. In case of abuse,
Report this post.

My last blog post here was over a year ago.

In the meantime, I made Aliyah to Israel during Corona, at the beginning of 2021. It won’t be long before my first aliyahniversary now. I came during a Covid-19 lockdown that was nearly seamlessly followed by an eruption of the Israeli-Palestinian conflict. I have run down from my fifth-floor apartment to seek shelter from airstrikes in less than a minute and a half. I’ve sat huddled on the shelter floor at my absorption center with over one hundred people, all young immigrants like myself. We had all uprooted ourselves from our native soil that winter or not long before and made it to Ulpan Etzion, our first Israeli hothouse. Each of us was a different specimen, yet we had chosen to leave behind our entire ecosystem of family, friends, work, shared childhood memories—everything that makes up a life somewhere. Starting over completely would have been a daunting and disruptive event under the best of circumstances, but we came during the pandemic, a time of unprecedented anxiety around the world. Still, we tried to keep our complaints to a minimum. Optimism is like oxygen for the new immigrant: without it, you will certainly wilt. After all, isn’t optimism what Israel was built on?

Everyone knows Herzl’s famous words: “If you will it, it is no dream.” The State of Israel is in many ways the very testament to the optimism and idealism of the Jewish People. It’s hard to make Aliyah without the images of pioneers in the desert somewhere in the back of your mind. In fact, I saw the same gritty old photos countless times: in books, online, on Birthright. I saw them daily in the Ulpan Etzion lobby. It’s really harder not to know who came before you, and when, and why if you are surrounded by the traces of their hope. I knew that building a life from scratch in a new country, especially a country that still has so much more evolving to do, would be difficult. What I now understand is that, contrary to what Herzl’s statement implied, it is impossible to make it on willpower alone, even if you believe that God is ultimately in charge (and I do).

I have been here through the pandemic, through warfare, and through completely unexpected homelessness. My landlord threw me out from one day to the next a few days before Rosh Hashanah over a failed lease agreement. I had to evict myself from the apartment within less than 24 hours of hearing the news. I couldn’t leave as much as a teacup behind overnight, let alone stay a few days longer without getting charged 400 shekels a day. My landlord knew that I didn’t have the means to pay. As I do not have family here, I needed to rely on friends for emergency help. Thank God, I found a place to stay at my dear friend’s parents. My washing machine and most of my kitchenware stood on their lawn for weeks on end. The handful of suitcases that carried all of my life’s possessions in Israel stood on their balcony, going nowhere.

I am happy to tell you that I made it out of that situation. The next step, still, is to find long-term employment, as none of my applications from the past six months have worked out so far. This has been my situation despite actively looking for a job since before I left Ulpan Etzion. I think of myself as a well-connected and resourceful person. I have an upper-middle class background and a graduate degree, so this experience has been deeply humbling. Part of my narrative is, of course, the fate of so many immigrants. Every developed country has its scores of taxi drivers, caregivers, nannies, and restaurant workers with MBAs, engineering degrees and other university qualifications. My life did not prepare me for this moment because I thought that I deserved more. Part of me can’t shake the belief that I do.

So many Israeli lives have been built on far tougher hardships. My grandmother lived in Tel Aviv in 1949, when new immigrants lived in self-built wooden shacks on the beach. I did not have to build a shack anywhere. Nor did I move my entire family into a tent in a ma’abara, an Israeli absorption camp, as was the case for many Middle Eastern immigrants in the 1950s. But I wish I could tell 21st-century Israelis how hard it is to start over in their native land. Contrary to popular belief, being Jewish and hard-working is just not enough to make it as an immigrant here. I am still figuring out everything else that does.

About the Author
Rivka Hellendall is a freelance journalist from The Netherlands who made Aliyah fresh out of graduate school because it seemed like the right thing to do. Rivka is passionate about words and the power they carry. Her Dutch Ashkenazi heritage allows her to relish the custom of having a dairy dessert only one hour after a meat meal.
Related Topics
Related Posts
Comments