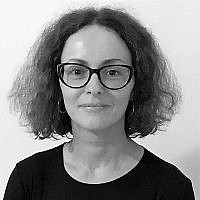 The Blogs
Inna Yoffe Veytsman
Apply for a Blog
Advertisement
Please note that the posts on The Blogs are contributed by third parties. The opinions, facts and any media content in them are presented solely by the authors, and neither The Times of Israel nor its partners assume any responsibility for them. Please contact us in case of abuse. In case of abuse,
Report this post.

My knees were beginning to hurt. I was squatting for long minutes while picking oranges off the ground, as my mom was plucking them off the trees, standing on a ladder. The ones that fell down my job was to pick and put into a box. It was a rare Saturday side job. My mom was offered 50 shekels – about 17 dollars in 1994, for several hours work of plucking oranges and accurately putting them into boxes. It wasn’t her first time, only this time she brought me along. She usually spared me physical efforts such as these. “Your job is to study,” she used to always say.

But maybe thinking I was old enough to do this, I was fifteen at the time, she took me with her. I was thrilled at the invitation, eager to help in any way I could, not prepared for how hard it would be. After a while, I just landed on my knees, feeling significant relief in the joints, but also shame at having succumbed to the pain, and kept working, furtively glancing up at my mother, as if to make sure she saw I was delivering down below. I knew I had to prove myself to my mother, to show I was capable of being like her, strong and enduring. “Are you ok?” she asked me once or twice. Suppressing my growing fatigue, both physical and for some reason also mental, I vigorously replied “sure,” and speedily kept at it.

For her this was an addition to the two jobs she held on most days. She was a house maid during the day, working in several affluent households in the area, and being a hostess for clients, who came to close up deals in an event hall three evenings a week. She would come back at around one or two in the afternoon and leave at six for the night job and come back at midnight. In the hours between, she would have something to bite and at some days would collapse into an afternoon nap. My dad was usually at work too, doing double shifts and weekend shifts that paid 200% in heavy lifting in a cargo terminal of the airport. Skinny and frail looking, with an intellectual aura about him, he was what you could hardly imagine as a heavy lifter, but these were the jobs and these were the circumstances of our new life in Israel. We would do our best, not complaining or regretting, albeit the occasional luxury of shedding tears, my mom and me, each for her own reasons and for our common lot as emigres in a new, hot and strange country.

I remember watching my mother’s breath, in those afternoons and at nights sometimes, her chest ascending and descending rhythmically, her beautiful features relaxed. Exhausted as she was those days, she would occasionally lament her hard lot over a glass of wine: “I will not last till fifty. I might even die soon.” She was in her late thirties back then. “You’ve got to remember everything I told you.” This warning, meant to prepare me for the worst, scared me. Reassured of the steadiness of her breathing, I would either go to bed myself or go back to my homework, or my book. I remember noticing the first strands of grey hair on my father’s curly black shag as he was leaving for a night shift one day, my heart shrinking with love and pity, as I felt acutely then the ruthless passage of time. Seeing his silver curls, I look back at me writing letters to him after I first learned to write in Russian, asking him to play chess with me, sledging off a hill together, drinking hot cocoa and wrestling in bed in the late mornings, tickling each other and comparing muscles. All that was part of our previous life, when there was the luxury of time and emotional resources available and taken for granted.

Aliyah in Hebrew means ascent, or going up to the land of Israel, and specifically to Jerusalem, both geographically and metaphysically. It is used in the context of return of Jews to their historic homeland. But in the everyday reality of immigrant life, rather than being an ascent to a higher, better place, it is, in its initial stages, a descent into darkness. It is a period when you have to discard your past life and start building your future from scratch. It is a time when you have to draw strength from your inner world to face the endless challenges of immigrant life. This experience has taught me how to endure in a unique circumstance, in which your survival kit consists mainly of tools you had acquired before: the ability to work hard, abandon your ego, rely on your childhood memories, your intimate moments with your father and mother, your favorite books and songs. It has bettered my sense of humility and self-reliance. It has been a lesson like no other in what it means to bridge past with present and pave the way into the future.

The adjustment to the new reality of language, mentality, climate and culture has never fully completed for either of us. We have an accent when we speak Hebrew, we don’t entirely understand the workings of the mind of the native Israelis, who uniquely combine a sense of deep fraternity with sometimes unpleasant familiarity and the occasional lack of propriety. Yet, Israel is where we belong not only as Jews, but as free people in a free society. This is my Middle East. Not the Hamsin wind from the desert that leaves your skin and disposition dry and wanting, or the ongoing conflict with our neighbors, but the fresh breeze from the Mediterranean and the taste of its salt on my tongue, and the lump in the throat I struggle to suppress every year, when a rabbi sings a prayer for the ascension of the souls of the fallen. This is my new life, a part of me now, an indelible mark in my psyche akin to the birthmarks on my skin acquired by unwisely spending hours in the ruthless sun during those early years.

Quarter of a century forward, I pick up my children’s toys off the floor, I squat and I kneel as I once did in the orange orchard. Even though I have been tired a lot these past five years since the birth of my twins, I have not once been depleted psychologically the way I was back then. Looking at the journey traveled, I am, at last, content. I watch my kids asleep, breathing steadily, their faces the epitome of dreams I haven’t dared to dream. I am glad to have survived thus far, far enough to enjoy this new stage of life. My mother is nearby, as is my dad, both retired now, helping ceaselessly, rejoicing at the gift of grandchildren. For us, the process of immigration has come to conclusion with the appearance of the new generation. These children are sabras, native Israelis, their souls a concoction of our Russian culture and Israeli values. They will not have to survive and start from scratch like us. As I look at my own strands of white hair, I see the long way I’ve traveled uphill until I have reached the place I can truly call home. I see my own ascent. I feel no pity for myself. I’m grateful.

About the Author
I am an English teacher. I enjoy a good book in English, a good conversation and a strong cup of black tea. I love Israel. I am a wife and a mother of twins.
Related Topics
Related Posts
Comments