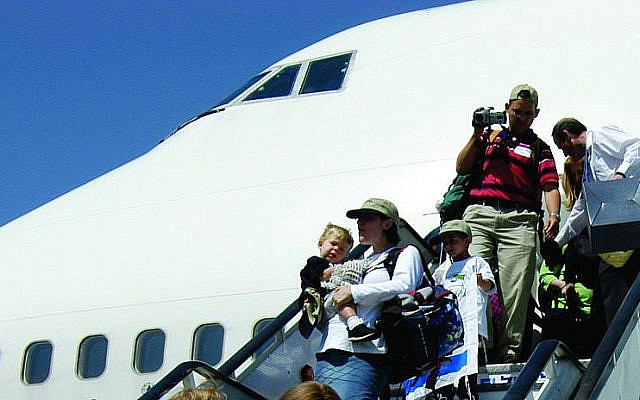 The moment we stepped off the plane. Picture by Nefesh B'Nefesh used with permission.

My Aliyah, and my Aliyah baby, have our tzav rishon today.

I’m not sure we’re ready, but we’re going to have to be.

17 years ago, my Aliyah arrived, cradled in a safe nucleus of fluid, of love.

It was protected, nurtured, safe.

And, over the years, it has learned to walk, to speak Hebrew, to interact with the world at large.

It has learned so very much.

But now, now comes another test of that Aliyah.

The tzav rishon, the first step to enlist in the Israeli army.

And as my Aliyah gets dressed this morning with slightly trembling fingers, and finds its way through the cavernous central bus station to the IDF draft office, it has a nation imprinted on its heart, on its soul.

A nation that one day, really not that long ago if you think of the course of history, was not at bus stations, but at train stations, being forced into cattle cars.

A nation that one day, really not that long ago, was dreaming of a different future; was huddling in refugee centers; was boarding illegal boats and praying to make it to the shores of Palestine; was taking up guns with only a few bullets and hiding behind bushes on a newly formed kibbutz; was building the Land and planting new, tiny trees.

My Aliyah has this nation, these dreams, these realities etched on its heart as it walks into that first appointment with the IDF.

And when the time is right, it will take up arms and learn to defend its people of the past, the present and the future.

But for today, for today, it is just going to that first intake appointment for the Israeli army.

My Aliyah, and my Aliyah baby, merged as one forever in my mind.

As time races, always races, forward to a beautiful future for us both. For me, my Aliyah, and the baby I carried across the ocean to meet his fate at the Israeli army intake appointment