The Blogs
Alan Edelstein
Apply for a Blog
Please note that the posts on The Blogs are contributed by third parties. The opinions, facts and any media content in them are presented solely by the authors, and neither The Times of Israel nor its partners assume any responsibility for them. Please contact us in case of abuse. In case of abuse,
Report this post. 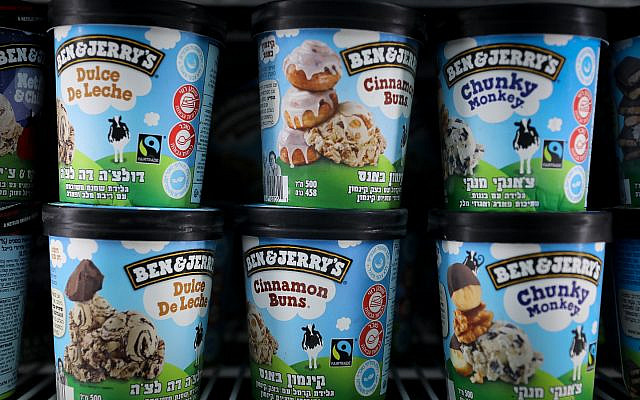 While my arteries may be happy, it pains me to say this: I will be boycotting Ben & Jerry’s and, to the extent I can keep track of their myriad holdings, the ice cream company’s parent company, Unilever. I will be urging others to do the same. (Ben & Jerry’s is a wholly-owned subsidiary of Unilever. In an unusual arrangement, Ben & Jerry’s is run by its own “independent” board.)

Ben & Jerry’s announced that it is boycotting the “Occupied Palestinian Territories.” Its announcement is vague and confusing, which probably reflects the lack of in-depth knowledge and the confusion of those making this ill-advised decision.

Does the announcement apply to every inch of the land beyond the 1949 armistice lines, including Jewish neighborhoods and communities that, until the Obama Administration referred to everything beyond those lines as “settlements,” everyone, including the Palestinian Authority, understood would be included in Israel under any two-state agreement?

Does it include Jerusalem neighborhoods to the north and south of the city center that straddle the “Green Line” and that were established to provide a buffer after travelers on the road into Jerusalem were constantly harassed and bombarded by Jordanian forces when they controlled the hilltops surrounding the narrow corridor pre-1967?

Does it include Gaza, the territory Israel withdrew from in 2005, but which the anti-Israel/pro-boycott choirs now applauding still refer to as “occupied?”

Does it refer to all of eastern Jerusalem, or just the shops and apartments with mezuzahs?

Does it mean that the shops in that part of the Jerusalem neighborhood of Abu Tor that are on the west side of the 1949 armistice lines (which no one recognized as a final border) go on selling Ben & Jerry’s while those on the east side of the line do not? Same question regarding Beit Safafa and Talpiot and a host of other neighborhoods.

If so, watch out for a Saturday night stampede. Funny – I can continue to buy my car tires in Beit Safafa, but not my Ben & Jerry’s sugar rush.

My guess is that no one, including the crowd-pleasers who made this decision, knows the answers. My guess is that they have not thought this out because they know so little about the issue.

The one thing that is clear is that those at Ben & Jerry’s who made the decision probably feel very righteous about joining the “progressive” parade to single out for special treatment the only country in the world with a Jewish majority.

What this will probably wind up being is a very awkward and offensive targeting of predominantly Jewish neighborhoods and communities, and of Jewish shopkeepers, and of Jewish consumers.

I am a long-time supporter of two states. I am under no illusions that the Palestinians have acted in a way that makes them the most deserving of all the people who demand independence, or that such a state will be a Switzerland of the Middle East, a model of democracy living in peace and harmony with its neighbors.

I support two states because including a couple of million more Palestinians in Israel will mean the end of Israel as a Jewish state and/or a democratic state.

And yet I find Ben & Jerry’s decision outrageously offensive, counter-productive, and stupid.

At best, the decision reflects a lack of knowledge about the Israeli-Palestinian dispute and is ill-considered. At worst, it is a manifestation of Jew-hatred, aka anti-Semitism.

The Balfour Declaration stated that the British government looked favorably on the development of a national home for the Jewish people in Palestine. Originally Palestine included the territory that is now Israel, the disputed West Bank, and Jordan. When England was given a mandate over Palestine by the League of Nations it was with the full knowledge that England had issued the Balfour Declaration.

Subsequently the British created Jordan, arbitrarily tearing it off from what was Palestine and giving it to a dictator imported from elsewhere in the Arab world. That dictator’s descendants still control Jordan even though about 70 percent of the population of Jordan is Palestinian.

In 1947, in a painful compromise, those Jews working to create the Jewish state in that area that was left agreed to a compromise: the Jewish state would be a very narrow strip along the Mediterranean Sea, along with the Negev Desert and a part of the Galilee, and another Arab state would be created in what is now the West Bank. (In those days, Jews and Arabs were both called Palestinians, although most in the Arab world considered the West Bank not a Palestinian state but part of southern Syria.)

The Arab world rejected this compromise. In the 1948 war that resulted, Jordan took control of the West Bank. Only Iraq, Pakistan, and the United Kingdom recognized Jordan’s sovereignty over the area. The Arab world did not. Jordan did not allow the creation of a Palestinian state. Very few people advocated for it.

In 1967, Israel fought a defensive war against Jordan, Syria, Egypt, and other Arab nations. As a result of that war Israel took control of the West Bank. Given the history as outlined above, as well as the war, it was entirely reasonable for Israelis to claim control of the area and to develop communities there.

Nevertheless, Israel offered several times to give up much if not all of those territories for the establishment of a Palestinian state in exchange for peace. All of its offers were rejected, sometimes with violence.

In the meantime, Israeli Jews settled in areas of the West Bank. That activity could have been stopped if the Palestinians had agreed to a peace deal. But, in any event, one wonders why Jews living in the area prevents the establishment of a Palestinian state. Arabs live in Israel, Mexicans live in the U.S., Americans live in Canada, Germans live in France, and so on.

Under the Oslo Accords, the final disposition of the territories is to be negotiated between the parties. By boycotting Jews and not non-Jews in the area, which is the likely result of this debacle, Ben & Jerry’s is prejudging the outcome of the negotiations and is clearly taking one side in a territorial dispute. Competently dabbling so deep into international disputes is a stretch even for a company as woke as Ben & Jerry’s.

Ben & Jerry’s action is interestingly selective. Among the countries it does business in are:
Serbia which, to be polite, leans authoritarian. For years it denied independence to Kosovo.
Malaysia, which does not allow Israelis into the country. Jew-hatred is so pervasive that Jewish visitors are warned to hide their religion. Its immediate past prime minister said that Jews “rule the world by proxy” and questioned the number of Jews killed in the Holocaust. He said he was “glad to be labeled anti-Semitic” and he called Jews “hook-nosed.”
The United Arab Emirates, which comes in just behind Russia, Cuba, the Republic of Congo, and Venezuela on the World Population Review’s Democracy Index. (In its defense it, it does come in just ahead of Sudan.)

Ben & Jerry’s happily sells products in these bastions of tolerance while punishing Israel and/or Jews. This is hypocritical and anti-Semitic.

According to the definition of anti-Semitism adopted by the U.S. State Department and the 31 member states of the International Holocaust Remembrance Alliance (IHRA), anti-Semitism includes “Applying double standards by requiring of it [Israel] a behavior not expected or demanded of any other democratic nation.”

In boycotting Israeli/Jewish businesses while continuing to do business within other countries whose actions are unequivocally oppressive and discriminatory, Ben & Jerry’s clearly engages in anti-Semitism or, more bluntly, Jew-hatred.

For historical reasons, a boycott is particularly hurtful and odious to Jews. Among the first acts of hatred, isolation, and demonization used by the Nazis and others who persecuted Jews throughout history was engaging in boycotts of their businesses and depriving them of their right to make livelihoods in their professions. In engaging in a boycott of Jews Ben & Jerry’s is in company with a very nefarious group of historical characters.

Finally, this action runs counter to the efforts of those working for understanding and reconciliation in the region. It aids and abets and gives comfort to those opposed to “normalization.” The road to understanding and to two states will be paved by the Israeli and Palestinian people working together, developing commerce, and engaging with each other.

Efforts like a boycott do not make Israelis more likely to take risks and to make concessions. They reinforce the hardliners.

Actions that support the BDS’ers and those against normalization deceive the Palestinians into thinking that isolation and demonization of Israel will improve their lives, when understanding, state-building, and democratic reform of their own governing bodies is what will give them a better future.

A few years ago, in a similar clueless act of virtue-signaling, Airbnb announced an action similar to Ben & Jerry’s. (Some of my arguments here were taken from my post about that.) Airbnb soon recognized that their action was not smart. Hopefully, Ben & Jerry’s will come to the same conclusion. My arteries will not love it, but the rest of me will be quite happy.

About the Author
Alan Edelstein was a lawyer and lobbyist in California for 30 years. He currently lives in Jerusalem and Sacramento, California and consults on governmental affairs, communications, politics, and business development. He blogs at www.edelsteinrandomthoughts.com. Inquiries regarding speaking engagements: ae@edelsteinstrategies.com
Related Topics
Related Posts
Comments
Advertisement