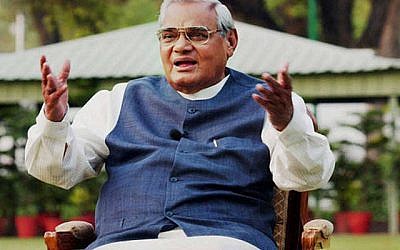 Today, India has suffered a huge loss with the demise of Former Prime Minister Shri Atal Bihari Vajpayee ji. He will be remembered as the harbinger of modernism in a country which was otherwise devoured by the idealist, socialist and traditionalist politico-economic structures. His demise today has saddened the entire country across the political spectrum. Such was his persona that he was loved and respected across all the ideological moorings in our country. His demise is a personal loss to me as he has been an unknown teacher to me since my childhood.

I was less than ten years of age when he assumed the premiership of our country. When he announced the Pokhran tests on the state-sponsored TV channel (Doordarshan), my father was overjoyed by the growing military prowess of our nation which somehow stagnated post-Indira Gandhi ji’s demise. I asked my father the reason for his ecstatic joy and he simply replied, “We are becoming more powerful in the world.” Since childhood, I had a habit of asking questions, so I asked my father, “How are we becoming more powerful?” My father replied, “We are building up new weapons similar to the toy gun that we bought for you.” As the black coloured toy gun made me happy when it was gifted by my father to me, I immediately understood the reason of joy that my father had when he saw the introduction of new guns for our military personnel (which I now realise were nuclear weapons).

Later, in 1999, when India had a brief war with Pakistan at Kargil due to the latter’s intrusion into our territory, I was told by my father that ‘Pakistan’ has betrayed us again and we are going to fight the war with them. I knew the word ‘Pakistan’ and I knew that we had a lot of issues with them since the beginning but the events of the war were not known to me. I told my father, “Are we going to use our new guns against them?” to which my father responded positively. Of course, he said ‘yes’, so as to terminate my future questions altogether. I was happy once again because I liked the toy gun that I had and the idea that our army will get to play with the new guns too. Within a span of few weeks, the TV showed the victory speech of Prime Minister Vajpayee which made my father proud of his country again. He told me that we have won and I assumed that the new guns that we acquired were finally put to use and yielded a positive result in our favour. So I played with my toy gun more vociferously imagining that I am too fighting a war. By the grace of god, the ‘new guns’ of ours were not actually used in the war.

In 2004, the General Elections were held in India and Prime Minister Vajpayee led National Democratic Alliance lost the elections to United Progressive Alliance. There were new faces on TV which I was not familiar with. For me, Vajpayee ji was the only Prime Minister that I knew of. It took a lot of time for me to finally accept the fact that Prime Minister Manmohan Singh has succeeded Prime Minister Vajpayee. In school and playground, many people (especially our social science teacher, yes I remember you madam) were celebrating the defeat of PM Vajpayee ji which made me furious because of all my memories attached with Vajpayee ji. I was also sad because my father was proved wrong that Vajpayee ji will remain the Prime Minister for the rest of his life, which he didn’t say explicitly but I deciphered it out of my conversation with him. With Vajpayee ji’s departure from public life, my introduction to real life dirty politics happened when all of his ideals were destroyed by the subsequent dispensation. In a way, his loss of elections paved the way for a slightly mature ‘me’ who started seeing the reality of politics.

For me, the institution of ‘Prime Minister’ is still equivalent to Shri Atal Bihari Vajpayee ji. He was my Prime Minister when I was unaware of politics. He made me interested into politics when he left public office. I will always cherish all the memories that I have of him since my childhood. I have not seen my grandfather, but for me, he is almost as special to me as a grandfather. Today, I may be happy that he is at a better place now than our nasty world. But, I will miss you Atalji !