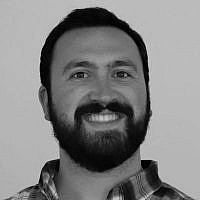 The Blogs
Adam Blue
Apply for a Blog
Advertisement
Please note that the posts on The Blogs are contributed by third parties. The opinions, facts and any media content in them are presented solely by the authors, and neither The Times of Israel nor its partners assume any responsibility for them. Please contact us in case of abuse. In case of abuse,
Report this post. 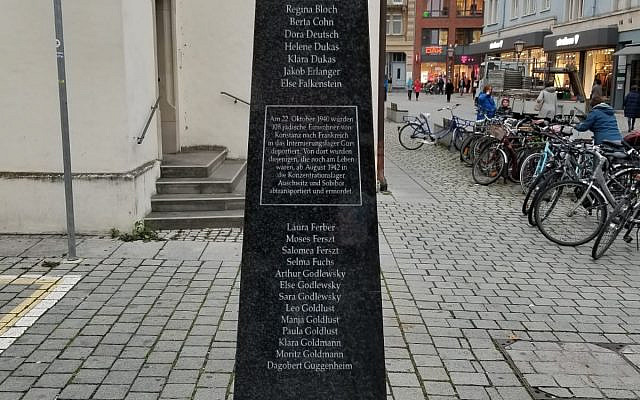 This monument in Konstanz, Germany contains the names of the final Jews who were rounded up and deported from the city on October 22nd, 1940. It stands in the middle of the street outside where the synagogue which was destroyed on Kristallnacht once stood.

This website was developed by the city of Konstanz to commemorate the deportation of the final 112 Jewish individuals from the city on October 22, 1940. The link opens to a gallery of these people. My Bubbe, her brother, and her mother, the Goldlust family, were among those deported and included in this gallery. Unfortunately, there are 61 empty frames with the Hebrew word “חי” (pronounced chai), which means “life.” An ironic, shocking, and, as I’ve been told, intentional choice since these com­munity members clearly did not have surviving relatives to provide actual family photos from the lives that were taken from them by the Nazis during the Holocaust.

In 2018, I joined my father on a meaningful trip back to my Bubbe’s (Yiddish for grandmother) hometown of Konstanz, Germany. It was November, and we were going to commemorate the 80th year since Kristallnacht, the violent Nazi pogrom that broke up my Bubbe’s family and traumatized their community. She had passed away earlier that year and both my father and I knew that we needed to make the trip once the invitation arrived in his email.

While walking around town on our very first day in Konstanz with our dear friend and guide, Petra, we were making small talk. Near the old train station, my birthday came up. “When were you born?” “October 23rd.” “Wow, that was close.” An awkward giggle like I was in on the joke preceded my question, “what do you mean?” Petra then explained that the deportation had occurred on October 22nd, 1940.

It was from that train station on October 22nd that the final 112 Jews living in Konstanz were rounded up and deported to Gurs, a displaced persons camp in France. While my Bubbe and great-uncle were eventually saved, it was from Gurs in 1942 where my great-grandmother, Manja, would be taken to Auschwitz and murdered. There are so many individual tragedies that took place during the Holocaust that it is difficult to say exactly, “when did it start?” Was it Kristallnacht, November 9-10, 1938, when Bernard, my great-grandfather was taken to Dachau? Was it when the family was moved out of their first home into the Jewish part of town, sharing with other families? Or, as the obelisk with 112 names and the date etched in four languages in the middle of town would suggest, is it October 22nd, 1940: the day Konstanz was made Judenrein (free of Jews)?

For the 61 individuals, whose lives have been reduced to a Hebrew word where their portrait should be in memoriam, it really does not matter. The Holocaust was not a beginning, it was an ending.

Still, if October 22nd, 1940 was an ending, 52 years and one day later was a beginning; or more accurately, my beginning. For better or worse, I was raised in a house where, “there is no forgiveness, there is only remembering.” You see, those that can forgive, those that had evil enacted upon them…well they are all gone now (at least in my family). For twenty-six years, my personal, academic, and professional interests led me to engage with Judaism, study History, Jewish Studies, and Philosophy, and while I have found immense joy and love in these fields, there was always the underlying urge to combat antisemitism. Mind you, antisemitism that I never felt personally.

I was raised in a Jewish bubble in the North Shore suburbs of Chicago with the specter of antisemitism that affected my mother growing up in Alabama and the generational trauma of the Holocaust on my father’s side of the family. I was raised on stories of deportations and pogroms, but I fortunately had the privilege that the personal sting of antisemitism was always a step or two removed.

Oddly, this became particularly problematic for me when I began working at StandWithUs as the Midwest High School Coordinator in the summer of 2018. In addition to educating teens about Israel, it is also the mission of StandWithUs to combat antisemitism. Suddenly, I was working with teens across the Midwest who had been excluded from dance teams, made to feel uncomfortable by teachers, had friends make horrible jokes about Jews, and faced a variety of forms of discrimination and harassment solely because they were Jewish. On October 27th, 2018, just a week before I was going to Germany for the 80th commemoration of Kristallnacht where we would speak to German teenagers about the horrors of antisemitism, I broke down and grieved with the rest of the Jewish community as we learned of the Tree of Life massacre in Pittsburgh. At StandWithUs we often say that, “education is the road to peace,” but in the face of grief, anger, rage…education does not really seem to feel relevant. How could I possibly help any of my students when I too was left inconsolable by acts of antisemitism?

There is a scene in the HBO miniseries, The Plot Against America, where a young British woman asks one of the protagonists, Alvin, why he’s Jewish. He responds, “I’m a Jew because I was born a Jew and this whole world wishes I wasn’t. They want us gone; all of us…And they drive themselves crazy because after all this time they still can’t get rid of us…” She takes a moment and replies, “must be hard to be something out of spite.” The scene moves on rather quickly from that point, but it’s a scene that I think about often. Alvin was an angry character. Maybe this was not difficult to recognize, but I felt Alvin’s anger; it mirrored my own. In some ways, I think it helped me articulate an anger that I didn’t previously understand. What young, angry, Jewish kid wouldn’t want to be handed a uniform and head overseas to fight the monsters that hunted his family? Of course I grew up wanting to fight Nazis! Alvin goes on to lose his leg pursuing his violent, angry urge to fight.

Where has fighting Nazis gotten us? According to the ADL’s Audit of Antisemitic Incidents in 2020 (https://www.adl.org/audit2020), there is a troubling pattern of increasing antisemitism throughout the United States specifically over the past decade. Even in a year where global lockdowns shut down society, schools and institutions due to Covid-19, 2020 still reported the third highest antisemitic incidents since report tracking began in 1979. The pandemic even fueled online antisemitic conspiracy theories that might as well have been taken from the Middle Ages.

As I began my work with StandWithUs, I realized that our greatest weapon against antisemitism is not the anger we use to fight, but rather the love, patience, and generosity that we use to educate.

My students over the years have not needed to be handed weapons, they have needed shoulders to cry on and outstretched hands to lift them up. Our network of student leaders often serves as a blanket of support for students who have been made to feel alone, intimidated and attacked by hate and antisemitism in their communities. Their strength is in building their sense of self and in reconnecting with a sense of pride that is frequently undermined by threats and acts of antisemitic violence and vandalism.

Friday, October 22nd, was a difficult day of remembrance, Saturday, I celebrated my birthday with my family, and on Sunday, October 24th I joined my colleague as we educated StandWithUs high school participants of our National Teen Leadership Council about “Antisemitism Today & Confronting Hatred.”

We will remember antisemitism and hatred and where it can lead, but we will not let it define us. We will strengthen one another, and through remembering we will confront trauma and anger and declare that “we are bigger than you.” We will build each other to be upstanders against hatred, and we will educate those around us to be more accepting and loving.

My deepest gratitude to the city of Konstanz and the Initiative “Stolperstein fur Konstanz – Gegen Vergessen und Intoleranz” for their efforts to remember the atrocities enacted against my family and the 109 other individuals deported on October 22nd, 1940. There is no forgiveness for what was done to my family and millions of others. All anyone can do is remember and learn from the past.

I am honored to educate students about this every day.

About the Author
Adam Blue grew up north of Chicago and is the Associate Director of High School Education at StandWithUs.
Related Topics
Related Posts
Comments