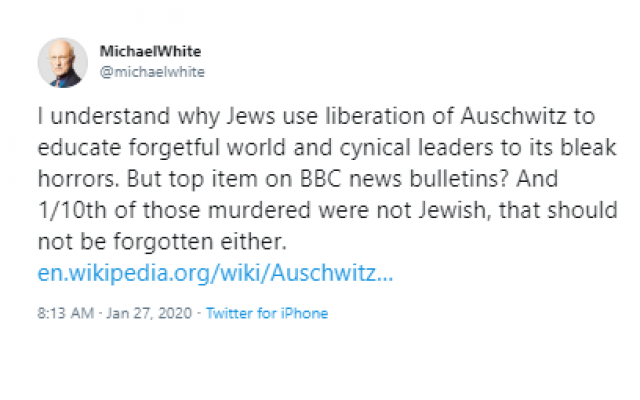 It happens that my warmest coat is a bright red. Belatedly, I discovered it was not a colour to wear at Auschwitz, particularly not on the 75th anniversary of the liberation of that most notorious of death camps. Sombre black was the order of the day for most of Europe’s royalty and heads of state, the grandest of unspoken funerals for the 1.1 million Jews who died at the camp, and whose remains, viscerally and spiritually, will infect the site for ever.

As anyone who has ever been to a concentration camp will confirm, it is a surreal experience. You bring the sensibilities of the 21st century and all its attendant questions of “why didn’t they?” or “how could they?”, questions which will eternally remain unanswered.

Instead. you try, emotionally and physically, to navigate the vast stretches of the camp, its barracks, its museum, and, inevitably, to put yourself in the place of the inmates of Auschwitz. It’s winter and we are all bundled up in hats and scarves and gloves, making it unimaginable to think of the men, women and children, standing for hours in freezing temperatures in thin, striped uniforms, while the Nazis completed their daily bureaucratic roll-call.

None of the people I spoke to documenting Monday’s commemorations believed that they themselves would have survived. And it was plain from story after story from survivors that a huge factor in their survival was luck. Some say that was not luck, but God looking after them. But then, why this person and not that person? That is unknowable.

And perhaps that is the great mystery of the Holocaust, why some lived when millions died.

All around me on Monday morning were TV, radio and print journalists, desperately striving to put their own spin on this unfathomable event. Survivors from the relevant countries were linked with the writers and the broadcasters. Very little original was said, but the air was soon thick with pain and anguish, which made even the most hardened and cynical step back, metaphorically but also sometimes literally.

Years ago, I met a magazine journalist, not Jewish, and certainly never engaged in matters to do with the Holocaust. In fact, she edited a magazine about weddings. But she told me that she and her husband had made a point of visiting Dachau, believing it was important to see it for themselves.

I was naive and surprised at her decision: what connection, I wondered, did she have? It is only now, I think, that I understand what she was doing, and, indeed, what the majority of those present at Auschwitz 75 were doing.

This was the world showing its humanity, its decency, its response to Holocaust denial and revisionism.

On social media this week the once respected journalist Michael White made an inexplicable comment that while he understood “why Jews use the liberation of Auschwitz to educate a forgetful world and cynical leaders to its bleak horrors”, he did not understand why the story should lead BBC News. If you don’t understand that, Michael, and you are ready to make a comment like that on Holocaust Memorial Day, then you understand nothing. For all her fluffy subject matter, the wedding journalist who went to visit Dachau is worth a dozen of you.

I understand why Jews use liberation of Auschwitz to educate forgetful world and cynical leaders to its bleak horrors. But top item on BBC news bulletins? And 1/10th of those murdered were not Jewish, that should not be forgotten either. https://t.co/HVwd44FR9c

But I left Auschwitz with a wish: that the haters, the trolls, and the revisionists, could just once be taken there and hear a survivor speak. Here’s an open challenge to the Michael Whites of this world. It’s not schmaltz, or cliches: it was real people, with real lives, and such hard, unnecessary deaths.

And maybe I have it wrong about my bright red coat. For after Auschwitz, we can only celebrate life.