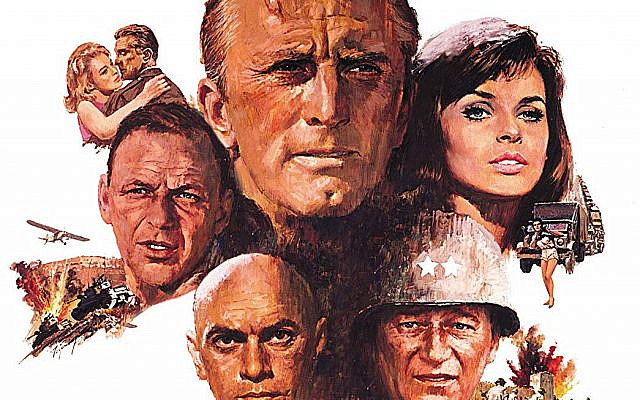 From a promotional poster of the 1966 film based on the life of Colonel Mickey Marcus, starring Kirk Douglas, Senta Berger, Yul Brynner, John Wayne, Frank Sinatra, Angie Dickinson, and select members of the IDF.

In the early summer of 1965, the IDF hired out my company from Paratroop Battalion 890 to the producers of Cast a Giant Shadow, a blockbuster, star-studded Hollywoodization of Israel’s War of Independence. We were to play Palmachniks — members of the pre-state elite fighting force — storming the Tegart fortress at Latrun, which was then held by the Arab Legion and blocked the road to besieged Jerusalem. At the time, two years before the Six-Day War, Latrun was still occupied by Jordan, so this scene couldn’t be shot on location and had to be impersonated by a twin fortress in the south, now known as Metzudat Yoav. In 1948, then known as Iraq Suweidan, it was the scene of equally bitter fighting with the Egyptian Army — but that’s another story.

We pitched a bivouac in a eucalyptus grove behind the fort and were issued costumes. For some reason, the wardrobe managers thought that leather vests were standard issue in the Palmach. Our main objection was not historical verisimilitude but that these garments were unbearably hot. So while film shooting should have been a welcome respite from our training routine, it started off in discontent, and morale only went downhill from there.

On set, we were joined by an American Jewish actor with a distinctively dimpled chin, one Issur Danielovitch Demsky  Thirty years our senior, he seemed somewhat aged to portray our commander. But that didn’t bother us veteran cinema stars. A few months before, we had made our celebrated debut alongside Sophia Loren in Judith, as Syrian commandos attacking her kibbutz in Galilee. There we were pampered with ice cream, unlimited cold drinks and passes to nights on the town in Nahariya. Thus rewarded, we delivered a bravura performance that made the movie a classic (Sophia was also pretty good).

None of those perks materialized in our new engagement, and as honorary members of Actors’ Equity we could not tolerate such violation of union rules. So we declared a strike and refused to take the stage. Our sergeant-major quickly reminded us that, movie stars or not, we were still in the army. He ordered us to roll up our sleeves, get down on all fours and crawl on hands and knees through a field of just-harvested grain stubble to kibbutz Negba and back. If you think that’s fun, try it. This scene was for some reason left on the cutting-room floor.

With the mutiny broken, storming Latrun on our feet under the command of Mr. Demsky was a picnic. We would have captured it too, but in this exceptional case the script accurately replicated history and we were repulsed. Still, our thespian pride overcame righteous indignation and we played so passionately that we were considered (by ourselves, at least) for an Oscar nomination.

Mr. Demsky was also listed in the credits, as Kirk Douglas, for his role as the heroic Col. Mickey Marcus. So I was saddened to hear of his passing at age 103. However others may remember him, for us he was a liberator from torture. RIP.