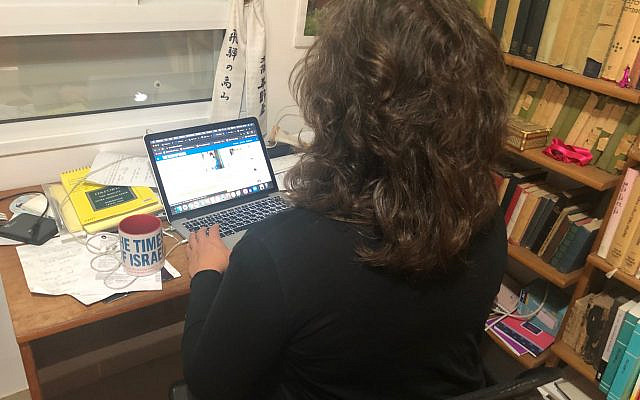 Amanda Borschel-Dan, how her children see her most days. (courtesy)

This weekend, much of the world is celebrating Mother’s Day — but not Israel. Here in Israel, it is celebrated at the end of winter and since the 1990s, is called Family Day as a gesture to honor any constellation of parenting. And that seems right to me — both in how I live my life today, and in how I grew up.

Both my parents were professional musicians — my mom a singer/songwriter and my dad a clarinetist with the Indianapolis Symphony Orchestra, until his recent retirement. In my memory, it was actually my dad who took care of the house and did the cooking and cleaning, as well as the lawn work — until it was deputized to us, his junior staff. My mom was a “free spirit” and my dad was a willing support system for her creative endeavors.

Mom was always working away in her home office at her keyboard writing songs, or scribbling inspiration on slips of paper that we’d find all over the house. She’d occasionally jet off on a tour, sometimes also with my dad, but when home she’d have a routine that included practicing at night. Verdi, Mozart, Berlin, Bernstein, and Copland served as our lullabies. 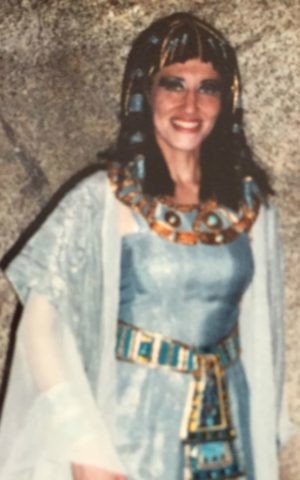 Mom, aka Audrey Leonard Borschel, in the role of the high priestess in a stadium-filling touring production of ‘Aida.’ (courtesy)

My mom was a freelancer and so, ostensibly, should have been somewhat available to her four children. But as soon as we could fend for ourselves, she pushed us to do so. On nights when my dad was working, we often had “Make Your Own” dinners, which led to a run on pasta in the supermarkets.

In many ways, I’ve taken that fend-for-yourself approach as well. And while, yes, I do my share of cleaning — and so much cooking — my husband does as well.

I’ve recently realized, however, that during this coronavirus crisis, perhaps I’ve adopted my mom’s example a bit too well.

We journalists have very much treated the crisis as we would when covering a war zone. All inclusive, from all angles, at all hours; at The Times of Israel, we have been working almost non-stop for months now.

From my at-home office, I’ve found myself swatting away the six children who have come to visit me periodically throughout the days, ask what they can eat, or even just ask for a hug.

The other day, after I shut the computer after another long day, one of my daughters hugged me and I pulled her onto my lap. She said, “I’ve missed you.” I was surprised and said, “But we’ve been together all along.” The 11-year-old said, “Yes, but not like this.”

I’ve been so busy editing articles from all corners of the world that perhaps my own corner was a little neglected. I remember that feeling as a kid, although I’m sure my mom tried her best, too, at the elusive work-life balance.

My mom died six years ago, after a long battle with breast cancer, so I don’t have anyone to call or make a messy breakfast in bed. And since it’s not their holiday, I don’t expect the kids to do it for me.

But this year, I’ve decided to take Sunday off from work (with my boss’s blessing) and concentrate my time on my kids, instead. That will be my Mother’s Day gift — to myself.