The Blogs
Paul Mirbach
(PEM)
Apply for a Blog
Advertisement
Please note that the posts on The Blogs are contributed by third parties. The opinions, facts and any media content in them are presented solely by the authors, and neither The Times of Israel nor its partners assume any responsibility for them. Please contact us in case of abuse. In case of abuse,
Report this post.
I love this country, my country. I fell in love with it when the landscape was harsh and untamed. When the mountains were hard, grey granite and scrubby brush, and the biting wind whipped at our clothing, standing exposed to the elements, with no trees to break its force. I loved facing the challenge, feeling what the pioneers felt; the determination to tame the land and make it inhabitable.

I developed a deep respect for the land when we removed rocks from the field, and how the ground unwillingly gave them up; the rocks, with their rough edges, that tore at the skin of our hands and broke our nails – and the struggle between our backbreaking work to wrest the rocks from the ground, and the ground’s resistance. It was almost like tearing a child from the arms of a mother, and it made me love the land even more. 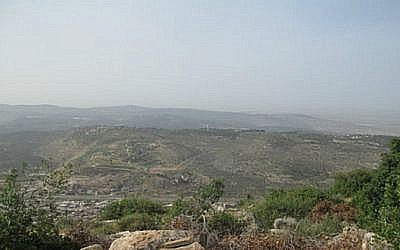 Valley Beit Hakerem landscape, Galil, Israel. Courtesy www.levgalil.co.il
I remember how much I loved the feeling when hiking, that I was treading on paths others had trodden before me, and the thrill of discovery in getting to know the ungroomed wilderness. And when camping on the shores of the Kinneret was like a foray into the wild, when “roughing it” meant roughing it, and it was just us and the quiet lapping of the waves on the shore, and the serenity. We would spread our sleeping bags on the pebble beach and use our hands to flatten the space. And we would lie on our backs and look up at the stars, and feel content. It was a time before the air mattresses and the amenities, and the loud music from car stereos booming all the time. I loved the feeling of being at one with nature, connecting with the land, and when nature was the sovereign.

I remember the depth of affinity I felt when we would pass the mangled trucks that lined the route to Jerusalem (sadly, they’re gone now); I would look at them and marvel at the bravery and determination of the Haganah convoy escorts and felt an elemental brotherhood with them, as the bus slowly climbed the incline as if I was reliving their painfully slow progress. But they had to do it with withering gunfire lashing down on them. It was almost like I expected to see their spirits emerge from the wreckage at any moment and they would welcome me. How inspired I felt while thinking about their selflessness and sacrifice. 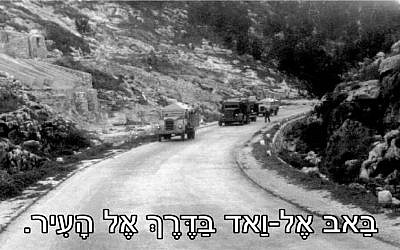 Bab el Wad. Courtesy of Times of Israel.
I remember with nostalgia when life was simple. Where every small luxury we had was precious and appreciated; a hard-earned reward. I remember the sense of satisfaction I felt in the stiffness of my muscles from the work of building my home, and that the most intoxicating and arousing smell was the smell of freshly shampooed hair in the dining room after a long hard day.
I grew to love the intensity of life here. The euphoria of the highs, and the indescribable depths of the lows; it made you feel alive. I remember feeling that in Israel your life doesn’t coast along, but rather you navigate the storms.
There is even a love in grief, and a kinship one feels with people you don’t even know, after a terrorist attack, or during a war. And as painful and wrenching as it is, I don’t think I could live without it. I want to feel that solidarity, that gut feeling that we are all in this together. It makes me feel that I am an integral part of this country I love.
It was easier to love Israel then. I still love this country, but it is getting harder.
It breaks my heart to see how the fabric of our society is being torn apart – how we are being torn apart by a man whose political success thrives on pitting us against each other. What he gains by intensifying the acrimony of our differences, we as a society lose, as our common interests and solidarity are eroded by his obsession for power and the never-ending period of election cycles he has put us through.
It used to be that even though we would disagree on what was best for our country, there was an acceptance that we both wanted the best for Israel -and it WAS our country. Now, if I disagree with you, I should leave. I won’t.
It’s hard to hear people call me a traitor because I object to the settlements, or to be called a supporter of terrorists because I think that human rights are not the right of some but not others, according to your ethnic or national identity.
But I am here and I will fight for what I believe while trying to preserve our unity. Because unity through uniformity is an illusion. True unity comes from diversity and from accepting that diversity as an integral part of our country’s tapestry.
About the Author
Paul Mirbach (PEM), made Aliya from South Africa to kibbutz Tuval in 1982 with a garin of Habonim members. Together they built a new kibbutz, transforming rocks and mud into a green oasis in the Gallilee. Paul still lives on Tuval. He calls it his little corner of Paradise.
Related Topics
Related Posts