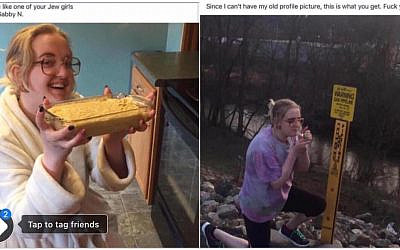 My neighbor’s oldest daughter’s antisemitic Facebook posts about me.

Several years ago, I moved to Minnesota to be close to the Mayo Clinic for health reasons.  I didn’t want to actually live in Rochester because I didn’t want to be reminded all the time I was experiencing serious health issues.  Another reason was that I wanted to be closer to nature since I’m an amateur nature photographer.

A few friends of mine who live in both Wisconsin and Minnesota suggested I move to Lake City, which is a small tourist town along the Mississippi River.  I was apprehensive at first since I never lived that rural, yet after a great amount of consideration I decided to moved there.

At first, everyone seemed extremely friendly.  One of my new neighbors actually baked cookies for me as a welcome to the neighborhood gift.  When I sat outside on my front porch other neighbors stopped by to introduce themselves to me.  I had this warm fuzzy feeling about my new small town.

That wonderful feeling was short lived, lasting only a few weeks.  Everything started changing when one of my appliances broke down in my home.  A repairman came over to fix the issue. A few days later, my next-door neighbor’s youngest teenage daughter came over.  She wanted to let me know she overheard her grandfather and the repairman talking.  The repair man stated he didn’t like Jews, and would do just about anything he could to get me to move out of his town. The only way the repair man would have known I was a Jew, was that he must have seen my menorah in my China cabinet.

Before I knew it, everyone in town knew I was a Jew.  When I went to the local small town grocery store to shop, everyone started calling me the “Jew” and would refer to my service dog as the “Jew Dog”.  I had never been in this sort of situation. I never thought I would need to check to see if other Jews lived in the town I was moving to. I never in my life thought that being a secular Jew would be an issue.

It was at this time I started noticing all of the Trump signs in and around Lake City.  I always knew Donald Trump was racist and an antisemite, yet I didn’t think his hate-filled mind would affect me. My timing moving to Minnesota was way off.  I moved to Lake City right after Donald Trump became president. Until I started to be the target of hate, I just wasn’t paying attention to all the Trump signs that were posted.

The neighbor who brought me cookies remained my friend. She was a good Christian woman.  Once learning I was Jewish she told me I was the first Jewish person she ever met, and asked if she could ask me questions about Judaism. I did my best to answer them.

I’ll never forget the first time I was invited to her home for dinner with her family.  She asked me to lead a prayer before we ate. After living in the Orthodox world for a decade, I proceeded to say the bracha in Hebrew. I wasn’t thinking about where I was.  I was on automatic pilot, without thinking my mind just thought prayer before eating.  Everyone at the dinner table just stared at me like I was from another world, and politely proceeded to ask me to explain what I said.

I really don’t speak Hebrew, so I was shocked that’s what came out of my mouth, especially since it had been a few years since I lived within the eruv of Baltimore. I did my best to translate the bracha.  It’s kind of funny looking back, that first meal I had with my neighbors family was the one and only time when  I was invited to say a blessing over the meal. I still laugh at that awkward moment.

As the weeks progressed, things got more difficult for me living in Lake City.  My next-door neighbor had two teenage daughters. The oldest daughter spent time at a juvenile detention center. The younger daughter was a real sweetheart. As time went on she disclosed to me that she was afraid of her older sister’s violent outbursts. I did not have a close relationship with her mother, and didn’t feel comfortable discussing the issue her daughter brought up to me with her.  At the time the younger teenager let me know she was in therapy and was seeing her therapist later that day.   I encouraged her to tell her therapist about the situation. Once she disclosed the abuse to her therapist a family therapy session occurred, and the older sister who was 19 was required to move out.

This was small-town America and I was being targeted with domestic terrorism. My fear was growing daily.  It was around this time that a swastika was spray painted on my garbage can.  Soon after that I was made aware that the police department was very small, and everyone in this small town was related to each other. As time progressed, I was told that the older daughter of my next-door neighbor was responsible for the garbage can. The police response was “kids will be kids”.  Nothing was done.

About a month or two later the younger daughter of my next-door neighbor, notified me of an image on Facebook that was meant for me that was posted by her older sister. The image was of her sister smiling, putting a cake in the oven with caption “Bake me like one of your Jew girls”.

Facebook removed the image, and then the older teen posted a new image of her kneeling at a gas pipeline with a burning cigarette that said “Since I can’t have my old profile picture, this is what you get. Fuck you”.

I immediately called the police, and emailed them the pictures as they requested. Once again the police officer responded: “kids will be kids”. He refused to take an official police report.  It was at that time I started calling every agency and organization I could think of looking for help.

Not one Jewish organization would get involved. All they did was document my statement, had me email them the images, and thanked me for the information for their statistics.

I asked for real help, yet was told they didn’t get involved in situations like mine. They suggested I call the two Jewish Federations in Minnesota. One was located in  Minneapolis and the other in Saint Paul.  When I called I was told that I lived outside their catchment area, so they were unable to get involved or offer assistance.

Because I worked in the anti-rape world for decades, I figured it wouldn’t hurt to call a local rape crisis center for assistance.  Even though this had nothing to with a sex crime they referred me to a local law clinic. The two agencies attempted to assist me. It was at that time I was informed I lived in Klan territory (Ku Klux Klan).

At one point the rape crisis center was attempting to help me to get a protective order. Sadly, I was informed the judge whose courtroom my case was assigned was known to be a klansman. Since there was no way to switch to a different court room, the decision was made not to proceed in that direction.

It was at that time my attorney suggested that it was in my best interest and for my safety I needed to move.  I had already came this conclusion, yet it took time to make the arrangements.

The tensions were building.  A man who lived a few blocks away from me whom I had never met before saw me walking my dog.  He came up to me and said: “We don’t like Jews or Jew dogs in this town, and we know how to take care of things”. I immediately notified the rape crisis center and my attorney to document, since law enforcement in Lake City was unwilling to protect me.

One of the ways I was dealing with stress caused by this experience was to drive down country roads taking pictures of what I saw.  It was my way of refocusing my mind with my camera’s lens.

There was this one day before I moved I was driving around. I turned around a bend, when I spotted a few pickup trucks with young adults drinking beer, waving Nazi flags.  The road was to narrow to turn around, so I had no choice but to kept on going.

One of the Nazi flag waving teens was my next door neighbor’s oldest teenage daughter.  The young woman was to busy drinking and talking with her Aryan friends to notice me driving by.  I have no idea what would have occurred if she saw me.  I moved out of Lake City the next week.

As much as I want to forget this chapter in my life, it will be forever implanted in my mind.  The experience changed me, and made me more determined to fight hate in every form.

About the Author
Vicki Polin is a feminist who has been a Social Justice Activist since her childhood. Vicki is also an award winning, retired psychotherapist who worked in the anti-rape field for just under forty years. For fun Vicki is an artist and nature photographer.
Related Topics
Related Posts