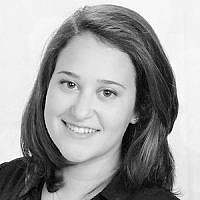 The Blogs
Avital Silver
Apply for a Blog
Advertisement
Please note that the posts on The Blogs are contributed by third parties. The opinions, facts and any media content in them are presented solely by the authors, and neither The Times of Israel nor its partners assume any responsibility for them. Please contact us in case of abuse. In case of abuse,
Report this post.

Today is a day that instills in me fear. But it also gives me hope.

Growing up, my parents reminded me and my siblings that life in America may seem good for now, but we must always be careful. The Jews in Germany felt safe from their government, and when they started being persecuted, many just stuck it out, hoping their government would protect them. Others had a better idea of what was to come and fled to America. My great-grandparents were two of those people.

America was the beacon of hope for many people- just getting to America would make them safe. Numerous people showed up on the shores with no money and no relatives and managed to create good lives for themselves. To many, there is no way America could be anything but safe for the Jewish people. They were saved there, raised families there, and can’t imagine their lives anywhere else. I grew up in a safe America, and I pray to God that nothing changes, but there is no guarantee. German Jews felt the same way about Germany, and we can look back and see what happened there.

That is my greatest fear. That American Jews will start feeling the way the German Jews felt in Germany, and end up with the same ending as the Jews in Germany. God Forbid.

But my hope comes right along with it.

I stood this morning, with every other person in the State of Israel, for two minutes in total silence. The men doing construction put down their tools. The taxis on the road pulled to the side. Classes were halted. Everyone stood and stopped. The siren pushed its way into our heads, and as loud as it was, the way I would describe the scene was silence. Every single person understood the magnitude of what today is.

Six million Jews died in the Holocaust. People give the statistics about how many Jews would be here right now if the massacre didn’t happen. It’s a hard number to wrap my head around; I can’t possibly imagine anything so large. Last year, eight hundred thousand people showed up for Rav Ovadia Yosef’s funeral. That was the largest gathering of Jews in one place that has ever happened in Israel. That number was about 13.34% of the number of Jews that were killed.

My hope is because of Israel. It is a place that as long as Jews control, will always be safe for us. Yes, I know about stabbings and kidnappings and all of the horrible terror attacks that happen here. It breaks my heart that there was an alleged attack last week that ended with one casualty and someone in severe condition. But in this state, you can see just how much one person means. The entire country tore itself out for the untimely death of three young men. We all feel pain for any number of people that are lost. Each person means something here. Everyone is family.

Those attacks are a scary reality here. But what is scarier is a government sanctioned attack on its own people, and that is something that cannot happen when we are our own government. This summer showed that the opposite was true. Our country went to war after the three young men were kidnapped. We fight for every single person.

As I see it, Jews and Israel go together and are strengthened by each other. You can be a Jew out of Israel, or a non-religious Israeli, but the best way to be either is to be both.

Today is a hard day, and next week we will have Yom Hazicharon, another hard day of remembrance and mourning. But we will then switch over to celebration for Yom Haatzmaut, because that is who we are as a people. We take our hard times and push them into good ones, to make a better future for ourselves. We remember and mourn the ones we lost and use them to motivate ourselves to becoming stronger, and powerful enough to stop ourselves from getting hurt again.

About the Author
Avital Silver moved to Givat Shmuel from Teaneck, NJ, and is studying at Bar Ilan University. Living the dream... sort of. Future is unclear, but the prospects look good: psychologist? entrepreneur? short order cook? underwater basket weaver? If anyone has any better ideas, feel free to send them her way.
Related Topics
Related Posts
Comments