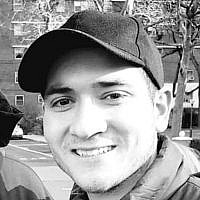 The Blogs
Daniel Edelstein
Apply for a Blog
Advertisement
Please note that the posts on The Blogs are contributed by third parties. The opinions, facts and any media content in them are presented solely by the authors, and neither The Times of Israel nor its partners assume any responsibility for them. Please contact us in case of abuse. In case of abuse,
Report this post. 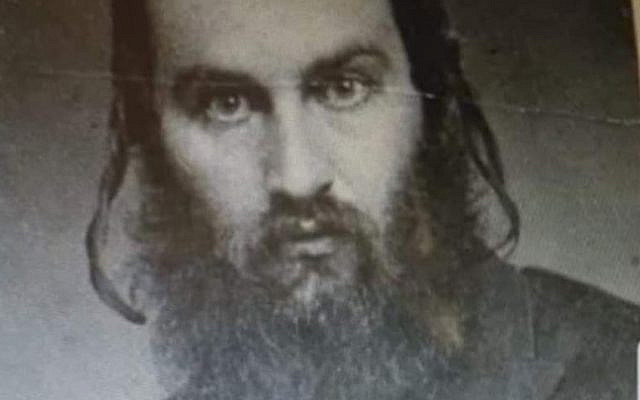 My patrilineal family have been disciples of the Vizhnitz Hasidic dynasty, spearheaded by the Hager family, since its inception. Though no one since my great-grandfather overtly dressed or lived a strictly Hasidic lifestyle, the connection to Vizhnitz was still unsevered. I myself grew up under its shadow: I lived in the Hasidic enclave of Boro Park until third grade (though I attended a non-Hasidic yeshiva in Midwood); I received my upsherin at 3 years old from the late Rabbi Mordechai Hager of Monsey (who, much to the horror of my mother upon my return home with my father, left me with two strands of Hasidic payot topped with a bald head); and I was raised on family stories of Old Europe and World War II from as far back as I can recall. My father, a native Yiddish speaker from Vienna born to Romanian/Hungarian Holocaust survivors, passed on that direct legacy to pre-War Jewry.

Even after we moved to Midwood, we remained connected to Vizhnitz. For many of my middle childhood and early adolescent years, I would escort my father once a year for Hoshanah Rabbah prayers at the primary Vizhnitz synagogue in Monsey under the auspices of the aforementioned Rabbi Mordechai Hager. I recall the thunderous sound of thousands of lulavim synchronously shaking at different intervals. Afterwards, my father would take me to the Rebbe’s personal sukkah to receive a berakha [blessing]. My father would always be allowed by the other Hasidic disciples to skip the long-winded line – whether because his lack of Hasidic garb made him clearly stand out as a non-local who travelled from afar or because some knew the Rebbe spoke with him on an intimate basis (“Edelstein HaLevi fun Vien!”, “Edelstein the Levite from Vienna!”), I still don’t know. Perhaps both.

In fifth grade, I spent Yom Kippur [the Day of Atonement] with my father and two brothers in what were mass makeshift lodgings for several families at the Vizhnitz of Monsey. In sixth grade, when the Rebbe was once an honored guest in Boro Park for a given Shabbat, I walked with my father for over two hours to join the day’s services. To this day, my father’s cousin, Hershey Edelstein, calculates the Jewish zemanim [times] for Vizhnitz’s calendar according to their custom. 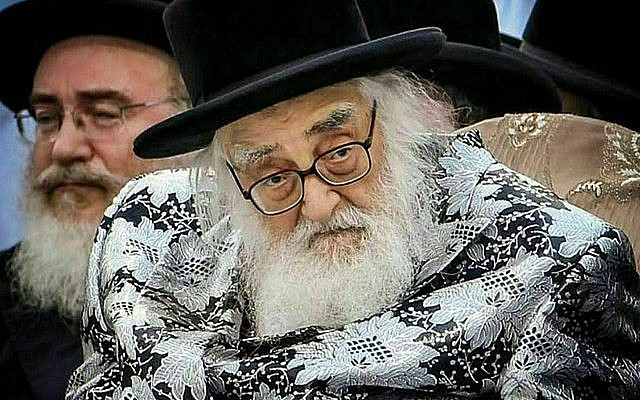 Our more extended family ties intimately to Vizhnitz as well. In this case, it relates to the year 1944; the to-be personal assistant of two Vizhnitzer Rebbes; and war news delivered to the renowned Satmar Rebbe, aka Rabbi Yoel Teitelbaum, in his hometown of Satmar [then Szatmárnémeti, Hungary; now Satu Mare, Romania].

In 1994, Yitzhak Dovid Rezmovitch, the former gabbai [personal assistant] to Rabbi Meir Hager and his son Rabbi Moshe Yehoshua Hager of Bnei Brak, Israel, published a 492-page memoir entitled Yamim M’qedem, Days of Old. In it, he largely relays his experiences during WWII as a youth. At this time he was residing in Boro Park, Brooklyn, where my family was also living. A mere year later, in 1995, he notified my father that a section of his work included a section of my great-grandfather [to whom he was related] and the Satmar Rebbe, proceeding to grant him a copy which he personally signed.

Below are excerpts from the relevant sections of the autobiography. The original is in Hebrew; I did my best to translate as faithfully to the text as possible.

The cover of Yamim M’qedem.

Personalized address from the author to my father.

First of two pages in the autobiography describing the author’s encounter with my great-grandfather (p.106).

Second of two pages in the autobiography describing the author’s encounter with my great-grandfather (p.107).

To my dear and honorable friend, the avrech…[some other honorifics I can’t fully make out]…, our teacher the master, Simcha Edelstein

From his dear friend who desires his utmost goodness,

MEETING WITH THE SATMAR REBBE

[i.e., R’ Yoel Teitelbaum; honorific used here in lieu of his name is “kavod qedushat adoneinu moreinu v’rabbeinu m’Satmar zekher ṣaddîq l’berakha,” lit: “the honor of the holiness of our master, our teacher, and our rabbi from Satmar, may the memory of this righteous one be for a blessing.”]

In the morning hours, at approximately 9:00, we arrived at our desired district. The train carriages had already been emptied of people beforehand, for at the crossroad the peasants and workers who travelled to their homes departed.

That same day – Wednesday, the 12th of Nisan [i.e., April 5, 1944] – a decree was issued into effect: Every Jew is obliged to wear the yellow “Star of David” on the left side of his clothing, and if they [i.e., the authorities] caught anyone without it, “there is but one law for him…” [a biblical idiom referencing Esther 4:11, where the same words are used in reference to the death penalty].

I now remembered that I actually packed it between my belongings, only that I had forgotten that the law was in effect. At the train station in Satmar, many Jews were waiting – this one for his father, this one for his son, this one for his wife, the other one for his relative. And they all inquired of the child who was departing from the train carriage alone, without any escort at all. They beheld and wondered; they approached me and began to inquire from where I arrived and to where I am headed.

I relayed the chain of my affairs as they are. Regarding their question as to whether I have a relative or acquaintance in Satmar, I responded that Rav [lit: “master”] Yitzhak Yaakov Edelstein is the brother-in-law of my uncle Rav Hirsch Leib Meisels of Slatfina [modern-day Solotvyno, Ukraine].

The locals escorted me to Rav Edelstein, and warned me that it is incumbent upon me to wear the “Star of David.” I removed it from my pocket – to everyone’s astonishment, who were amazed that my head was on my shoulders and that I am a person of such proper organization [i.e., at such a young age]. I explained to the family members my story, and everyone listened with curiosity and alertness. What interested them most was in regards to frequent rumors about the horrible bombshells in Budapest, and to every detail I was able to answer with precision and clarity.

At dusk, I went with Rav Yitzhak Yaakov to the Beit Midrash [lit: “House of Study”] of the Satmar Rebbe. The venerated rabbi entered for the Minḥa [afternoon] prayer, and his countenance was pale as snow. We saw that his thoughts were wandering into their own world. They [i.e., the locals] explained to him that a young lad had just arrived from Budapest, and immediately I was asked to depict the situation there. He had many Hasidic disciples and admirers in Budapest and across Hungary, and thus the matter touched his heart to hear about the wellbeing of his brethren [lit: “aḥeinu benei yisrael,” “our brothers the sons of Israel”]. At the end of the conversation, the rabbi expressed: “You have revived me; thank God that life and peace is with our brethren, and may God have mercy.”

In the [Edelstein] house, they prepared a tasty dinner, and due to excess exhaustion I slept a sweet night’s sleep, without the interruptions of bombings, sounds, wailings, and running to the shelter. I gave thanks to the good Lord, and I thought: Soon, I will reach Grosswardein [modern-day Oradea, Romania; then part of Hungary] to be in the shade of Maran [lit: “our master” in Talmudic Aramaic, i.e. Rabbi Chaim Hager, the fourth Rebbe of Vizhnitz], may his memory be a blessing.

The members of the Edelstein family attempted to change my decision and spoke to my heart to stay for the days of the holiday [i.e., Passover, which was to commence two days later], but they were unable to.

Rav Yitzhak Dovid ended up spending the Passover holiday in Grosswardein, which in 1944 spanned from April 7 until April 15. Around two weeks later, in the first week of May, the Nazis established the Oradea Ghetto following Operation Margathe, which would be the second-largest in Hungary’s wartime borders. Its populace was deported to Auschwitz in nine subsequent phases. The Vizhnitzer Rebbe and his family were ultimately able to be smuggled out, crossing the Romanian border where they staked out the remainder of the war in Bucharest.

After the war, Chaim Meir and son Moshe Yehoshua relocated to Bnei Brak, helming Vizhnitz in the Holy Land; son Mordechai by contrast immigrated to New York, taking on the dynasty’s mantle in the United States. He originally settled in Williamsburg, but sensing the moral challenges of its city streets three decades before gentrification, announced his plan to relocate headquarters to the more rural and remote Monsey in 1964, where he lived until his passing in 2018.

The Jews of Satmar would ultimately be rounded up into the Satu-Mare Ghetto along a similar timeline on May 3, 1944; its subsequent liquidation occurred over six stages between May 19 and June 1 of the same year. My great-grandfather was martyred at Auschwitz towards the end of this period – around the eve of the holiday of Shavuot, which that year fell on May 27, 1944 [Hebrew date: 5 Sivan 5704]. Yehi zikhro barukh. May his memory be blessed.

The Satmar Rebbe for his part, after a tumultuous process still not entirely understood, was able to be smuggled out of Hungary en route to Switzerland, where he eventually moved to Jerusalem. A year in, the Rebbe left then-Mandate Palestine and set up his communal center in New York’s Williamsburg neighborhood. His Hasidic sect eventually came to be the largest in post-war Jewry, with Rabbi Yoel Teitelbaum himself achieving a renowned founding father status to this regard.

It’s an honor knowing my great-grandfather had a significant, even if fleeting and indirect, role intersecting these two rabbinic dynasties’ stories. 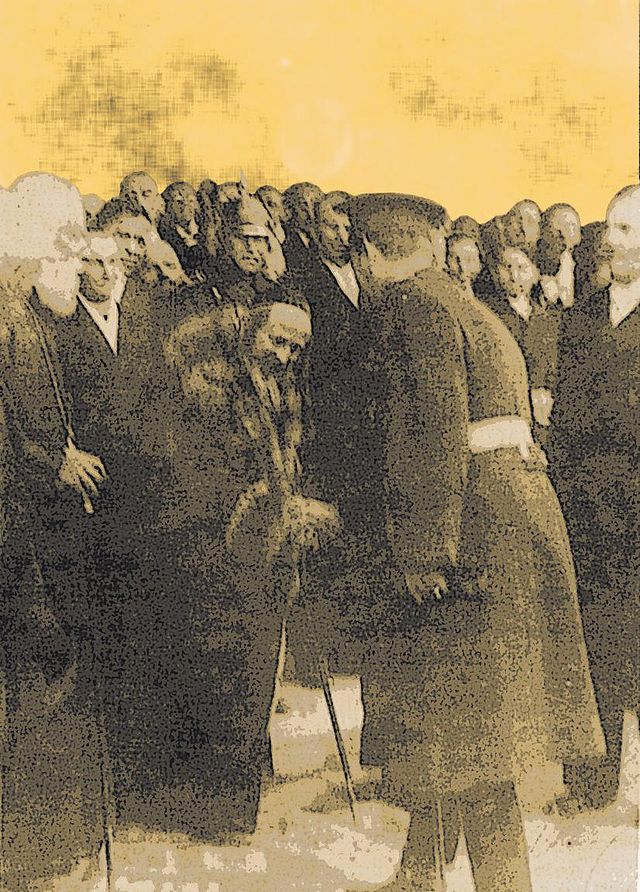