I met Jeremy Corbyn in 2003, a full 12 years before he became a household name.  It was after I’d attended a meeting of the Newcastle District Labour Party.  I was a ward delegate at the time.  We chatted for a couple of hours about a wide range of subjects, some of which I feel compelled to speak out about following the recent allegations of anti-semitism against him.

“The Lie travels around the world, dressed as the Truth, satisfying the needs of society, because, the World, in any case, harbours no wish at all to meet the naked Truth.” ~ Anonymous.

He sat radiating confidence and warmth and to my eye there was a type of brightness about him.  I’d liked him immediately.  I think he liked me because (all modesty aside) my political thinking is novel (often radically ahead of the times).  He has a good eye for people like that.

Even though he’s an extrovert, he’s cultivated the wisdom of listening to the quieter and more introverted people around him, so when you sit down to talk with him he gives you his whole attention.  His entire attitude radiates that he values your opinion, and when you give it to him he’ll ask you for clarification on one point or another, until he’s completely sure he’s understood you.  In return, he’s open and honest about his views and opinions, and about his life, most of which is public knowledge, but certainly not all of it.  For instance, I’ve never heard mention of the Jewish part of Jeremy’s family in any of the bio’s I’ve read.

He opened our conversation by asking me about my experience of political activism and I’d told him about my activities (age 22) in the legalize cannabis campaign.  It had been mostly fun but I’d been shocked by my few run ins with the press. The whole experience had left me disinclined to venture into the spotlight again. I had vowed to operate firmly behind the scenes after that. He’d thought that was a pity (the party needed more women in the front line) and he regretted the way I’d been handled by the media.  In return I guessed that he must have had his own difficult experiences.  He had.

“The only time I’ve ever seriously considered resigning from politics, was after a false but extremely hurtful allegation in the press.  Not hurtful to me you understand, because I have a fairly thick skin, but hurtful to my family.  Especially my aunt.  That’s what really upset me, seeing them upset.  It made me angry too.”  Which was perfectly understandable, I thought, as I stared into his frank blue eyes that shone for a moment extra brightly at the memory.

His aunt was connected to the Corbyn family by marriage, though I don’t think the connection was that direct. But Jeremy had a special place in his heart for the Jewish lady (a holocaust survivor), who was an aunt to him as a boy.  They had remained close, and she’d been proud of him when he went into politics and became an MP. Then as a young and relatively inexperienced MP he’d had his first experience with how devious and underhand some of the press can be. Not all the press, you understand, but definitely some of them. The term ‘hack’ seems appropriate.  The thing is, you don’t necessarily know who is a hack and who is a decent journalist before your interview.

The atmosphere of his interview with the hack had been relaxed, and he’d been as forthright and direct in answering her questions as he was with everyone.  At the time he’d recently taken part in some type of local Jewish event, which he mentioned in passing to her.  Her questions had turned more general about the diaspora and the historical oppression of the Jews in Europe, and then she’d asked “where do you think the allegations of blood libel come from?”  And he’d said he didn’t know but he had theorized that there may have been a misunderstanding about the bris.  And from that isolated comment the reporter had written a horrible, offensive and hurtful to his family piece of trash article saying that Jeremy Corbyn MP was an anti-semite that believed the blood libel.  His aunt had been very upset by this.

“It’s called Hotzaat shem ra in Hebrew” he said quietly, before asking if I knew about the Jewish rules of Halacha?  His aunt obviously had an enormous impact upon him because she was the one who convinced him to stay in politics after it. “Otherwise, the liars win” she’d said.

When I asked him about the Israel/Palestinian conflict, he backed a two state solution but was also realistically pessimistic about the probability of getting one. Predictably maybe, I likened the situation to Northern Ireland, and he told me about his experiences in helping to get humanitarian aid to the Palestinians during the Thatcher years, and about the heart-breaking suffering of their hungry children which he saw first-hand during his travels to the region.  Jeremy is a rare blend of a man with a handle on both the practical and the idealistic, so while he accepts that conflict between people will always happen in the world, he also believes that both parties in conflict have a responsibility to prevent the suffering of the children as much as it is in their power to do so.

His practicality can be seen by the way he established a dialogue with Hamas, because you cannot make peace with anyone except by establishing a dialogue.  He was not in agreement with the stated aims of the organization however.  He told me he would oppose the forcible removal of Jews from their homeland just as vigorously as he opposes the forcible removal of the Palestinians from theirs.

Jeremy personifies the modern archetype of the social justice warrior.  This wasn’t appreciated by his detractors at the time who had thought to make political capital by calling him a terrorist sympathizer, but a world where no-one risked such defamation would be a world where peaceful resolution to conflict was unknown.  It would, to use Buddhist imagery, be a ‘world on fire’.  Perhaps that is why, to risk defamation, and to take it on the chin, is a Mitzvot?

So who is Jeremy Corbyn?  In my opinion he is a good man and a Tzadik.  I thought 16 years ago that he’d make one of the best Prime Ministers that the United Kingdom has ever seen and 16 years later my opinion remains unchanged.

Afterward ~ This blog is usually about Gematria, the Merkabah and the birth of the Alephbet, which I intend to get back to asap, but I can’t leave it here today without showing you a new discovery with biblical gematria which is tremendously exciting!

Note from Reuben Levi ~ “It should be pointed out that the Hebrew names of the days aren’t actually related in any way to the names “Monday,” “Tuesday,” etc. They are just numbers. “Rishon” means “first [day],” “sheni” means “second [day],” “shlishi” means “third [day],” etc. In European languages, the days have the names of gods (Wednesday = “Wodin’s Day,” Thursday = “Thor’s Day,” etc.― or celestial objects, e.g. “Sun Day,” “Moon Day,” etc.) That sort of thing would be considered idolatrous in Judaism, so in Hebrew the days just have numbers, not names.” 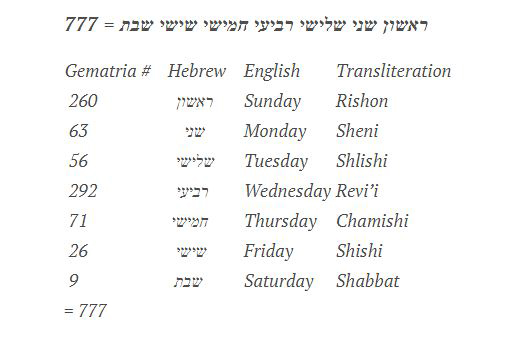 That’s it for today.  Stay tuned for more numerical honey!