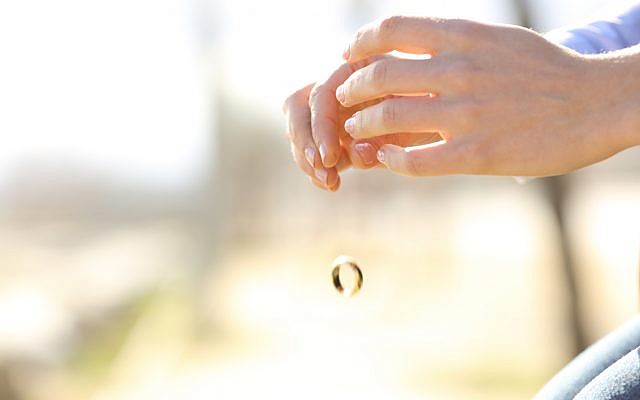 From a young age, I taught my sons about the problem of modern day agunot, get-refusal, and Jewish divorce. Years ago when they were little, we used to make signs and go to ORA (the Organization for the Resolution of Agunot) rallies against those who prevented Jewish divorce — protesting against get-refusers and their supporters, doing whatever we could to help discourage this form of abuse and make a difference in Jewish families’ lives. I became aware of the issue when a friend of a friend was the victim of withholding a get, and it felt close to home that someone like me could have this happen to them. I was compelled to do what I could, but until this week, I had never seen so directly how my actions made a difference. As it turns out, “wasting” my time arguing with a stranger on social media wasn’t a waste at all.

I celebrated two divorces this week. I wished “mazel tov” to the former couples celebrating new possibilities and futures. I couldn’t help but compare the two cases to each other. The first was a couple close to me with no issue with giving the get. The process was difficult enough — it took a long time, there were lots of complicated issues, emotions, adult and kids’ feelings to address, financial considerations, and more. I have relationships with both the husband and wife, and I took care to maintain my connection with both of them. The process was drawn out — too long for some — but there was a willingness by both the husband and wife to move forward, separately, with their own lives. After the get was given, some friends and I made a party to celebrate the new beginnings.

The second case I became involved with was between a couple who I didn’t know personally. I simply shared an image from ORA on social media. It described the facts of the case, that the husband had been refusing to give a get to his wife for several years, and ORA’s declaration that this is a form of domestic abuse.

Without a get, a religious woman is unable to ever remarry. She is called an aguna, a title previously used to refer to rare and tragic circumstances of a woman whose husband was physically unable to give her a get, usually because his whereabouts were unknown.  Rabbis would go out of their way to resolve these cases (including, most recently, those who worked in the Twin Towers and disappeared on 9/11 and couldn’t be identified). Now the term is used to refer to someone whose spouse refuses to give her a get. This means that the man who withholds a get has complete control of her ability to have any future relationships, intimacy, and fertility. While it is unusual, there are halachic loopholes that give a husband workaround solutions to this problem, solutions that are unavailable to women due to the nature of the halachic marriage contract.

Get refusal was a rare issue in previous generations, but in modern times, the halachic system has been abused by those who want to harm their spouse in this way. In recognition of this, modern halachic authorities have created a legally binding solution that can be enforced in civil courts (outside of Israel, where there is no civil court for marriage or divorce) to prevent agunot — a halachic prenuptial agreement (my husband and I signed one when we married nearly 20 years ago.) The halachic prenup sets out a legal course of action should the couple ever decide to part, and it provides security in the process for both the husband and wife. Among those who signed halachic prenups in the US, there have been no known cases of get refusal.

However, not all couples sign these agreements. Get refusal has been used by unscrupulous or vengeful spouses as leverage in custody and/or financial arrangements. Custody decisions should be left to the family court to decide based on the best welfare of the children, not as a negotiating tactic for one side by holding the woman’s future hostage.

My online advocacy in this aguna case would have been limited to the simple click of a “share” button had a stranger not decided to message me in response. She was a friend of the husband and argued that he should be allowed to use the get as leverage for child custody. Over the course of the next few days, I engaged in a discussion with her, sometimes heated, as I tried to explain that get-refusal is abuse and it’s unacceptable to use it to negotiate custody. I reminded her that a husband who witholds a get is holding his wife hostage and demonstrating poor parenting. Any fair judge would take that factor into consideration when deciding custody. Conversely, a man who issues a get without issue demonstrates that he is willing to do the right thing, even in difficult circumstances, and this is an excellent example to his children.

This woman was not convinced by my logic and the conversation didn’t end well. She resolved to encourage the husband to continue to withhold the get.

I debated what to do. Should I “out” this woman? Should I share her information on social media? That felt wrong, but how could I make a difference?

Some wise friends encouraged me to share the info with ORA, as it might affect the case. So I contacted ORA professionals and shared with them whatever information I had. Three days later, the wife had a get in her hands.

ORA later confirmed that my information was instrumental in helping to resolve the case, along with all those who had also shared and got involved. Until that moment, I had questioned whether my efforts were making a difference, if it really mattered. I never knew if my simple click of a button was of any significance.   But for that former aguna who is now free, it was everything.