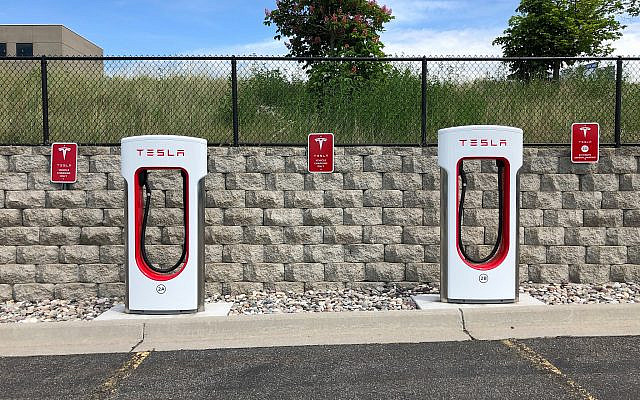 Tesla cars to be approved for sale in Israel (Jerusalem Post January 4). I was driving my Personal Transportation Device, my PTD. Some readers with older Personal Memory Devices, PMDs, might “remember” that this was once known as a car.

Suddenly, I felt that I had dropped into a parallel universe. There, in front of me, was just that, a car. My PMD was, of course, too new to “remember” these relics of the past. I knew it was a car because I had recently seen a picture in a magazine. I hasten to inform readers that I was looking at a magazine as part of my research into the distant past, there is no problem with my PMD. I do not need to hold a piece of crushed tree in my hands to get the latest news.

I quickly thought to myself, and, of course, my PTD, I’d like a closer look at that … car. My PTD responded immediately. It would have found itself in the local maintenance shop if it hadn’t.

We drew alongside the car. Although it had seen better days, the markings on the back were quite clear. It was an ancient Tesla, a Battery Electric Vehicle (BEV). Yes, dear reader, there was a time when people, unaware of the terrible consequences for life on our planet, used battery-powered cars.

I tried to stop myself from getting too excited. My PTD is fitted with detectors to sense my mood, check my alertness, assess my alcohol level. Not that I am driving, but my PTD must decide if I require a blanket, a cup of coffee, a comfort stop.

Before we woke to reality, the Tesla had been promoted as environmentally friendly, a way to save the planet. But we now know that the factories that manufacture its batteries cause a great deal of pollution. The pollution for the battery for just one Tesla is the same as driving a conventional car for eight years.

Older readers may remember the strange sight of brake lights flashing on and off on our motorways. Because the Tesla used the brakes to recharge the battery, something called regenerative braking, drivers had to keep tapping the brakes to get enough range. It took a while to get used to braking in order to go further.

Of course, the Tesla did have some advantages.

The old gasoline cars could be refuelled in a few minutes. Drive in, fill up and off again. The Tesla needs a full hour and a half to top up the battery. Plenty of time for a cup of tea, some fish and chips. Even a quick visit to the motorway motel to see just how grateful was the blonde/blond (no equality problems here) hitchhiker you picked up. You might well need some comforting after suffering from Tesla Range Anxiety with so many miles between charging stations.

(In the old days you might have slipped into the back seat, but that’s already taken by the spare tyre you have been forced to buy. Tesla doesn’t consider a spare to be an essential part of its car.)

Nikola Tesla, who died back in 1943, would be proud that his name, once only known to a few physicists, is on everyone’s lips.