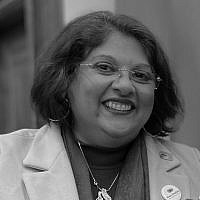 The Blogs
Hifsa Haroon-Iqbal
Apply for a Blog
Please note that the posts on The Blogs are contributed by third parties. The opinions, facts and any media content in them are presented solely by the authors, and neither The Times of Israel nor its partners assume any responsibility for them. Please contact us in case of abuse. In case of abuse,
Report this post. 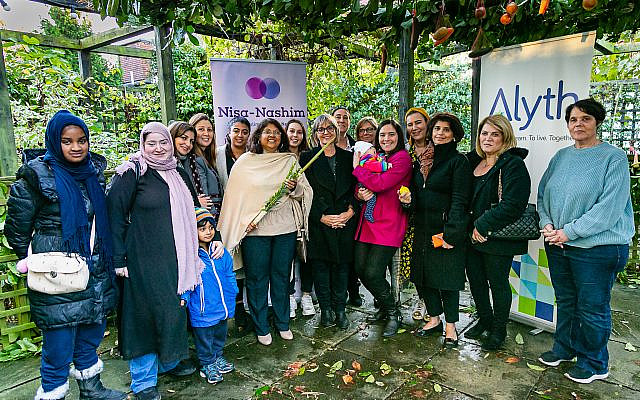 Jewish and Muslim women in a show of unity after the Halle terror attack, with Hifsa Haroon-Iqbal in the centre holding a lulav and etrog. (Yakir Zur via Jewish News)

This week, I had the pleasure of celebrating Succot at a synagogue in North London. As a Muslim from Staffordshire that may seem surprising.

I was delighted to make the long trip ‘down south’ to the succah at Alyth Gardens Synagogue for two reasons.

It was both to be part of a significant Jewish festival, but also to offer my friendship, condolences and on-going support, following yet another attack on Jews, in Halle a few days earlier.

For anyone that may be unaware of what happened, whilst Jews were observing the holiest of days, the rest of us watched in dismay as the news unfolded from Germany, that a gunman had tried to enter a synagogue where 80 people were worshipping.

He fired at the door and, unable to enter, killed two innocent people close by. Had the security doors not been strong enough, there would have been many more casualties.

It is a sad testament that synagogues have to have such security measure in place as a deterrent from such attacks. This was not the first attack on Jews and sadly, coming just 12 months after the murder of 11 worshippers at the Tree of Life synagogue in Pittsburgh, it will not be the last. The gunman filmed himself carrying out the attack and openly expressed his anti-Jewish, anti-women and anti-immigrant views.

Being shown around the synagogue yesterday evening, listening to the rabbi talking about her faith, her beliefs, describing the teachings and showing us the Scrolls, really made me appreciate, once again, just how much as Jews and Muslims our faiths are intertwined. We need to remind ourselves of this.

The event in Germany was a stark reminder of the reality unfolding across Europe and indeed the rest of the world. Antisemitism is rising, alongside anti-Muslim hatred. As Muslims and Jews it is in all our interests that we develop friendships and mutual respect for each other.

We need to action these words, not just say them; we must develop a better understanding of what this means in reality. Only then can we wholly understanding how hate is manifesting itself in our world today and robustly challenge the rising levels affecting both our faiths.

We must not let Middle East political conflicts and the suffering of the populations there define our religious relationships here. We must be Active Allies, we should be natural allies.

It is the very reason I am a trustee of Nisa-Nashim, the Jewish and Muslim women’s network in the UK that brings together our women of faith, in friendship. Friendship must be the anchor for what we must to do to effectively stand together against hatred, against bigotry and to call out the ugly narrative of division.

About the Author
Hifsa Haroon-Iqbal is National Chair of Nisa-Nashim. She has been active in the world inter-faith working for over 25 years and was awarded an MBE for service to community cohesion in Her Majesty’s New Years Honours 2012. She was appointed a Deputy Lieutenant in Staffordshire in 2011. Hifsa is married with three children, two daughter in laws, 2 grandchildren and 4 cats”
Related Topics
Related Posts
Comments