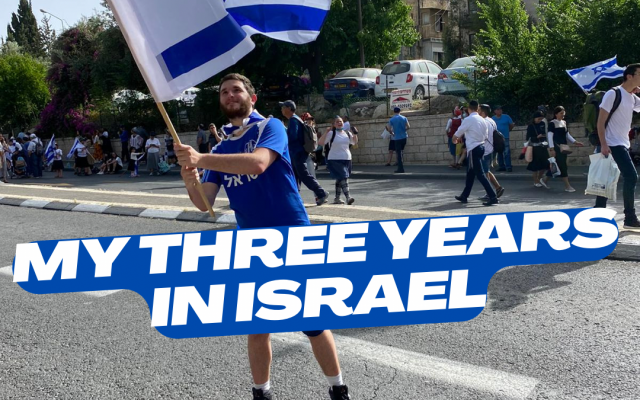 As I depart from Israel after three years, I reflect on the incredible journey that just took place. I lived through three nationwide lockdowns during a global pandemic in the Old City with a view of the Kotel from my bedroom window. I was in the building next to the Vice President of the United States with secret service members all over the place. I was here during the signing of the Abraham Accords watching peace in the Middle East happen in front of my eyes. I was here during a war with Gaza. I was here in Israel.

In the Negev you can see a thousand stars. The coral reefs in Eilat are beautiful. The sky turns orange in Tel Aviv during the most incredible sunset one will ever see. There’s Roman remains in Caesarea; A Crusader fortress in Akko; Herod’s palace on Masada; Mysticism in Tzfat; and Yom Yerushalayim parades are unlike anything else in the world.

I hiked up Mount of Olives seeing graves from last year next to graves from over 2000 years ago. I paid my respects to the fallen Israeli Soldiers at Mount Herzl. Saw Sukkahs and Menorahs all over town during the holidays. Put my feet in the Kinneret. Visited tombs of Jewish legends like the Rambam and the Ramchal. Visited a Holocaust survivor in Haifa. Saw Jews and Muslims working side by side vaccinating all peoples regardless of religious affiliations during the pandemic.

I crawled in the tunnels built by King Hezekiah, saw ancient ruins, floated in the Dead Sea, walked on the Old City walls built by the Ottoman Empire, hiked underneath the Temple Mount, prayed at the Western Wall including being the only man in the world there on Yom Kippur during one of the national lockdowns.

Meeting up with friends at the Kotel and watching them cry after explaining what this ancient wall meant to us was transcendent. Volunteering on an IDF base made me feel the pride of working side by side with Israel’s guardian angels. Walking down Mea She’arim lost on Shabbos in my purple shirt as person after person invited me into their homes for water and a meal made me feel like Judaism is a true loving family. And how could I forget the big bearded Rabbis with wisdom that surpassed anything I learned in a college classroom.

I lived in the Old City for three years and felt like I was living the dreams of 2000 years worth of my ancestors who would have done anything to come to this land. Now Jews get to be flown in for free on Birthright. But for me to live here, visit the Western Wall regularly and learn the depths of the Torah made me feel like I am living the dream of a few millennia’s worth of my ancestors.

After reading Biblical stories like Joshua, Hannah or Jonah you see Israel totally differently. As I rafted down the Jordan River I imagined how this was where my ancestors crossed into the promised land over three thousands years ago. Visiting Old Jaffa right outside of Tel Aviv I imagined the cedar trees King Solomon imported from Lebanon and how this was the place Jonah set sail fleeing from delivering a prophecy. Being in Shiloh I felt the pain of Hannah whose desperate prayer for a son was answered.

Judaism is not just an identity one feels but a promise that anywhere you go in the world there is someone there who loves you and a family that will welcome you in. It is also a set of values that refine the soul enabling anyone to transcend into their best self.

Morality is found all over Israel which is the only country in the world that has a net gain in trees every year. Most homes use solar electricity to heat up their water. The IDF is the most moral military in the world. The values of Israel are an example to the world.

I learned Torah and traveled Israel not just for my own pleasure but because I feel it is the greatest way to honor my ancestors. It is equally important to continue the traditions they chose to suffer, be exiled from their homes or even die to preserve. A tradition called Judaism, the greatest tradition ever.

I honor my ancestors because they have shown for over three thousand years this is worth preserving. They are the giants on whose shoulders I stand. They are the ones I do this for. They burned in the Holocaust and a few years later founded the State of Israel. An impossible accomplishment by an impossible people.

How important were these three years to me? They equal nearly three and a half thousand years of being able to connect with my family. The native people of this land. The people who shaped the world. The people who are impossible and immortal. I got to connect to all of them and beyond.

My three years in Israel have been life transforming. They have been transcendent. I am so grateful for this chapter of my life. A chapter I never thought I would have. A dream turned into reality.

As this chapter closes I realize it’s just a link in the chain and I will bring Israel with me wherever I go. I love the State of Israel. I love being a Jew. I see what it offers the world. What an incredible adventure I had in the Holy Land, in the State of Israel.

About the Author
Jacob is experienced in Israeli advocacy and very passionate to spread awareness for Jewish and Israeli causes.
Related Topics
Related Posts