The Blogs
Yakov Saacks
Apply for a Blog
Please note that the posts on The Blogs are contributed by third parties. The opinions, facts and any media content in them are presented solely by the authors, and neither The Times of Israel nor its partners assume any responsibility for them. Please contact us in case of abuse. In case of abuse,
Report this post. 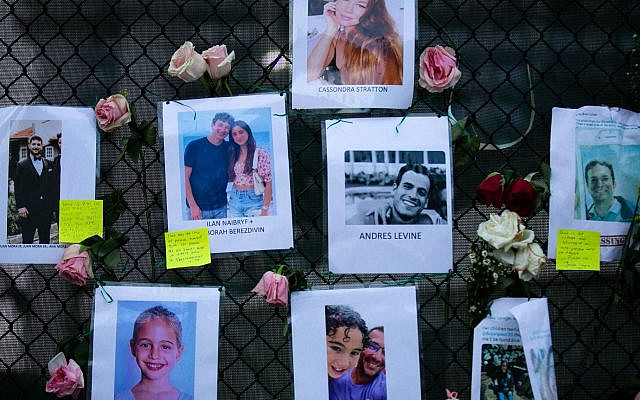 Images of Andres Levine, Ilan Naibryf and Deborah Berezdivin, three of the Jewish victims of the Surfside building collapse, in center among other photographs of those missing posted at a makeshift memorial on the building site in Surfside, Fla., June 26, 2021. (Andrea Sarcos/AFP)

A few days after the terrible news that a building had collapsed in Surfside, Florida, and learning that one of the founding members Brad Cohen together with his brother Gary were among the missing or unaccounted for, I decided that if I am the empath I feel myself to be, then I have to visit with the families – and the Cohen family in particular.

I arrived at the reunification center at the Seaview Hotel where the families were gathered awaiting further news of the status of their loved ones. After going through much scrutiny and showing my chaplain badge every five feet, I finally entered the big hall.

There were two observations that struck me immediately upon entering. My first thought was how quiet it was. While families were either sitting or standing together, they were, for the most part, just silently and painfully waiting for news. While some families would welcome any news at that stage, others would welcome only good news. I took on the role of offering a smile and a bottle of water to the waiting families and only engaged in conversation if the family engaged me first.

The second thing I noticed was the incredible amount of support in the room. There were tables of “vendors” offering their services and help to those assembled. These were not your typical vendors selling their wares, but rather vendors offering their help at no charge.

Aside from the expected angels at the Red Cross who are always at the forefront, there were also so many good, kind and caring people who simply were there to help in any capacity. Examples would be a company like Verizon offering free international calls, or local organizations, religious and not religious, offering money, housing and other necessities. I was told by representatives of the Jewish Community Center that there is a whole network of snowbirds who are offering their Surfside homes to the displaced victims of this tragedy.

There was food, snacks and drinks available 24/7 as well as fully catered meals including glatt kosher meals. I have no idea who paid for this huge outlay of catered food. I assume it was the local community banding together under the leadership of Rabbi Sholom D. Lipskar, who directs the local Shul, where many of the victims belonged. The Shul itself has been transformed into a huge clothing and dry goods facility where families can pick up anything they want or need while they await.

Now came the hard part, visiting intimately with the Cohen family. I met with mom and dad as well as some of the family, including a spouse and an adult child.

There were a few reasons as to why this was a difficult task. For one, this is a family whom I have known for over 25 years. This hit very close to home. Brad used to move into my house every Shabbat for years while he was studying to be an orthopedist. I used to study, eat, schmooze and pray with him. I am only a few years older than him, so he was my contemporary as well as my constituent. I was the officiant at his wedding as well as his confidant.

Beyond that, even though I am a rabbi and have been for more than 30 years, I had nothing concrete to offer. I had no answers as to why this happened. No one does. Even greats like Moses, Solomon, the Baal Shem Tov, the Rebbe have no idea as to what, why or how God works. I felt impotent and weak. I heard many ask the same question. Why would God do this?

I once heard an answer by the great Rabbi Jonathan Sacks, former Chief Rabbi of the U.K., which resonates with me. He opined, “There is no way to answer as to why the Holocaust happened.” He continued, “I believe that the reason there is no answer is because an answer is hurtful. Can you imagine if there were an answer, then people would go around and say that so and so died because of such and such. This would be degrading, and it is better that we do not know why.”

Another reason I found myself in a very uncomfortable spot was that I was functioning in a very limited and narrow role. I would and could not give the family false hope. I am not a prophet and there is no way I could know what the future holds. I could not be empathetic as I could barely wrap my mind around the magnitude of what happened. I did not want to be sympathetic, as who wants sympathy when they just want their loved one back.

So, what did I do? For the most part, I shut up and just nodded my head and listened. Every so often, I said that I am sorry for what happened and for what you are going through. Once in a while, I clandestinely brushed away a tear so as not to cause more grief as this is not about me. Lastly, we sat and we prayed together. My particular prayers were that God should have compassion, and grant these families strength.

I acutely remember 9/11 – how can we forget. While I also remember praying at the site where bodies were being brought to shore after TWA Flight 800 went down, I do not remember feeling so much raw pain. This does not mean that I was not feeling hurt, scared or lost. I was; I just do not remember the intensity that I felt during my visit at Surfside.

I guess I matured.

About the Author
Rabbi Yakov Saacks is the founder and director of The Chai Center, Dix Hills, NY. The Chai Center has been nicknamed by some as New York's most Unorthodox Orthodox Center.
Related Topics
Related Posts
Comments
Advertisement