On the sixth anniversary of his passing at the extraordinary age of 106, I would like to reflect on the admirable life legacy of Sir Nicholas Winton.

Sir Nicholas has lived a long and inspiring life and I had the privilege of meeting him back in 2013, when he was 104 year old. I encountered then a lucid and witty super centenary. His unique sense of humor and humility were impressive.

The meeting took place in London, at the residence of the then Swedish Ambassador, Ms. Nicola Clase, and together with me was Mr. Eduardo Eurnekian, Chairman of the Wallenberg Foundation. 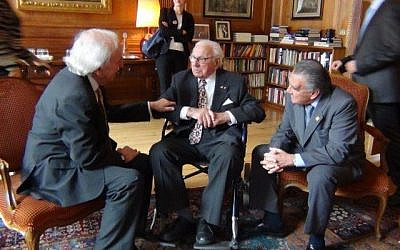 On that occasion, our NGO bestowed upon him and former Prime Minister Gordon Brown the Raoul Wallenberg Centennial Medal.

Sir Nicholas was the son of two German Jews, Rudolph and Barbara, who emigrated to London in 1907, two years prior to his birth. His original paternal surname was Wertheimer but upon their arrival in the UK, his parents decided to convert to Christianism and became the Wintons.

When he finished his studies, he started his job in the City as a stockbroker.

In December 1938 he planned a skiing vacation in Switzerland but his plans were thwarted following a phone call from his friend, Martin Blake, who asked to come to Prague to help him deal with his relief efforts in favor of the incoming Jewish refugees.

In Prague, Winton witnessed the plight of the Jews, and what impacted him the most was the precarious living conditions of the children.

Disregarding his work obligations in London, he decided to stay in Prague and set-up a makeshift office in his hotel room where he concocted an intricate plan to extricate as many children as possible from Czechoslovakia.

In no time, he became known in the city and hundreds of families appeared at the hotel, pleading for help, asking him to save their children.

The workload was so intense that he saw himself compelled to open another office and he asked his friend Trevor Chadwick to lend a hand.

From his office, he started contacting various countries which he believed could take the children. Sweden acquiesced to welcome a small group.

The UK accepted to receive children under the age of 18, provided that they found accommodation in British foster families, which should also place a 50 Pounds deposit to ensure they could finance their trip back home.

Winton spent one month in Prague and left in January 1939, six weeks prior to the German invasion to Czechoslovakia, but with the help of local volunteers, he continued working from his home, using unorthodox methods to save as many lives as possible.

Through his organization, between March and August 1939, eight trains carried 669 children (most of them Jewish) to Britain.

Among the “Winton children”, some became notable, such as  Alf Dubs, Baron Dubs, former Member of Parliament, Leslie Baruch, a renowned immunologist, Heini Halberstram, a famed mathematician and Renata Laxova, a reputable geneticist.

Winton was extremely humble and did not reveal his wartime exploits even to his wife, who by chance found a scrapbook with his list of children and that is how his awe-inspiring story became known to the public…

Back in 1988, the BBC program “That’s Life” invited Winton to participate without his knowing that most of the people sitting around him in the audience were children saved by him. This memorable and moving program became viral.

In one of the most memorable moments in television history, the  host asked: “Can I ask, is there anyone in our audience tonight who owes his life to Nicolas Winton? if so could you stand up please?. Tens of people in the audience stood-up at once, moving Sir Nicholas into tears.

Winton received many honors during his life, including a Member of the Order of the British Empire (MBE) and he was knighted by Queen Elizabeth in recognition of his work on the Czech Kindertransport.  He also was honored on several occasions by the Czech Government. 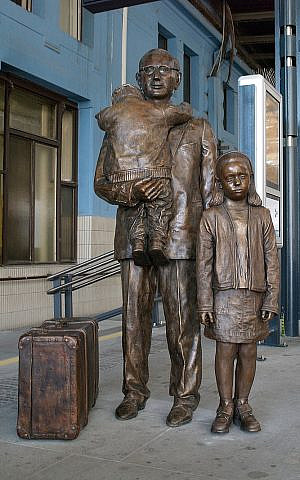 The Wallenberg Foundation commissioned in 2009 a commemorative stamp bearing his semblance, issued by the Israel Postal Authority. 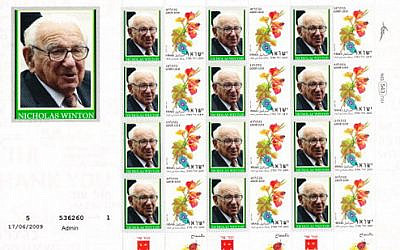 I vividly remember a question I asked him when we met in London. “Sir Nicholas, how do you see the world nowadays“?. He looked at me in a mischievous way and answered: “Topsy Turvy“.

Six years after his death, the world continues to be a topsy-turvy place, but the memory of Sir Nicholas will live on forever.