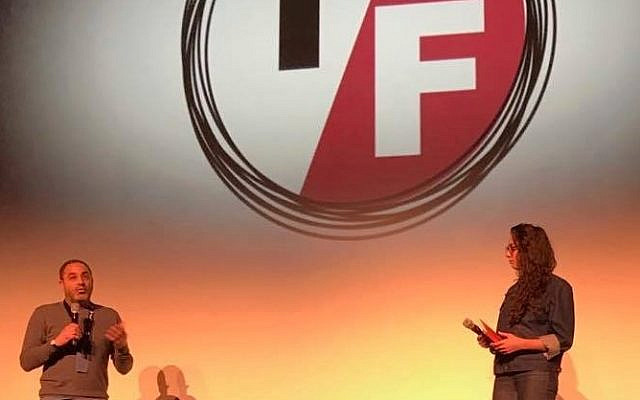 I live in Columbia, Missouri. Surprisingly, this small city hosts the most prestigious documentary film festival in America. It is called the True/False Film Fest. Last year, they sold over 54,000 tickets. Every March, this event consumes the town. If you don’t live here, it might be hard to understand its enormous grip. The entire town is covered in banners and stickers advertising the Fest. The Wikipedia page for the event sums it up: “The festival is sponsored by almost every downtown store, restaurant and bar.” The University of Missouri shows films on campus, two large churches show films, and a major hotel shows films. Plus, the hosts have partnered with the Columbia public schools to teach kids about cinema. In this sense, my whole town sponsors the film festival. So I believe that my whole town failed morally when the hosts chose two films designed to portray the Israelis as criminals.

The first documentary was called “The Viewing Booth,” produced by Israeli director, Ra’anan Alexandrowicz. In the film, a Jewish student who supports Israel sits alone in a viewing booth watching videos. The director shows her clips from organizations criticizing Israel or defending Israel. Alexandrowicz selected videos of events that all took place under “the Israeli occupation of Palestine.” He sits in the other room and asks her questions about the clips. Eventually, the film focuses onto a single clip, which is shown over and over. It is a video filmed by a Palestinian woman of Israeli soldiers entering her house and waking up her children to search the place. The video ends with the soldiers leaving and her son bursting into tears. Finally, the director poses this question to the student: How can American Jews still support Israelis, when they know they are committing so many crimes?

The message of the film was repeated by the True/False moderator, who started the Q&A by saying, “We all know about the injustice taking place under the occupation.” Alexandrowicz responded by declaring, “I hate the occupation.” To give you a sense of the tone in the room, I heard the man sitting next to me call the Jewish girl who supported Israel an “idiot.”

The second film, called “Mayor,” was directed by David Osit. The documentary followed Musa Hadid, the Christian Palestinian Mayor of Ramallah. The film made you feel like you were meeting Musa Hadid in real life; the Mayor loves his people and wants to improve his city. But the film singles out the Israelis as constantly hindering his good intentions. The festival description of the film states that Musa experiences “the less newsworthy aspects of oppression.” The message of the film is simple: Israel is the oppressor and the Palestinians are the victims. During the Q&A, Osit defined the Palestinians as the true owners of the land of Israel. He claimed that the Palestinians are being denied their right of return to “their ancestral homeland.”

How am I supposed to respond to these films? I believe that when these directors look at the situation, they don’t see the Israeli victims of terror attacks. They deny the waves of terror attacks that have come from the West Bank. Also, I see the historical fact that the Palestinians have been offered a state by the international community, but they turned it down. Thus, I see justified reasons for the presence of the Israeli military in the West Bank, whereas these directors do not. Instead, they view Israel as a criminal state.

I would like to make one more point. David Osit is not Israeli or Palestinian. He has chosen to interject himself against the Israelis. Yet, Israel allowed him to go into the West Bank and film as much as he wanted. Osit was allowed to film Israeli soldiers while they were in physical confrontations. Osit was allowed to make a whole film arguing that Israel denies the Palestinian basic rights. Think about the situation: the Israelis allowed a foreign filmmaker to film them and say whatever he wanted to say about them. If Israel is really denying Palestinian rights, then why do they allow freedom of the press? Ironically, the film proves that the Israelis are tolerant. The film itself disproves the message of the film.

After the screening of “Mayor,” I saw the director standing in the hallway. I was tempted to try to argue with David. Instead, I made a different decision. I am acquainted with a Palestinian who used to be a sniper for the Palestine Liberation Organization. To be blunt, he has killed Israelis. That being said, he has had a long journey. Now he is almost 70 years old, and he no longer advocates for the destruction of the Jewish State. Today, he tries to reconcile Jews and Palestinians, and he runs a school for Palestinian children. Just like the Mayor of Ramallah, he openly criticizes the Israeli government. But there is one big difference: he also criticizes the Palestinian leadership. He personally fought under Yassar Arafat, yet in his memoir he recalls that he was heartbroken when Arafat rejected the offer for a Palestinian State. I wanted to introduce the director to a Palestinian with a different view. So, I simply handed David a piece of paper with the phone number of this former fighter. David, if you ever read this, please give him a call.

On the local news, one of the directors of the festival explained, “We often hear from a lot of the coffee shops and restaurants that it’s, you know, one of the best weekends of the year.” And, “We have one restaurant owner who said that’s how they paid for their new walk-in fridge was just the True/False weekend.” When so many people sponsor the festival, even if they do not personally hand select each film, they still share some responsibility for the moral messages of the films shown. This year, The True/False Film Festival showed two films designed to portray the Israelis as criminals. This year, the festival chose to demonize one group of people.