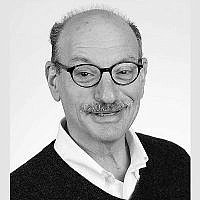 The Blogs
Daniel G. Zemel
Apply for a Blog
Advertisement
Please note that the posts on The Blogs are contributed by third parties. The opinions, facts and any media content in them are presented solely by the authors, and neither The Times of Israel nor its partners assume any responsibility for them. Please contact us in case of abuse. In case of abuse,
Report this post. 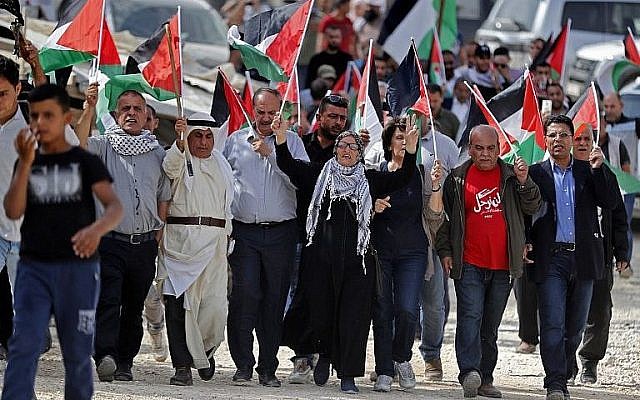 Illustrative. Palestinian wave flags during a demonstration at the West Bank Bedouin village of Khan al-Ahmar over Israel's plans to demolish it, on October 19, 2018. (Ahmad Gharabli/AFP)

When you enter my home, the first pictures that you come across are three photos of my grandfather, Rabbi Solomon Goldman, who died when I was 6 months old in 1953. The photos show him shaking hands with Chaim Weizmann, at the New York World’s Fair with Rabbi Stephen Wise and Albert Einstein, and speaking at the World Zionist Congress in August, 1939.  I display these pictures because I am proud of my grandfather and proud of the personal Zionist legacy that I inherited. I am proud to call myself both a Zionist and a lover of Israel, as anyone who knows me will attest.  My Zionism fiercely informs my rabbinate at Temple Micah in Washington, DC.

In this role, I returned last week from bringing a Temple Micah group to Israel. Our tour stops included Bet Shean, Givat Haviva, the Old City of Jerusalem, the Golan Heights, Tel Aviv and Tel Hai, to name but a few. We arranged for Shabbat dinners with Israelis for the two Shabbatot that our group was in Israel. Two speakers addressed our group: one an American who has been living in Israel for five years and is finishing a graduate degree at the Hebrew University; another, an Israeli journalist who made aliyah from North America over twenty years ago — nothing very radical. My desire in bringing any group to Israel is for the participants to be able to see Israel on its own terms and to meet with those who can help translate the Israel experience to visiting Americans. My firm belief is that when one travels to Israel one encounters two miracles: the miracle of ancient Israel and the culture that gave the world the Hebrew Bible, as well as the miracle of modern Zionism, our people’s return to history and to life. One visit is never enough.

In his recent column, my friend Danny Gordis takes exception to my position on Israel, based on a recent column in the New York Times that refers to my 5779 Yom Kippur sermon. The column depicts me as wishing “to save Israel from itself.” This phrase appears nowhere in my sermon, nor does it capture its essence. Rather, I urge the Temple Micah community to “stand on the narrow bridge of ethical Zionism forged by Herzl, Bialik, Ben Gurion, Jabotinsky, Begin and Rabin.” My sermon is a call for a fierce commitment to Jewish peoplehood and a plea to all American Jews to remain an animated part of the Zionist camp.

In this Yom Kippur sermon I seek to share my passionate love for Israel and all that country represents, as well as my deep concerns regarding current trends. I quote Israeli voices extensively including Eva Ilouz, Yaniv Sagee, and Mohammed Darawshe.

My sermon critiques the current Israeli government’s alignment with anti-Semitic regimes around the world and relates how even Yad Vashem has found a need to walk a fine line seeking to separate itself from some of the positions and statements of the current government. My sermon cries out against the government’s cold stance on African refugee asylum seekers and bemoans the destruction of Palestinian homes and Bedouin villages. My sermon quotes both Menachem Begin and his ideological forbear Vladimir Jabotinsky in support of my plea for what I term a strong ethical Zionism with a vital mooring to world Jewry. My sermon does not question Israel’s obvious security needs and takes a strong stand against those who support BDS.

My words speak for themselves as I call out Jews who are among the anti-Israelists of the world as those who “have …despised and scorned the birthright they have inherited.”

Many people will surely take exception to my positions on where Israel stands today.  These will undoubtedly include those to both the left and the right of me. My hope is that whoever they are, they will take exception to my views based on my own words and not how others depict them.

About the Author
Rabbi Daniel G. Zemel is the senior rabbi at Temple Micah, in Washington, DC, where he has served since 1983.
Related Topics
Related Posts
Comments